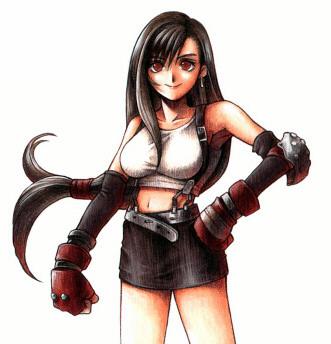 Purveyor of Tifa’s 7th Heaven, the hippest tavern in the Sector 7 Slums of Midgar, Tifa is always there to open a door to your rebel faction. She will babysit your children, and even allow them to run the bar while you attend to your business of anarchy. She will hold you to any and all promises you made in your childhood. She also works part-time as tour guide and souvenir photographer in Nibleheim.

Although she was once beaten out of becoming the newest bride of Don Corneo by a homely blonde girl, she still can be found poking around the Honey Bee Inn from time to time. Or so they say. She will smash and grind things if one is not careful. No need for speculation.

All joking aside, I sincerely do heart our dear miss Lockhart. She is one of the first females we find in the role-playing genre that not only can keep up with the boys when taken to full limit break status, she can open up a can of whoop-ass. No longer were female characters doomed to be the weakling healer you were forced to keep in your party!! That job was saved for Aerith.

She is one of the most popular FF characters amongst angsty teenage girls, inspiring loads and loads of bad fanfic. Not since the last time a teenage girl sat in her bedroom quietly listening to Taylor Swift songs by candlelight and drawing pictures of Marius and Eponine together at last has there been such inspiration.

Tifa/Cloud/Zack, Tifa/Aerith, Tifa/Barret, and may the gods help us, even Tifa/Nanaki and  Tifa/Pussypuff (otherwise known by the given names Red XIII and Cait Sith respectivly.) Examples of such found below.

Alternatively, she is equally as popular with the male gaming sector, because she has awesome combat skills. 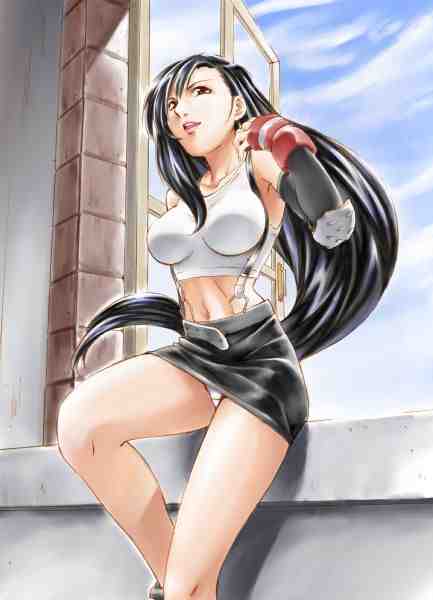 Eat your Lockhart out Lara Croft!!

*I would have inserted another horrible fanfic picture here, unfortunately doing and image search involving the aforementioned grouping of words lead to things unsuited to be published on this website*

Tifa has appeared in numerous games outside of FF7. She had appearance in the FF7 prequels Crisis Core, and Before Crisis; as well as briefly in Dirge of Cerebus.  She is an unlockable fighter in Ehrgeiz, Kingdom Hearts II, and even has DLC as a character model for Little Big Planet 2.

Next time you fire up your PHS and are thinking about taking a party out to the Gold Saucer for the Chocobo races, ditch the bitch in the pink dress and take my girl Tifa along; one of the strongest, hottest, independent chicks in gaming.