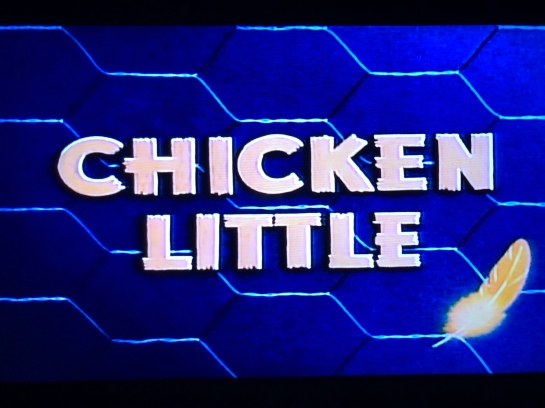 You may be expecting the movie with aliens, and Zach Braff, but if you caught the year, this is the short version. The one the Golden Girls were able to tell as part of an episode, though they called it Henny Penny. In either event, this is one I remember from when I was little, but watching it as an adult today gave me some unexpected dread with how relevant it still is. I’ll try not to beat y’all over the head with it, but I’m sure many of you will draw the same conclusions. Let the geeks begins!

We open in a farmyard, with classic voiceover narration, and are introduced to our characters. Cocky Locky, the head bird of the place. 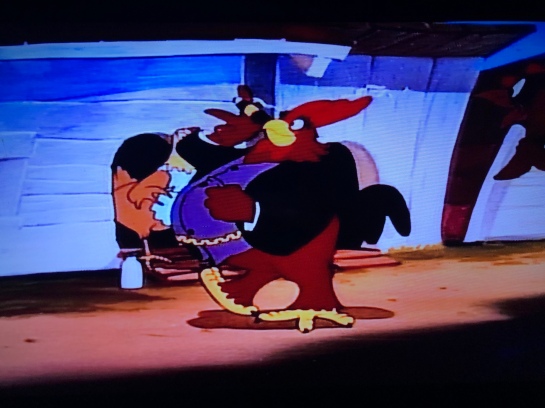 Henny Penny, and the rocking chair brigade, who poke their beaks into everyone’s business, rather than sticking to their knitting. Lovely, but it gets better. We see them clucking around a table, as the voiceover tells us they sound just like people. 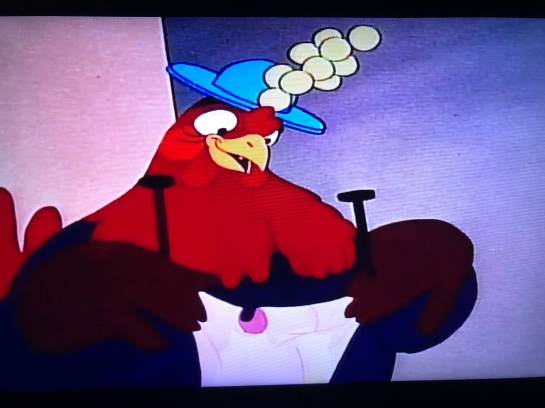 Next is Turkey Lurky and the smart set, who sit and discuss what’s wrong with the world. Then the jitterbirds, who are strictly there to show chickens dancing, and aside from being part of the future masses, serve no other purpose I can think of. 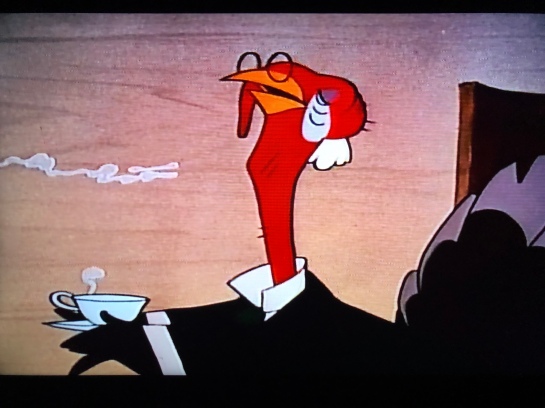 We then go to Goosey Poosey, Ducky Lucky and all the other gay ducks, all gathered when there’s something to drink. Going with gay being happy, not homo, their group are the drunks of the place. 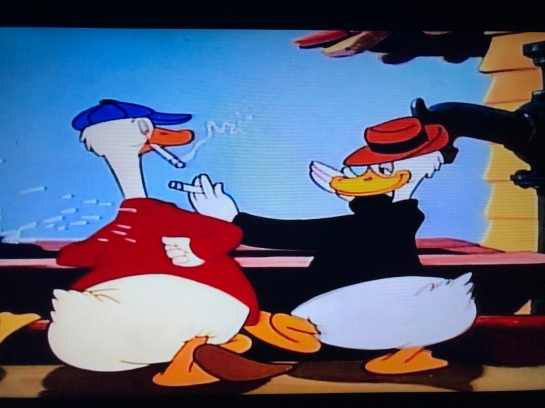 Finally we meet Chicken Little, playboy and yo-yo champ. I doubt he was hanging out with a young Heff back then. It’s fun how language changes and evolves. He’s stupid, but a good egg. Uh, thanks? 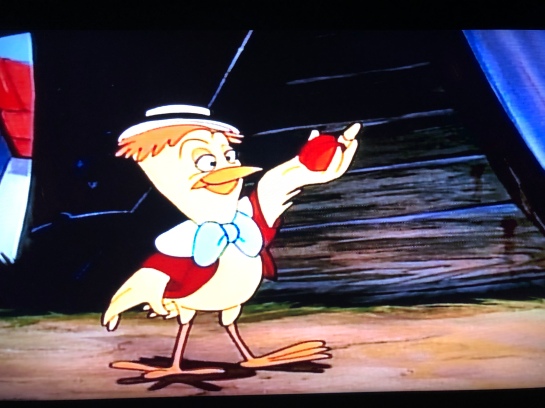 The story continues with the birds all being happy, since there’s a big fence protecting them. But wait! There’s Foxy Loxey, someone very much interested in eating everyone we’ve just met. He doesn’t, because of the fence, the locks, and the farmer’s shotgun. Much like Nick Wilde though, he’s a clever foxy. He’s gonna use psychology to get them all. He pulls out his book, and reads aloud. Quote: “To influence the masses, aim first at the least intelligent”. Let the modern parallels begin. 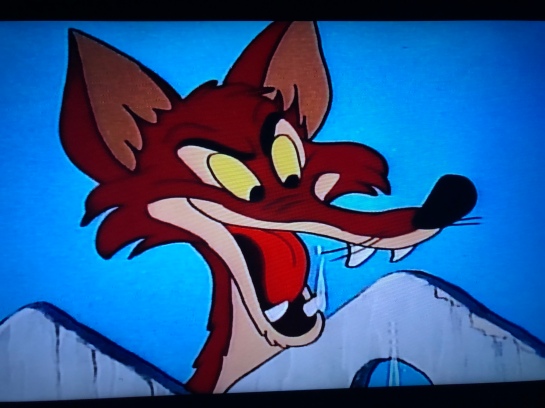 He looks over each member of the cast to find the one that’s nice and stupid, and settles on our title character. How he knows all of their names is a question we don’t get answered. I’ll just assume it’s from casing the joint. Back to his book, “If you tell ‘em a lie, don’t tell a little one, tell a big one”. He then rips a star of a nearby wooden sign, inhales an entire cigar, and blows the smoke through a hole in the fence, surrounding Chicken Little. Then, atop the fence, he uses foley tricks to simulate thunder, and a watering can for rain, before dropping the wood right on his head. He returns to the smoke hole, and says he’s the voice of doom. The sky is falling, and a piece just hit you in the head. Stay calm. Don’t panic. Run for your life! 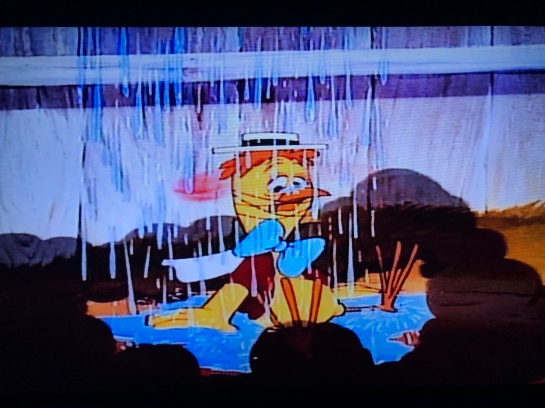 Chicken Little then tears through the area, stopping at Henny Penny’s to tell her that the sky is falling, and a piece of it hit him in the head. She freaks, and the two of them carry on, shouting about the sky falling as more locals hear them, look up, and start to worry. Soon, he’s gathered an entire crowd at the piece of wood, and is pointing, showing them the proof. Oh no! They’ll all be killed. Whatever will they do? Cocky Locky works his way through the crowd, asking what’s going on. Chicken Little again says how he was hit in the head by a piece of the sky. Cocky tells him that it’s just a piece of wood, and throws it back over the fence, hitting Foxy with it, and telling everyone to get back to their business. 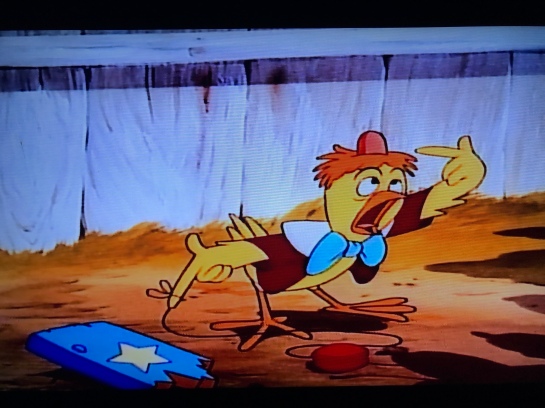 Foxy isn’t going to be outdone that easily, and goes back to his book for help. “Undermine the faith of the masses in their leaders”. I don’t know what psychology book this is, but I don’t recall anything like this when I took the class in school. We cut to Henny and the lady birds clucking about how Cocky would know what he’s talking about. Outside what I assume is the fence, and not their building, Foxy dawns some drag to get into character, and starts saying in a more feminine voice, but what is he’s wrong? They’d all be killed. The chickens start clucking up a frenzy. Outside the turkey coop? Is that a thing? *shrug Foxy has glasses, and says very formally that Cocky is showing totalitarian tendencies, and is trying to dictate to them. After all, shouldn’t they be able to judge for themselves if the sky is falling or not? Two groups down. Now with slurred speech, he starts whispering to the waterfowl how Cocky has been hitting the mash, and that he’s full of corn. Well, the local drunks start spreading it around the whole farm. He’s a chicken chaser. Um, isn’t that what roosters do? At any rate, the gossip catches up to Cocky himself with a resounding, “he’s not the cock of the walk anymore”. He’s visually upset. 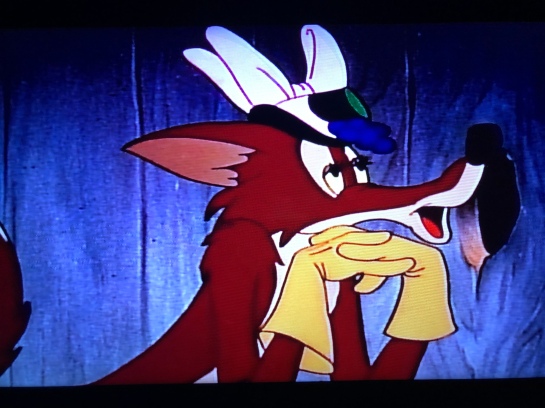 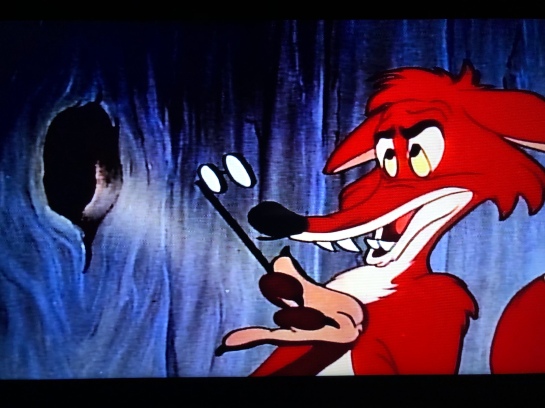 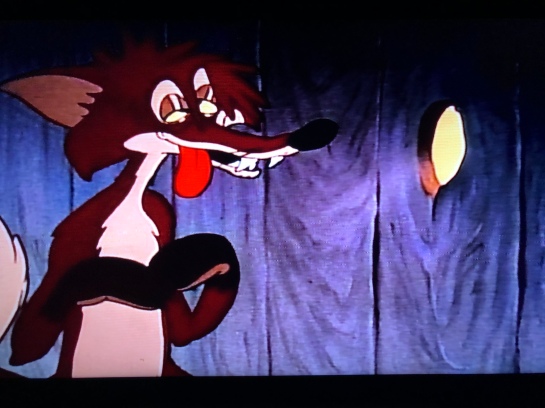 Back at his book we get another quote. “By the use of flattery, insignificant people can be made to look upon themselves as born leaders”. He whispers to Chicken Little that they’ll listen to him now. He can lead them. Chicken Little stands on a rock, declares himself their new leader, and that he’ll save their lives. Cocky says not to listen to the pipsqueak. There’s some back and forth about if the sky is falling or not, concluding with Cocky stating if it were, it would hit him in the head. Cue Foxy with a slingshot and another star. Cocky gets beaned, and that’s all the proof they need. Whatever will we do, Chicken Little? Thanks to no one else not being able to hear Foxy tell him to go to the cave, they all follow like the mindless sheep, er, birds they are. 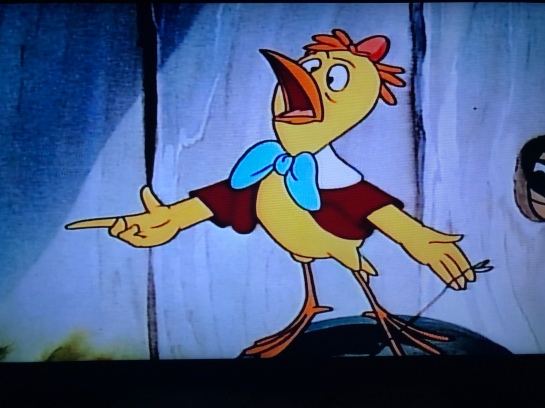 Foxy sets up signs pointing them towards the cave, as everyone breaks down the fence door and runs. As they all pile in, the narrator tells us that it will turn out alright. Cut to a fat Foxy licking a wishbone, and placing it among all the others. The narrator is shocked, as that’s not how it ends in his book. Foxy tells him not to believe everything he reads, and starts plays with Chicken Little’s yo-yo. That’s nice and dark for a Disney ending. Then again, it was seventy years ago. Either way, it’s dark for a modern audience as well, given what’s been playing out in front of the world lately. At any rate, stay geeky, and keep gabbing! 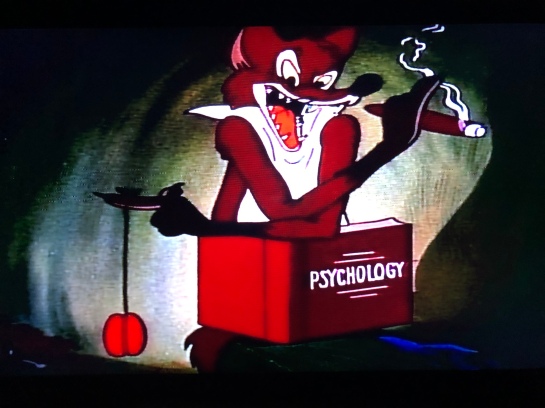 After writing this, I discovered it was supposed to be a WW2 warning, and that to drive the point home, Foxy was almost reading Mein Kampf instead of psychology. It all makes a lot more sense now. Doesn’t stop the modern parallel though. Sigh. Stay strong, America