An Introduction to Duckworld: A Howie Series Special Presentation
-by Bevianna Bones

The thought of discussing the 1986 cinematic gem that is Howard the Duck, excites me more than words can even describe.  This movie is so near and dear to me, I love it more than I would love my own offspring. It’s my happy place and has been for nearly 30 years. I knew that I wanted to share my love of this with you all, but was at a loss at how I could properly honor it in a single post. Therefore, in the spirit of our recurring Glorious Girls of Gaming series, I give you, The Howie Series. This series will allow us to encompass all areas of the epic greatness that Howie has to offer. Not just a straightforward boring review, but in depth investigations into all aspects.

For the opening entry in the series, I find it best that we start at Howie’s beginnings back in Duckworld. The opening moments of the film are often remembered as most folks favorite scenes, primarily for one snippet in particular. Duckboobs.

The duckboobs are so essential to the prologue of this film, these feathery twins nearly deserve their very own entry. But we’ll save them for another day.

Duckworld is seen in only the intro of the movie, but those 5 minutes are 5 minutes of genius.  The effort that was put into the details to recreate an entirely parallel universe to that of our Earth is astounding when you consider ALL of this effort was made for the introduction to the movie. It sets up the plot and let’s the viewer know two very important things.  Firstly, this walking, talking, duck-man is very much like us and we therefore will identify with his anguish and his triumph. He has pictures of his duck family and all of his favorite duck movies on the wall. 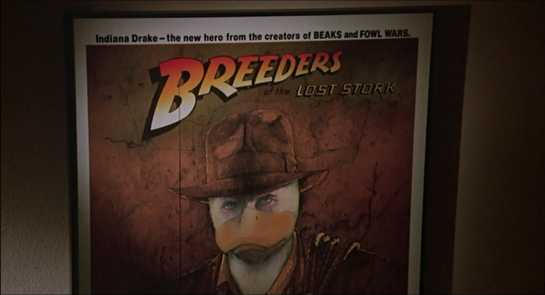 His apartment is clean, but lived in. He comes home to his duck apartment from a long day at his duck job, goes to his duck kitchen and gets in the duck fridge, grabs a duck beer, sits in his duck chair in what I assume is his duck living room, he reaches for the duck zinger (zinger is a proper term for an item also known as a remote) and switches on the duck television. 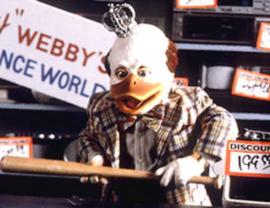 Secondly, not only do we all identify with the protagonist, but the minds behind this movie put so much joy, so much effort into the first few minutes alone must mean that we the viewers are in for a truly epic 2 hour movie event.

So there Howard sits relaxing, sipping away on the duck beer, bored with the television’s programming choices, he reaches for a brown bag and pulls out the latest issue of Playduck and sees what Miss October has to offer. Yep. More duckboobs. Not just duckboobs, ducksideboob! We just can’t get enough! 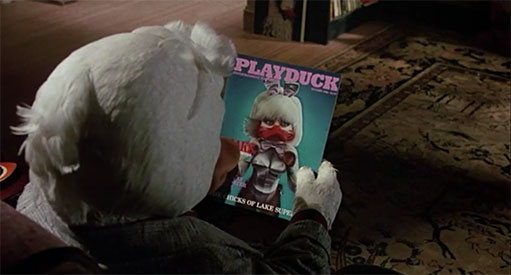 Howard must’ve gotten worked up during that jock itch commercial, because not only does he look at his duck crotch, he gives his duck package a little shake. It’s subtle, but it’s there. Trust me. Look for it.

While admiring this center-fowl’d beauty in all of her feathery delight, Howard suspects that there is an earthquake as everything starts shaking and rumbling.  This is our sign that its time to say goodbye to Duckworld.

Howard is flung from the comforts of his home and hurled towards earth via the Spaceray Armchair Express. On his way out of town, he goes careening through hi slumlord apartments, and we see even more midgets in duck suits portraying all kinds of apartment slum stereotypes. The old couple so miserable in each others existence that they aren’t even certain if anything had just occurred. Had the armchair express actually crashed through the wall, or had the duck wife simply been so hopeful for a small piece of excitement that she imagined the whole thing.

From one apartment to the next, we see the infamous duckboobs as she bathes away in her bubblebath sipping one too many cocktails. We see the elevator where the duck construction worker has brought home what I have to assume is a duck prostitute. 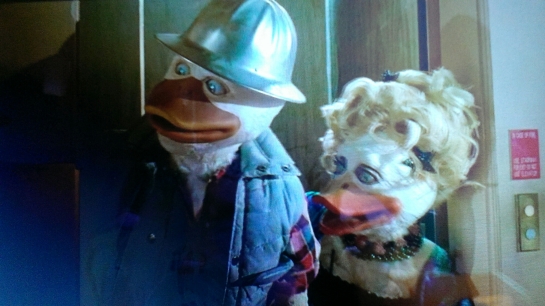 Then out onto the streets, we see the funky bunch give a collective “DA fuck?!” up towards the sky. Note the blackface duck. Duckworld is a progressive place.

Howard is ejected from the stratosphere and an ominous voice narrates an abbreviated version of the beginning of life. By the way, did I mention Duckworld is shaped like an egg?
Yep. It is. So creative the minds behind this.  More on this another time. But for now, all we really need to know is that it begins with, “COSMOS!…”

And ends with “HOWARD the DUCK!” as Howie is catapulted through the universe, perhaps million and billions of light years away through a giant funnel straight down to a rape alley somewhere in what we later discover to be Cleveland.
What will happen to our feathered friend? What “fowl” plan is afoot?? Tune in next time. Same ducktime. Same duckchannel.