Greetings, geek fans! With the new Captain America Civil War trailer released, I’m more excited than ever for this movie to come out. In the interim, I decided to dive back into my graphic novels, and re-read the comic arc that the upcoming movie is based on. Like any movie based on a book, even a comic book, there will be changes and omissions from the original story. You can do anything on paper, but the reality of funding and casting the full story in the MCU would need a few billion dollars, and two parts, just to do it justice. Those who are only familiar with the MCU, are in for a treat, as this is one of the richest, and most thought-provoking stories Marvel has done. Let the geeks begin! 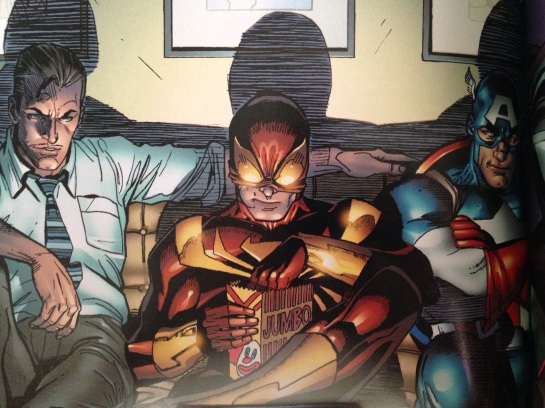 As I’ve stated before, most of my comic experience is in the Spider-Man and X-Men area. I only dabbled in the rest of the comic universe during various crossover events like Maximum Carnage, Onslaught, House of M, etc. So, I may not know all of the details of the heroes as a whole, but I know bits and pieces. I say this, because I may comment on something without backstory, and I don’t want to be read for it. Anyhow, in the road to the civil war, several events take place. Anthony “Tony” Stark travels to Washington D.C. with Peter Parker to discuss the legislation of the superhuman registration act. While there, the Titanium Man attacks after a meeting that was so secret, no one else was even supposed to know about it. Peter battles the Titanium Man in his Iron Spider outfit, which some people hated, but I actually enjoyed. Titanium Man gets away, and as Tony appears before the hearing committee again, Spider-Man shows footage of the fight, and tells them that if heroes identities were known, their families would be in danger from such attacks as well. The only way the government will allow his testimony is if he takes off the mask, and swears it under oath. Having Aunt May and Mary Jane to think about, he declines. Tony later thanks Peter for his effort, and Peter questions how Titanium Man even knew about the meeting. He doesn’t quite call Tony on setting things up to go his way, but it’s heavily implied. Later, we the audience see Iron Man paying Titanium Man for his services. Peter, exhausted, falls asleep watching tv as there’s news about an incident in Connecticut, leading to… 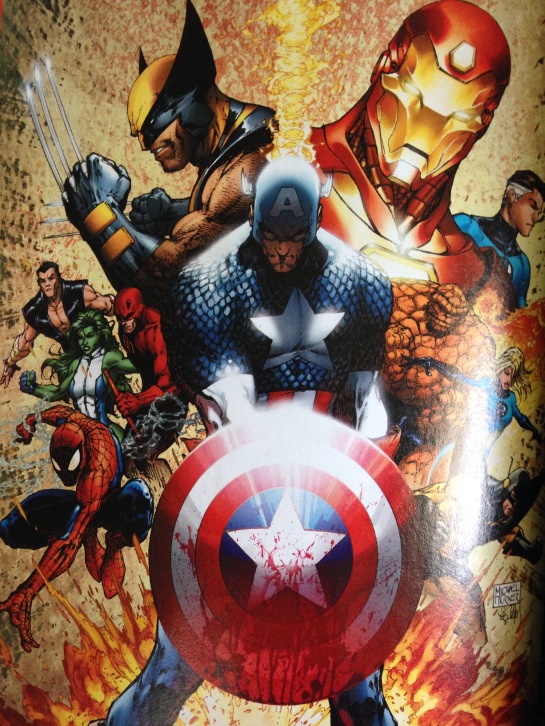 I’ve often said that reality tv will be the death of us as a people. This is no exception. In Stamford Connecticut, the New Warriors are busy filming their reality show. They’ve found Cobalt Man, Coldheart, Speedfreak, and Nitro. As Speedball gets the intel, Microbe says they’re out of their league. Speedball says it’ll be their biggest ratings for season two. Sadly, before they can take action, Coldheart sees them, and goes to warn the other villains that it’s a raid. The New Warriors attack, and Speedball cracks a few jokes since they’re still being filmed. Coldheart recognizes them from their show, not their unfilmed heroic deeds, and talks a little trash. Night Thrasher takes objection to being called a bondage queen, and asks for an edit. Meanwhile, Nitro is getting away. Namorita isn’t worried, and takes off after him. She slams Nitro into a bus, and tells him not to bother with explosions, as she’ll just hit him harder. He tells her that they aren’t the losers she’s used to, and that they’re playing with the big boys. Nitro then explodes, taking out more than a block, including a school full of children. Damn! 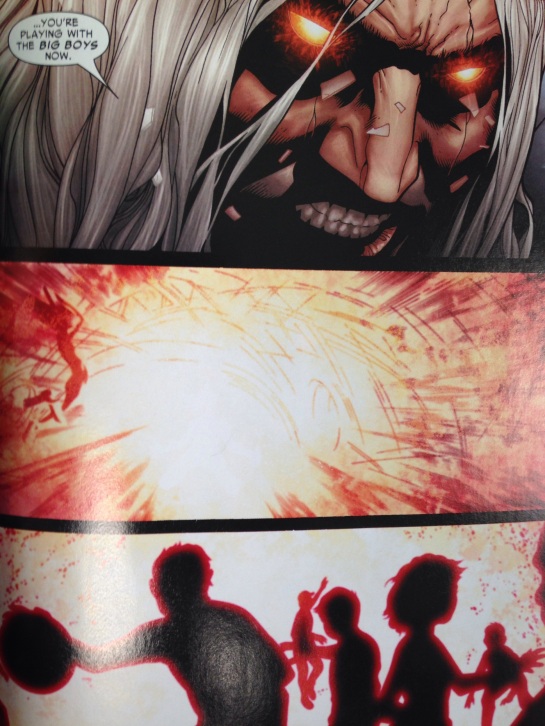 Next scene, Captain America, Iron Man, Falcon, the Fantastic Four, X-Men, Ms. Marvel and more are helping with the clean up, and body recovery. Cap is clearly upset that so many children were killed. Tony says the whole country saw the tape of Speedball saying it was all for ratings. Meanwhile, Marvel Girl, Rachel Summers, is using her telekinetic powers to lift ruble off some of the survivors. Goliath says they won’t just be after mutants now. After the Hulk trashed Vegas, and Wolverine threatened to kill the president, this will be the straw that breaks the camel’s back. On CNN She-Hulk says banning heroes while there are thousands of super villains in the world is impossible. She doesn’t see issue with them being trained and carrying badges though.

At the Stamford memorial, a grieving mother gets Tony’s attention, only to spit in his face. He tells her he had nothing to do with what happened. She calls him on his shit, saying he’s the one who funds the Avengers with his blood money, and encourages people with powers to be vigilantes. Her Damien’s blood is on Tony’s hands. In the crowd, J Jonah Jamison is making sure Peter is getting pictures of this. Another CNN report says that their powers can be like nuclear weapons, and asks if they should be tested before being allowed to work in people’s communities.

New York City club scene. The Human Torch is apologizing to his date for being late, swearing that he was saving orphans from a burning building. Sure, Johnny. Now try to sell her the Brooklyn Bridge. Mr. Storm cuts to the front of the line and is told Paris and Lindsey are already inside. The crowd gets mad, since as “normies” they have to wait. Johnny says next time they stop Galactus, he’ll let them use his club pass. Someone asks about the next time he kills kids. Another says he shouldn’t be strutting around, he should be hiding in shame. Johnny says he has nothing to do with Speedball or the New Warriors, and calls them C-List, tops. Someone calls him a baby killer, and a bottle gets smashed on poor Johnny’s head. The crowd holds him down, and beats on him. That’ll teach him to cut in line.

A news report states the Human Torch is just another of a series of attacks on the New York super hero community. In the Baxter Building of the Fantastic Four, Avengers young and old, the FF, some X-Men and others are wondering what will happen next. Dr. Strange asks if he’ll be forced to be a federal employee, or risk a warrant for his arrest. Dr. Richards says that Strange is one they’re hoping to seek compromise with. Wasp wonders if they’ll be turned into civil servants, with vacation and pensions. Iron Man asks them why they shouldn’t be held accountable to the public. Patriot of the Young Avengers wonders if they should go on strike. That’s cute, sweetie, but grown-ups are talking. Iron Man says that Stamford was a wake up call, and that being public employees makes sense if it will help people sleep. Falcon says he doesn’t want to be turned into a super cop. Yellow Jacket says he’s surprised heroes have been tolerated this long. Spider-Man says that if everyone is forced to work for Uncle Sam, some of them may just hang up their tights. Sue Storm states they’ve always been public, and never had a problem. Daredevil says this is the end of they way they’ve done business, he can smell it in the air.

SHIELD Hellicarrier. Agent Hill tells Captain America that right now twenty-three of his friends are meeting to discuss how super people will respond to the president’s solution. Cap doesn’t want to judge. Hill says they’ll never be close like he and Fury, but he needs to respect the badge. Cap thinks the plan with split them down the middle, and put them at war with each other. An agent questions why heroes wouldn’t want to be trained and paid. Another asks how many rebels there would be. Hill asks if it’s anyone major. Cap replies people like Daredevil and Luke Cage. Hill states that’s no one he can’t handle. The proposal goes to vote in two weeks, and could be law in a month. The Avengers need to be out there with Cap leading them. Cap refuses. He’s not going to arrest the very people who put their lives on the line for their country. Hill tells him to obey the will of the people. Cap says heroes need to stay above politics, or Washington telling them who the villains are. Hill says the villains are the ones in masks, refusing to obey the law. Several guns are cocked, and Cap realizes he’s surrounded. He says that masked heroes have been a part of the country for as long as anyone can remember. Hill replies that he needs to go legitimate. Cap orders them to put their weapons down. Hill says he isn’t in charge, she is, and orders the agents to try and tranq Cap. He uses a SHIELD agent as a, well, shield, and fights his way out. It’s very Winter Soldier movie scene. Hill orders all agents to stop him. Cap busts out a window, lands on an incoming jet, and uses it to escape. 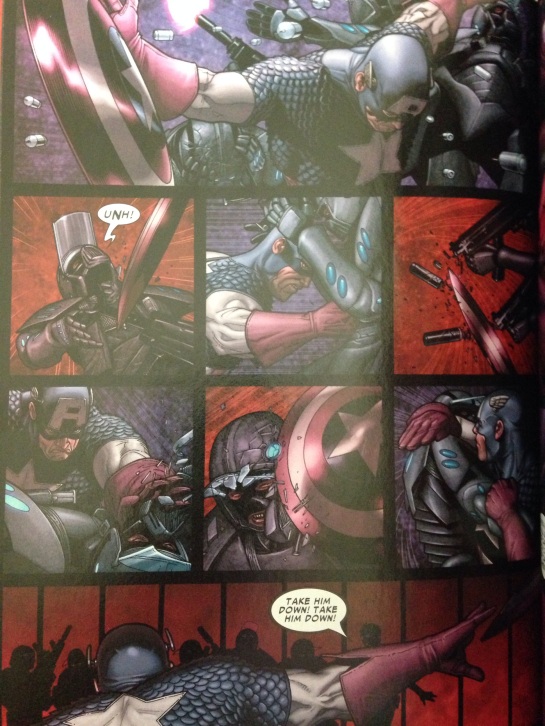 Back at the Baxter Building, Spider-Woman asks who the big bald guy is. Dr. Strange says that he’s the Watcher, not like Giles was a watcher, but he’s the sort that comes to record moments of great change and upheaval. Him being there doesn’t bode well.

Outside the White House, a crowd has gathered with “guns are licensed, why not powers” and “justice for Damien” signs. Um, Damien isn’t the only kid who died, but let’s just focus on him. Sure, we’ll go with that. No one’a pain matters but yours. Also, you can’t license a natural ability, or one you got by accident. There’s no way to stop something that you have no way of giving up, or giving away. You aren’t on a three day waiting list to pick up your super powers because of the Damien bill. Stupid, ignorant, masses jealous of what they can’t have for themselves. Inside the White House, we hear the story of Cap taking the pilot out for a burger after they landed. The president says with Cap going underground, anyone who disagrees with the registration act now has a figurehead. Stark says to continue as planned, and leave Captain America to them.

There you have it, ladies and gents, the opening issue of the Marvel Civil War. To borrow their promotional phrase, Whose side are you on? I know where I stand, but I want to know your thoughts. Until next time, stay geeky, and keep gabbing!