Greetings, geek fans! Comic Con has come again in good ol’ SL,UT, and I won a free multi-pass to the festivities. Now, I’ve dressed up before, but it’s always been on Halloween, so even though I’ve done Dark Willow, Android 17, and Luigi, I don’t consider them as cosplay, since they were costumes. There’s a subtle difference, which, as fellow geeks, I don’t need to explain to you. Anyhow, I decided that I wanted to dress up this year, and go out in broad daylight. Now, I know what you’re probably thinking, I went as Loki. Wrong. I want to do things to Hiddles- er, Loki, not be him. Having seen Suicide Squad, and knowing every girl with the body for it would try it, I decided I also wanted to be Harley Quinn. However, as I’m not a drag queen, and have no such aspirations, despite all the Drag Race I watch, I opted to go for gender-bent Harley. Meaning, the male version of a female character. That way, it was open to my own interpretation, rather than taking her exact look and wearing it. I needed help though, so I recruited Bri Bones.

Don’t dream it, be it

We went shopping for ideas. Due to personal setbacks, I didn’t have a ton of $$ to invest in my endeavor, but I knew I had to spend a little cause I didn’t want to look busted. First stop was a Spirit Halloween store. As expected, they had a Suicide Squad section. Also as expected, all their attire was made for skinny bitches. Not a read, just a statement. Although a lack of options for bigger girls like myself was disheartening. People of any size should be able to wear the costume of their favorite person, without being made to feel like a fat cow. Example, the largest official shirt they had was an XL, and I looked bad in it. Not bad ass. Bad. Joshie Jaxon, sashay away, bad. You get the point. Largest coat, also an XL. I could get it on, but if I moved my arms, it’d rip. Granted, I’m broader in the shoulders than the average woman, so I don’t fault them for that. I did manage to find a pair of official shorts in, you guessed it, XL. They fit, but didn’t leave much to the imagination. Bri suggested I tuck, but this wasn’t drag, so I didn’t care if someone saw my punchline.

Next was a thrift store. I found a great V-neck white shirt in my size at the very first place. Clearly the universe was on my side. Now came the tricky part, makeup and accessories. I’m a jeans and tee kinda guy, and not a fashionable gay by any stretch. I did find some gloves in the color scheme I needed. All my shoes are black slip-ons. I didn’t have the money for new white shoes, so I altered my existing pair. I went to Michael’s and got spray adhesive, and two vials of glitter, one red, one blue. I also grabbed a thing of fabric paint and a pen so I could make my shirt. I may not be fashionable, but I’m crafty. I sprayed my V-neck red where I needed it, and blue for the one sleeve. After letting it set a day, I used my printout of Daddy’s Lil Monster, and drew over it with my fabric pen. It looked so cool. I was getting excited to show off all the work I was putting in. I managed to mostly keep it a secret, save for a few close friends. Now it was time to alter the shoes. I had help from my roomie. Spray adhesive. Sprinkle glitter. Repeat. I love sparkles, and even by porch light, these babies were sparkly. While they dried I painted my nails red and blue. I was so excited for this all to come together that I had problems sleeping. This was like geek X-Mas for me. It needed to arrive. 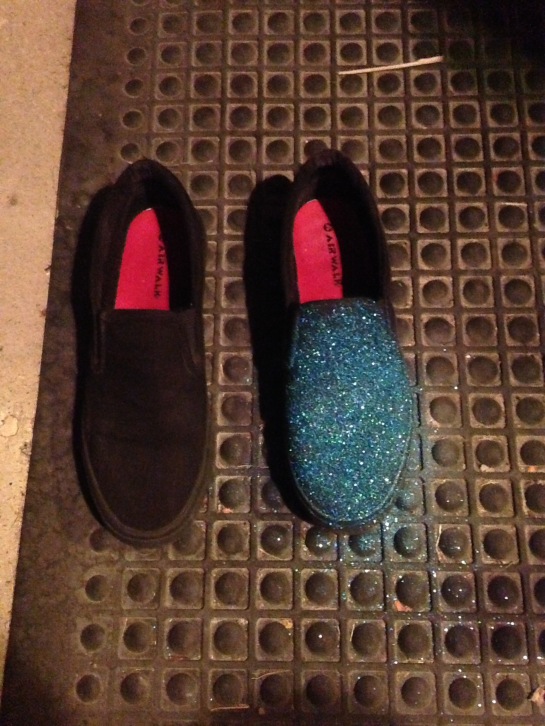 Morning of the big day. I’m showered, and ready. Bri came over to help with my makeup, cause he’s a theater queen with the skills to not mess it up. Ladies, I don’t know how you do it, but I can’t stand eyeliner. Watching something come towards my eye makes me flinch. Bri had to hold the back of my head cause the instinct to recoil was so great. He got the liner on. Paled my face slightly more than it naturally is. Got my heart on. Giggity. And added the pink and blue to my eyes and hair. I got my lipstick on, got the glitter shoes off the porch, and I was ready. I was feeling fierce. Until I realized I had to walk out my front door looking like I did. I have confidence issues. Those went away on the drive to the event. I was imagining the looks on people’s faces. I was also hoping I’d be the only male Harley there. It is Utah after all. Walking into the Salt Palace and being around my people, it was right. I was living my fantasy, and loving every minute of it. I’d see people pointing me out to their friends, and there were more double-takes than I could count. I’d smile and wave. There were so many great people there. All enjoying their hard work. (Don’t worry, I’ll post all the cosplay pictures I took later.) I could see why drag queens feel different when they’re dressed up and painted. I was waving at people. Talking to people. Stopping them for pictures, and getting stopped myself. Normally, scary for an introvert like myself. Not at that time. Several people high fived me. One girl gave me the best death glare, like I had no business dressing the way I did. Guess what, I can do whatever I damn well please. You’re just mad I looked so good. Several people told me I was the best Harley there. One even said I was in better shape than most of them. I spend my nights on the couch, but thanks! There was one guy who asked if he could spank my ass, which I allowed. Then his wife/girlfriend wanted a picture of him doing it. Why not? Enjoy the moment. I did see a total of three other male Harley’s over my six hours. The last one made eye contact with me, and I shouted out “hey, girl!”.

It was a fantastic day. I found a few lady-Jokers who I called “Puddin'”, and some male ones I called “Mista J”. It was the most fun I’ve had in recent memory. My leprechaun friend even said seeing me was the highlight of her day. That’s why I do the things I do, and write the things I write. I want to bring people that moment of joy. That moment where work, kids, cars, bills, all of it just fade away. As long as I’m able, I promise that I will spend my time entertaining, whatever form that may take. Until next time, stay geeky, and keep gabbing, Puddin’.