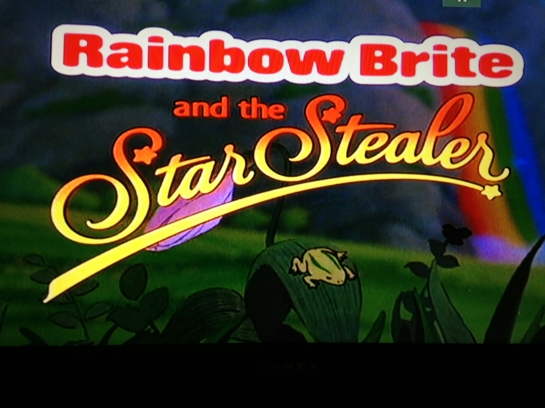 Rainbow Brite and the Star Stealer
–by Joshie Jaxon

Ominous dark castle, complete with fabulous queen. However, to say she’s a bit of a spoiled diva would be an understatement. She wants her diamond, and no one can have it but her, despite the old purple Sprite trying to warn her against it. Be glad she didn’t listen, or we’d have no movie.

Morning in Rainbow Land. The bees are buzzing, and one even stings Starlight in the ass. Let’s be honest, it’s not the first time that’s happened. If you’re a fabulous white horse, with a rainbow mane and tail, and star tattoo on your head, you’ve been around the barn before. Time for the opening musical number. Starlight wanders Rainbow Land waking others up, cause there’s work to do.

The Color Kids, actual name, go to their balconies to join in the song while Twink, yep, his name is Twink, goes to wake up Rainbow Brite. They all gather around, and sing our heroine awake. During this song, I noticed that the green one, Patty O’Green, not only has pigtails, she has band aids on her knees. Draw your own conclusion. Back to the song; they all proceed outside, complete with Red Butler doing a finger wave of fabulousness. Rainbow says she needs to head to Earth and start spring. Cut to Murky & Lurky. Yay! It’s spring! Murky doesn’t care, he doesn’t want color anymore, anywhere. Lurky just wants to ride Rainbow’s horsey. There’s an inappropriate joke in there somewhere, but there are others, so I’ll let it be.

Rainbow says she needs to go talk to Stormy. Winter is over, and it’s time for spring. Stormy is looking all kinds of sassy with her purple hair, and I’m-not-done-yet attitude. She summons her purple horse, who I swear tops Starlight when the bees aren’t, and they try to get away. If Rainbow gets them, they won’t have any fun for 3 more seasons. There’s no horse in the universe that can outrun the magnificent Starlight. Really, queen? Naturally, Rainbow wins, and Stormy pouts about it.

Rainbow heads to Earth to bring the spring. She saves a boy with a rainbow, naturally, as she descends to the ground. For the audience at home, she announces that he’s the only one on Earth who can see her, which is why no one is freaking out about a rainbow-maned horse coming out of the sky. She shoots her rainbow on the ground, and nothing happens. Performance issues aren’t just a male issue it would seem. Back to Rainbow Land!

Flying robo-horse crashes in Rainbow Land. Any idea who he’s searching for? Bueller? Bueller? Alright pencils down. Yep, he’s after Rainbow Brite. Murky tries to claim that he’s her. Bitch, please. Robo-horse ain’t buying it. He mentions a diamond, and heads for town. Murky, our “villain” decides he wants hear about the diamond that robo-horse mentioned.

Not only is Rainbow having performance issues, the Color Kids are too. They can’t get everything up and running. It’s alright, we can just cuddle. The Sprites report a flying horse, and everyone assumes it’s Starlight. They all run outside, and greet On-X, who’s a few circuits short of a motherboard. He stutters, if that’s the right word for it, and conveys what his mission is. Rainbow needs to get to Spectra, the diamond plant, which she says is the light of the universe. Stormy eavesdropped, and wants to help. Rainbow tells her she can, and summons the magic traveling rainbow!

Spectra, which would be Spectracular if it weren’t covered with some nasty-ass yarn looking stuff. The Sprites that are there have OCD, and do nothing but polish, polish, polish. With a diamond that big, you’d have to. They warn her about the glitter bots, that aren’t nearly as fabulous as they sound, despite having rubies for hair. Rainbow and Starlight pretend to be enslaved, acting as though they’re helping cover the planet in yarn. Even though they’re robots, they know better, and try to capture her. Cue the dramatic chase scene.

Starlight says he will not wear booties. Please, I’m sure you’ve worn worse. Besides, you are not running those hooves on diamond, because you might scratch it. Wait, really Sprites? You’re worried about diamond getting scratched? That’s not how-  you know what, I’m gonna let this one go too. We’ve got lots to cover. During their escape, they get stuck in a lake that clearly isn’t water. Just as the glitter bots close in, On-X manages to get them out of the lake. They crash against one of the diamond slave huts, and we meet Krys. He bitches that robo-horse brought a girl. He sent him for help, and he brought a girl?! Yay, 80’s sexism. Krys, lemme help you out here, she’s the title character. She’s not just, a girl. Thanks. He tells Rainbow that The Princess, no affiliation with Drag Race Season 4, is the one after Spectra. That suits Rainbow just fine. She’ll Kiki with her, and work this whole thing out.

Earth, still not spring. Phil must’ve seen his shadow. However, the media being what it is reports that everyone is depressed, and why bother finishing the news. Real professional there. Earth kid’s mom bears a striking resemblance to April O’Neil. He goes to his drawer, and digs for the key to Rainbow Land, but like Rainbow and the Color Kids, Brian too is having performance issues. Odd occurrence for a pre-teen boy, but it happens. Maybe if he stopped thinking about girls?

We ride the rainbow to the ominous castle from the opening. The Princess doesn’t want to talk to children. “They never bring good presents”. What’s wrong with macaroni pictures? There was glitter on it. Geez, what a bitch. She blows the kids away, but Rainbow presses on. Krys says no, and Rainbow tells him to turn back then. He can do anything a girl can. Except be the title character. All T all shade.

They enter the castle and are greeted by shadow monsters, that merge into a giant. Rainbow encases it’s head in a, you guessed it, rainbow. Seeing it’s power, The Princess wants that belt. Krys runs and tells Rainbow she needs to be told where to run. She retorts that she’s not used to running away. That’s right, girl power. Suck it, Krys. Uh oh, trap door to super fun happy slide. Luckily, it gets them to an elevator, that takes them right to Princess. Great security feature, your highness.

Princess is holding her emerald like it’s a pet. Bitch is cray cray. She demands Rainbow’s belt, and is told no. Magic showdown, Princess power vs Rainbow’s rainbows. Princess wins and takes the belt for herself, while Rainbow and Krys get tossed in the dungeon. 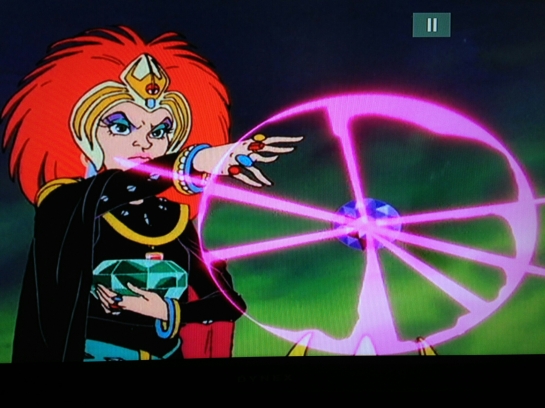 Back in Rainbow Land, Stormy is trying to help the Sprites mine color crystals while the kids keep working on the color generator. You go, Stormy!

In the dungeon, Rainbow says they need to escape. I guess the accommodations aren’t to her liking. I don’t blame her. Gothic motif, no thank you. It’s time for the horses to get their 15 minutes. Starlight has On-X create a diversion, he’s off to save Rainbow. Princess doesn’t appreciate all the noise, and looses her curlers over it. She doesn’t want a horse in her room. She must not be related to Catherine the Great. Anyhow, he retrieves the belt, and Princess is mad about the teeth marks. That’s a first. No matter, the belt is back where it belongs, and Rainbow and Krys are out of there. At least until Princess, now in full diva attire, uses her powers to banish them. The rainbow can’t outrun her dark magic, and they’re taken to a prison planet.

Yet another performance issue for poor, Rainbow. Her power is all used up. Starlight is taken into custody, and the warden says if she wants him back, she’ll give him the belt. Kinky bastard. Meanwhile, Murky and Lurky, having been caught on Spectra as well, are also on the prison planet. Gotta keep the comic relief around after all.

Giant lizard things, in inexplicable monk-like robes, attack Rainbow and Krys. Rainbow is knocked into an underground cavern, and falls into the water. Nude giant lizard things down here. Dunno why the surface ones get clothes. Oh well. Rainbow climbs to get away, and finds the purple Sprite, Orin, from the intro. He gives her some star sprinkle Viagra, and her mojo is back. She shoots one of the lizards in the face. You ever get rainbow in your eye? It burns!

Rainbow and Orin escape, and he says they need to save the universe. She says there’s one thing to do first. He questions what could be more important than saving the universe. Why, saving the boy of course. She can’t be badass if she can’t show the boy she’s better than he is. Orin gives her a weapon for Krys when she saves him, and she’s off. With Starlight retrieved, the weapon is delivered to Krys. With a little rainbow power shot through it, it allows Krys to freeze the warden solid, and they escape. 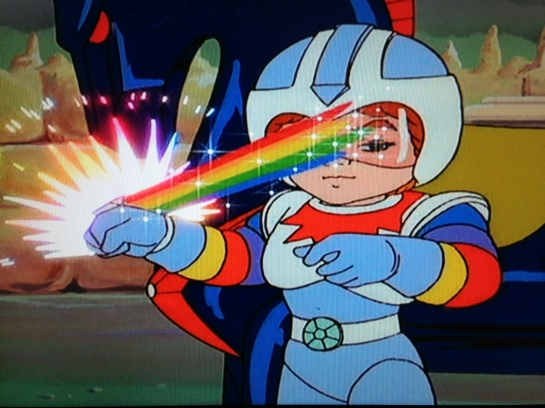 Murky and Lurky get caught by prison planet glitter bots, and are brought before The Princess. They claim they will stop Rainbow Brite. Her guard questions how they can do what his forces couldn’t. Murky says he’s been waiting for her to lead him to all her belts. Princess likes the sound of that. She’s an accessory girl after all.

Orin tells Rainbow and Krys to destroy the jewel that gives The Princess her power. With the prism weapon, and Rainbow’s power, they can’t lose! Now our heroes just need to break into the castle that they worked so hard to escape. Gotta love it.

On Spectra, the OCD Sprites and Orin are working to cut up all the yarn covering it. Good luck, little guys! On Earth, Brian is watching a blizzard, and willing Rainbow to help them. We all worship fierce divas, Bri. You’ll discover that as you get older.

Our heroes confront Princess in her chamber, and she delights that the belt is back. She uses her dark power to take them on, but they have teamwork on their side this time. Even with that, it’s isn’t until the comic relief crashes in that the tide turns, and they’re able to destroy the dark jewel of the Princess. Princess doesn’t care, she’s taking her spaceship to a Spectra to claim her giant diamond.

When we return to Spectra, the Sprites and Orin have managed to overthrow the glitter bots, a task that never occurred to them before now. Princess arrives, and Orin is worried if she crashes that the planet will shatter into a million pieces. Again, planet of diamond. Shattered. From the impact of a spaceship. I know, that’s where I draw the line. It’s what I do, it’s not going anywhere. You’ll learn to appreciate it.

Epic finale! Rainbow summons a rainbow that smacks into Spectra ahead of The Princess, and sends her flying. Spectra is lit back up, and sparking like Liz Taylor.

Winter fades on Earth, and birds start singing. Rainbow takes Krys to Rainbow Land, and introduces him to her color minions. Group pose of newfound friendship, and scene.