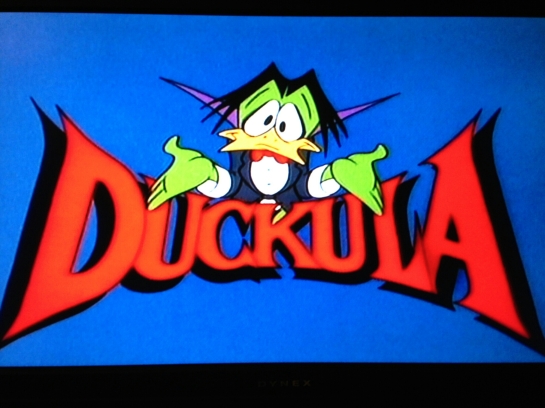 What an odd first episode title. Then again, it was the 80’s, and it is British. However, before we get to the episode, we need to appreciate the opening credits. They tell the tale of the Duckula line, and how they can be revived once every century. This time around they used ketchup instead of blood, and as a result, this incarnation is not evil, and is a vegetarian. On with the show! 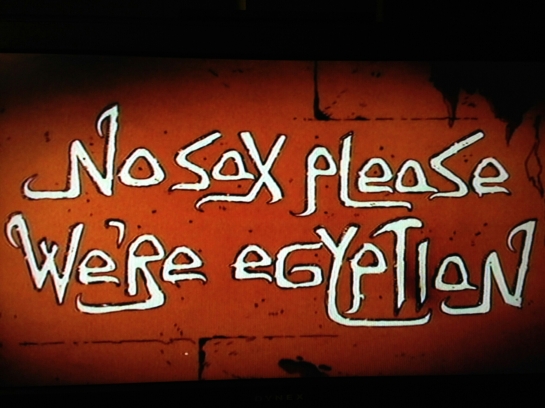 Castle Duckula. The Count waits for his food, telling Igor he hasn’t paid the power bill since the last time they brought him back to life. Nanny, his hulking lady servant, with one arm always in a sling, crashes through the wall. He reminds her to use the door, so she leaves, and crashes through the door instead. Tired of nearly being killed by Nanny, the Count says he’s going to run away, stating last time she killed three chambermaids and a footman, to which she replies, “They were only part time”. I want to like her. Igor takes the Count to the portrait gallery to remind him of his proud name and inheritance. 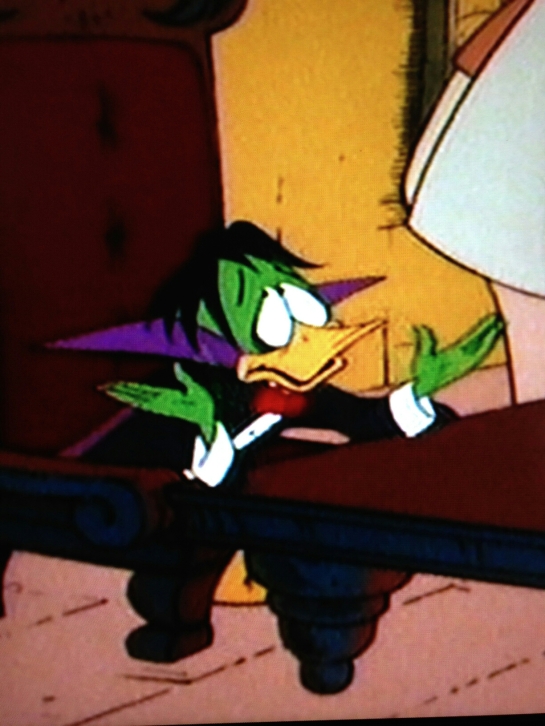 We see some crows in masks, they’re reading a guidebook on Castle Duckula, and decide to go rob it. As they scale the outer wall, we hear Nanny ooohing as she dusts. The crows hear it, and assume it’s a werewolf. Nanny says to herself, “Give it a tickle with me feather duster, and it’ll be as right as rain.”. The crows think she’s talking about the werewolf, and say “She’s tickling it with a feather duster, no wonder it’s howling”. I love the Brits. 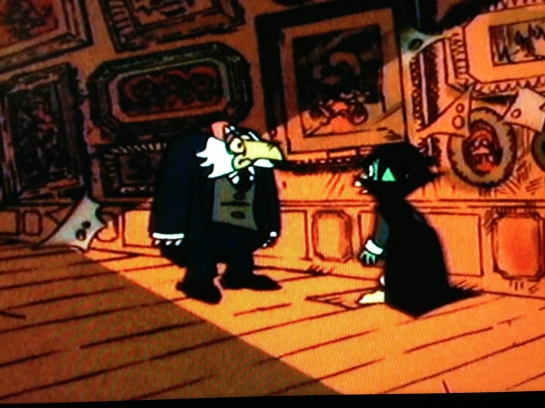 Meanwhile, Igor is telling the Count about his ancestors. We hear the tale of the Archduck that explored a pyramid in Egypt, and was never heard from again. Igor makes mention of the mystic saxophone, yes, mystic saxophone, that gives whoever plays it the power of life and death. Duckula just wants to use it to be famous and fill stadiums. Poor Igor, he wanted a bloodthirsty Master, and instead he got this. He hopes the sax will make the Count evil. As the crows ponder how they’ll travel the 3000 miles to Egypt, the Count runs down to an upright coffin, announcing his destination, and the castle teleports there. There’s no in episode description for why the castle has/is a transporter. Hashtag mysteries of Castle Duckula 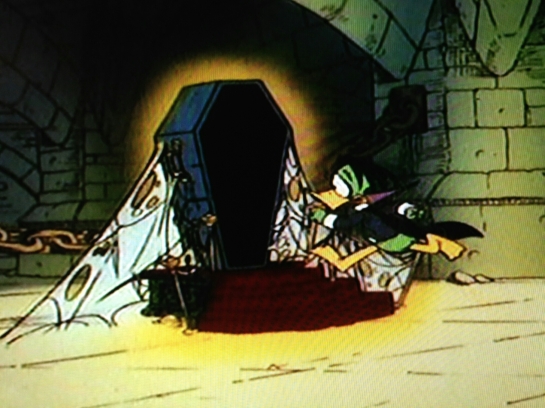 They enter a pyramid, and begin to explore. Igor points out a statue of Anubis, and Nanny covers her little duckyboos eyes. She won’t have him looking at people with no clothes on. He tells her it’s Anubis, not a nudist. Yay wordplay! Pre-Family Guy cutaway to the cuckoo clock in the castle. It has two Statler and Woldorf style bats that tell a lame joke, complete with laugh track. So, that happened. Back to the pyramid. Duckula finds a statue of Serket. Nanny says it’s small, to which the Count quips that it’s a short Serket. He’s gonna be famous with material like this. 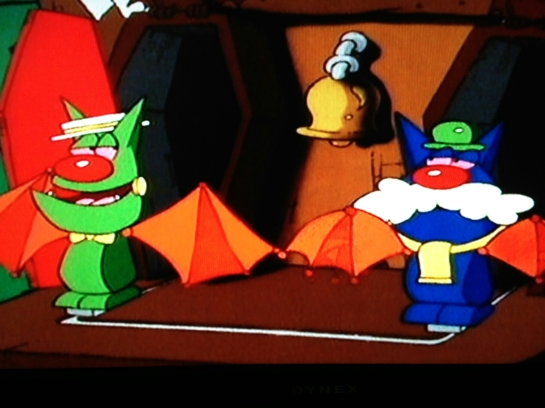 The crows plot how to take out the Count. They rig a stone slab to a rope and attach it to each entrance of a chamber. If only Nanny used doors. She crashes through the wall, bypassing their trap. Duckula goes back to grab the rope for later, and the crows are crushed off screen. Being toons, they survive. Next they plan to use a boulder and giant rubber band. It’s worth pointing out this is the late 80’s, and Wile E Coyote has been around a few decades. They should already know this isn’t gonna work. Oh well. The crows are smashed again. Naturally. 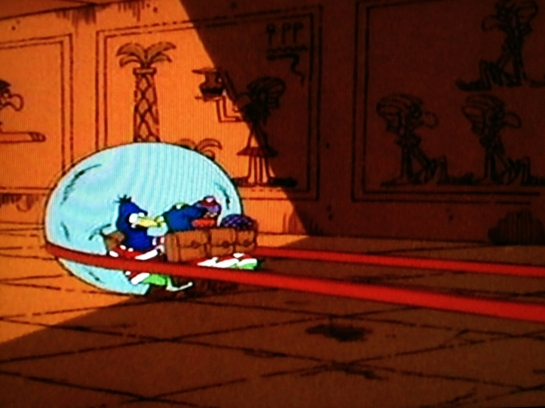 Duckula and company conclude they must be getting closer to the chamber, and to look out for traps. The Count falls for one, cause he is the titular character, after all. He wakes to a priest, Hoomite, and his assistant, Yubi. Anyone else see where this is going? The priest says “who might you be?” And we go into a very Who’s on First style exchange. 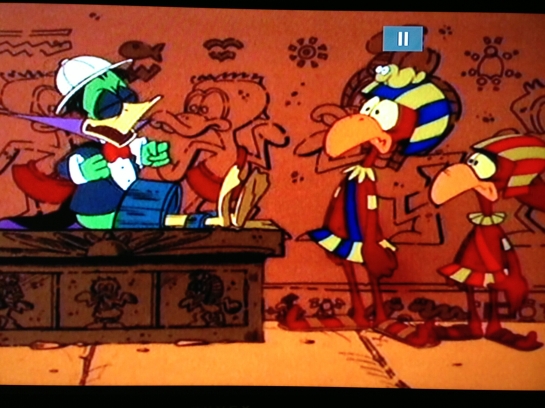 Hoomite and Yubi say they are going to sacrifice the Count to Ra, and after enough human sacrifice Pharaoh Upshi will rise. Wait, Duckula isn’t human. Well, close enough. Who, Ra? And Upshi rises. They start singing Hoorah and up she rises, and I feel like Lois. I can’t take any more schtick. Luckily, Nanny arrives and is mistaken for Upshi. They start with the we’re not worthy bowing, as Nanny asks “who might you be?” The servants repeat over and over, “He knows us! He knows us!” Nanny can see Henosus, but who might you be? Duckula echoes my thoughts, and says he can’t go through all that again, grabs Nanny and flees. Praise Ra! 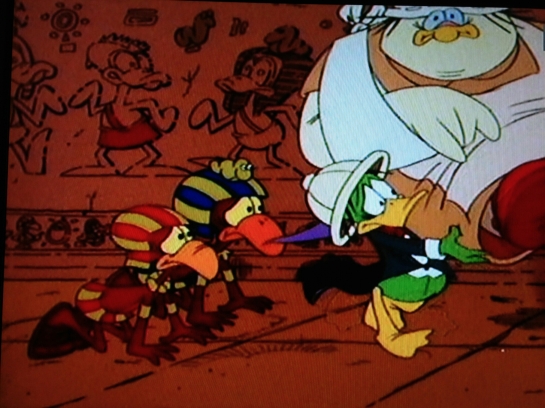 Reuniting with Igor, they continue their search. They find a mummy, and Nanny says he must have fallen off his camel. They tell her it’s a mummy, and she says SHE must have fallen off her camel. Oh, Nanny. She sees a vase, and wants to take it home. Duckula is afraid she’ll drop it, which she does. Lo and behold, they find the mystic sax. Igor says a single blow, and they’ll be the servants of the emperor of evil. That must be a hell of a good blow. The Count butchers it horribly, but finds his groove, and wakes the dead. Time for an Egyptian-Transylvanian dance party! 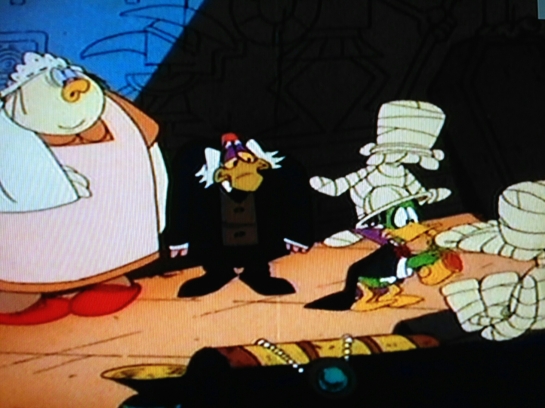 Igor tells Duckula it’s time to go home, but he doesn’t want to end the party. The bat clock strikes midnight, and the castle returns to Transylvania. They still never explain this phenomena. Near as I can tell, the castle travels in space, but not time, and at twelve, it returns with or without it’s passengers. Duckula, Igor and Nanny get left behind, and are seen standing in the desert sun, trying to hitch a ride home. Alright, um, vampire duck standing in the sun. Opening credits say sunlight kills. I assume because he was revived not from blood, but ketchup, he’s not limited to traditional vampire lore, and is a day walker. Maybe they covered it in Danger Mouse, before they spun him off. Anyway, I’ll leave you to ponder that. Until next time! 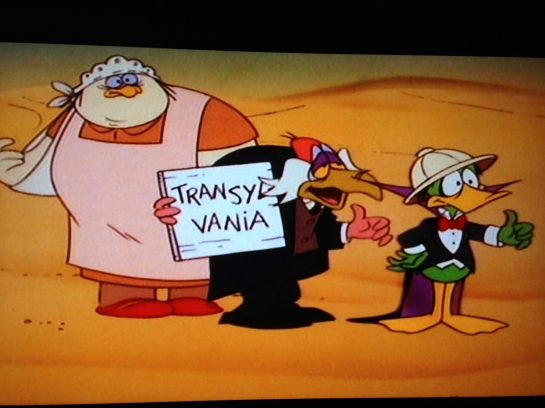