Yes, that’s the actual title of his first episode. This one is gonna write itself. We open on Heathcliff caterwauling on a fence. The old man that he lives with, Grandpa Nutmeg, looks out the window, shakes his head, and closes it. Heathcliff has an audience of several cats, including his leading lady, Sonja. That is, of course, until something draws their attention. Whatever could it be? Let’s find out.

There’s a poster for the great Pussini, and it has all the cats, including Sonja, ready to swoon. Heathcliff shreds the poster, as Wordsworth, Hector, and Mongo, on loan from Riff Raff, oh wait, we don’t know who Riff Raff is yet. He’s the tan cat in the opening credits. Anyhow, the trio come up and mock Heathcliff’s singing abilities. Teaching children the best way to handle someone who criticizes you, Heathcliff unsheathes his claws, and shows them who’s boss. That’s right kids, if someone doesn’t like the way you do something, kick their ass. It’ll establish dominance, and people like that.

A limo pulls up to the theater, and Pussini gets out. Category is, Ringmaster Realness. Let’s take a moment to appreciate this. Cat gets out of a limo fully dressed, to screaming cat fans holding signs. I mention this because we’ve established there are people in this world, and for all intents and purposes, these are normal cats that just talk to one another. However, there is no human handler for Pussini, or any of the others for the rest of the episode. Yes, that’s where I draw the line for my suspension of disbelief. Where were we?

Oh yes, Sonja is swooning, and ready to do whatever the celebrity cat wants. He takes her into the limo, and they drive off. Um, where were the stranger danger lessons in the 80’s? I get these are cats, but- Wait, I remember now. Butters’ dad said it’s ok as long as it’s a limousine. You go Sonja. Go get your naughty on. Kidding. This is a kids show. They do classic things, like a boat ride, with an umbrella to keep out the sun. Yes, really. 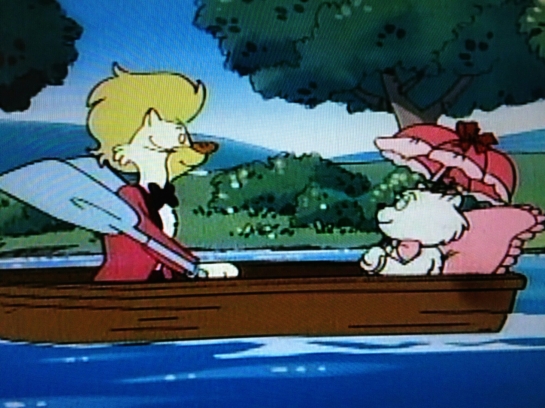 Not giving up without a fight, and having made the other three his bitches, Heathcliff takes his newfound minions to try and get Sonja back. His attempts are met with a Wile-like level of failure. He snags the wrong boat. His dynamite backfires. The minions jump into a boat of humans at the tunnel of love. Yes, the humans are still around, yet oddly, it is a cat limo driver that drops Sonja off so Pussini can go rehearse. Just go with it, it’s easier if you just go with it.

Cut to the night of the concert. Since the star is a cat, there’s no security. Heathcliff and the others get backstage with no problem. We see Pussini sans his mane, and getting cinched into his corset. Yes, the cat is in a corset. Stranger things have happened. The real question is, is Pussini Bianca Del Rio’s cat, or Adore’s? Based on what’s about to go down, I’d say he doesn’t belong to Adore. Maybe Gia. 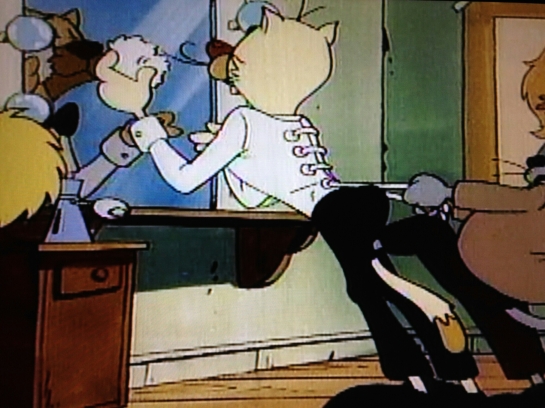 On the main stage, Pussini is singing his heart out. Sonja looks on from the box, and can’t wait until after the show. Heathcliff, serving up shrubbery couture, sneaks up on Pussini, and cuts him out of the corset. Like a true performer, Pussini keeps right on singing. Ru told him not to f*ck it up. Pulling his next shady cat move, Heathcliff works on snatching the diva’s wig. Once that’s been done, it’s time for the giant fan. As Pussini gets blown away, we see that he has indeed been lip synching for his life. Debbie Reynolds has been singing offstage for Pussini. Girl, you know it’s true. Side note, I hope you appreciate these great references, they’re wasted on today’s youth. 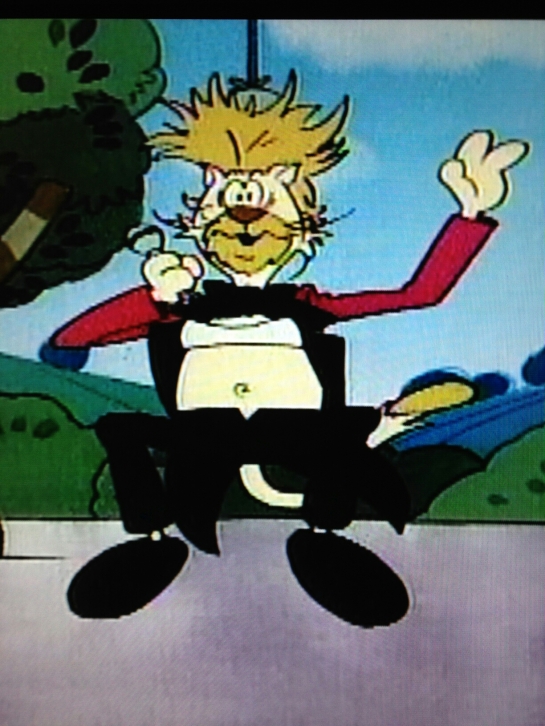 Having created a she-mergency, Heathcliff steps in to finish the performance, and like any all-star, he’ll do it live! The audience applauds and throws bouquets of flowers. That’s what it’s all about. You go Heathcliff! Seeing Sonja had left, he runs outside to see her leaving in the limo, with the real voice behind Pussini. We see them snuggling together, as Heathcliff quips “there’s no accounting for taste”. You’ve got that right. Your gal is kind of a, what’s the word I’m looking for? Slut? No. Whore? No. Friendly port? That’s the one! Thanks, Ma.