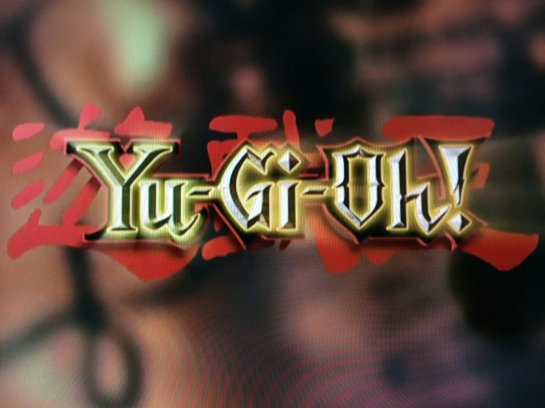 Long ago when the pyramids were still young, Egyptian Kings played a game of great and terrible power. These “shadow games” erupted into a war that threatened to destroy the entire world, until a brave and powerful pharaoh locked the magic away; Imprisoning it within the mystical millennium items. Now, 5000 years later, a boy named Yugi unlocks the secret of the millennium puzzle. He is infused with ancient magical energy, and is destined to defend the world from the return of the shadow games, just as the brave pharaoh did 5000 years ago. How’s that for series opening voiceover? Damn it’s good. I love this show, despite being nowhere near the actual gameplay until the Battle City arc. Though my own dueling decks may have a little dust on them, my fondness for the cartoon hasn’t faded.

I presume they’re in Domino City. I don’t think it’s ever stated outright that I can recall. For my posts’ sake I’ll say they are. Domino high school. Yugi is teaching Joey how to play Duel Monsters. Tristan harasses Joey’s ability to think. Teá says that Yugi is like an expert. She explains the basics to Tristan, and us as the audience. Bakura is standing and watching as well, but isn’t identified by name, or even speaks. Joey makes a move, but Yugi makes a better one. We see Kaiba sitting there reading a book. He’s too cool to be bothered with such nonsense. That is of course until he hears Yugi mention his grandpa owns a game shop, and has a super rare card. Anyone familiar with my postings knows that I’m usually on the side of the villain, this series will be no exception. I adore Kaiba, and may even write up a Character Crush for him. Oops, as River Song would say, Spoilers.

At the game shop, Yugi arrives with Joey, Tristan, and Teá in tow. He asks his grandpa to show them his rare card. They all beg, and he says they’re in for a treat. He doesn’t whip it out for just anyone. Well, he is old. Anyhow, he opens a box to reveal a blue eyes white dragon card. So rare, so powerful, it never leaves his hands. Until Tristan takes it for a closer look. Grandpa says it’s priceless, there are only four in the whole world. Joey says he’s ready to trade. No, not for the dragon, in general. 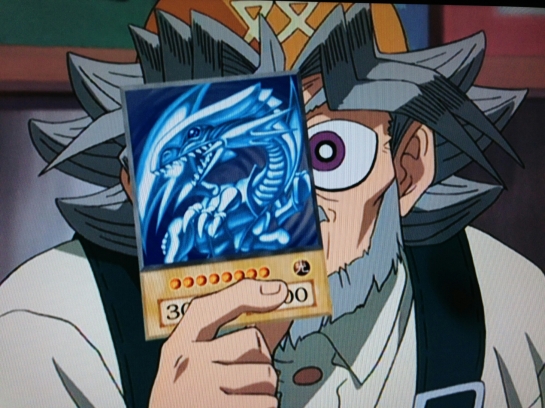 The door opens and in walks Kaiba. Despite having a company to run, he wants to see the card. Well, he is still a teenager after all. Joey says they should all play sometime. Kaiba would have more of a challenge playing solitaire. He’s the top-ranked duelist in the country.
Kaiba spots the blue eyes, and offers an entire briefcase of cards for it. Even any amount of money he could think of. No dice. Even if it were a common card gramps wouldn’t trade it. It is a treasured gift from a friend. Kaiba storms out of the shop calling him a senile old fool. Girl isn’t used to hearing the word no.

At Kaiba Corp HQ Seto tells his men he needs them to get something from the game shop. They go the store and challenge gramps to duel Kaiba. Figuring that he’ll teach Kaiba some respect, and not really having the option to say no, gramps accepts. Yugi and gang arrive after school to an empty shop. The phone rings, and it’s Kaiba telling Yugi to come pick up his grandfather. They rush to Kaiba’s office, and find him on the floor. Gramps says he failed in teaching Kaiba respect for the heart of the cards. Joey calls Kaiba sleaze, but Kaiba said they only had a duel, each putting up their rarest card as the prize. Dueling against a champion like him must have been too stimulating, but fair is fair. Kaiba produces the blue eyes, and proceeds to rip it in half. Now it can never be used against him. I call bullshit. Kaiba wants power, and strong cards, at the very least, he’d have held onto that rather than destroy it. It’s episode one, but down the line, we see he has a great deal of reverence for those dragons. Well, maybe just his own.

Gramps is upset that his treasured card was ripped. He gives his cards to Yugi, and tells him to teach Kaiba the lesson he failed to. Joey says they’ll take care of his grandpa while he takes care of Kaiba. After all, Yugi is the best player he knows, plus he has the millennium puzzle. Teá produces a sharpie, and marks their hands with a smiley face, as a symbol of friendship. They take gramps to an ambulance, but Joey stays behind to cheer for Yugi.

Kaiba and Yugi are in his special arena. Yugi says playtime is over. His puzzle glows, and we see him surrounded by light. Yugi is now taller, his hair, voice, and demeanor changed. Kaiba reacts like he can see it, but the early episodes have never been 100% clear if the change from Yugi to the Pharaoh is strictly for us as the audience, or if the in universe people can see it too. It’s an issue for later. It’s time to duel!

The duel starts with Kaiba summoning a monster. When his card is played, a holographic image appears in front of them. “Yugi” deduces that this is how Kaiba overwhelmed his grandpa. Yugi plays his own card as Joey, and Kaiba’s brother Mokuba, arrive to watch. Kaiba loses the first clash, but on his next turn he summons and powers up his dark clown, and uses it to attack Yugi. Yugi draws a random chained leg. Not helpful. Yugi loses monster after monster to Saggi the dark clown. Kaiba taunts that he’s not faring much better than the old man. Yugi believes is his cards, and is rewarded with Gaia the fierce knight. With the clown vanquished, Kaiba pulls out all the stops and summons a blue eyes white dragon. Wait, wasn’t that torn up? Double wait, gramps wasn’t the only one in the world who had one? The dragon, like so many before it, makes short work of the knight.

Monster after monster are fed to the dragon. Feeling cocky, Kaiba plays his second blue eyes. Now dealing with two dragons, Yugi needs a miracle. Swords of revealing light! Kaiba’s dragons are stopped for three turns. Yugi isn’t about to give up. If only he knew what to do with the two legs and an arm that he’s holding. We hear gramps reminding him that the cards can be like a puzzle, and if all the pieces are put in their place… Yugi then remembers about the time grandpa told him about the only unstoppable monster in the game, Exodia; who can only be summoned if all five cards are assembled, a feat which has never been done. Doubtful, but we’ll go with that. Yugi summons the dark magician to defend. 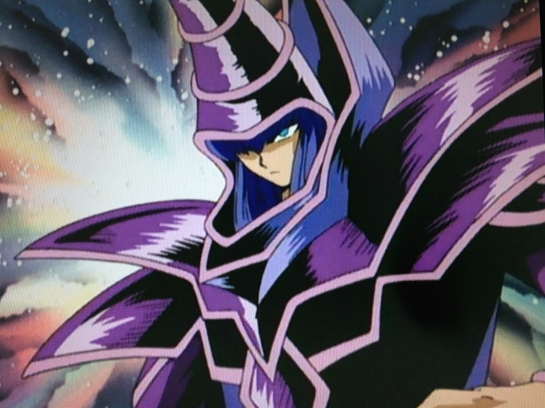 However, his efforts are for nothing. Kaiba summons the third blue eyes. See what I was saying earlier about power, and dragon loving? I don’t buy his reason for destroying the fourth. I’d have believed if he’d said it was because you can have more than three of the same card in your deck, but he still could have kept it and not used it. Seriously, if he wanted to be the only owner of a blue eyes in the whole world, you don’t destroy one. Anyhow, the dragon takes out the dark magician. Kaiba tells him that next item all three of his dragons can attack. Yugi will lose no matter what card he draws.

Yugi starts to doubt himself, and the cards sense it. When he goes to draw a card, he feels like the cards are out of reach. He remembers the friendship smiley, and hears his friends encouraging him to believe in himself. Kaiba tells him to draw his last pathetic card. Grandpa’s deck has no pathetic cards, but it does have Exodia. Riddle me this, Kaiba. What’s the only thing more powerful than three blue eyes white dragons? The answer is Exodia! Alright it’s not a riddle. Just like the symbol he’s summoned from isn’t a pentagram. Stupid US tv edits. Kids don’t know or care about such things. It’s just a cartoon to them. I didn’t get the booby trap joke in Roger Rabbit for years. Sorry, edits done to original works in the name of protecting children irritates me. Kids can handle more than they’re given credit for. Anyhow, Exodia obliterates the dragons, and Yugi wins the duel.

Kaiba is in shock. Mokuba is in shock. His brother never loses. Kaiba doesn’t understand how he could lose to Yugi. Yugi tells Kaiba that he only plays for power. If he really wants to understand, he needs to open his mind, maybe then he’ll begin to see. A symbol appears on his forehead, he makes a dramatic gesture, and we see a picture of Kaiba crack. The effects of which are seen later. 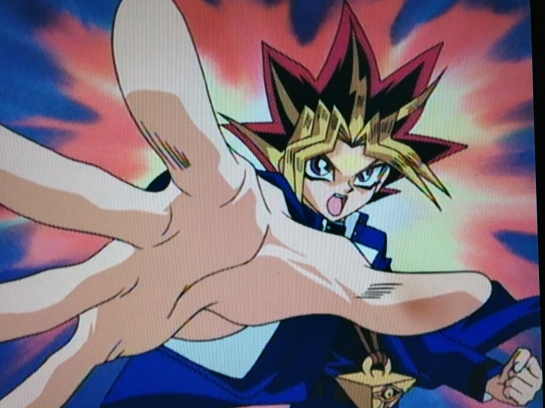 Elsewhere, Mr. Pegasus has just been informed that their undefeated champion, Seto Kaiba, was beaten by a boy named Yugi. Pegasus’ golden eye briefly sparkles. I should also note that the censor/editors didn’t care that he’s drinking wine. Until next time. Goodnight everybody!