To kick off Pride month, as well as celebrate the finale of RPDR Season 7, I’m counting down the videos from each season, featuring the top three. They all deserve a chance in the Gay Geek Gab spotlight. Videos will be ranked based on song, visuals, and Ru appeal. Let’s get to the countdown.

7 – Champion
One dream, the will to fight… Great opening line, and overall great song. However, the Grecian goddess vibe just didn’t do it for me. Ru looked flawless as always. Raja, Manila, and Alexis were on point, even with the latter’s big-ass hair. Playing Olympians was a fun addition, and fit with the champion theme. The pit crew were used as the lovely pieces of eye candy they are, but the overall video just didn’t get me as excited as other RuPaul videos have.

6 – Jealous of my Boogie
Hey, DJ, love the way, I lose my inhibitions when you spin… This 80’s themed slap fest opens with Tyra, Raven, and Jujubee confronting RuPaul and getting their asses handed to them, Dynasty style. There’s big hair, shoulder pads, aquanet, the works. As if that weren’t enough we get to see Ru in each of her runway looks throughout the season, singing and dancing to the song. Meanwhile, the top three are having various cat fights throughout. The campy/soapy goodness is a guilty pleasure.

5 – Born Naked
Who you waiting for? Another savior…? The second video on the list to feature 80’s eleganza. I like this one a lot. Ru is dancing and having a great time with her lip sync. Violet, Pearl, and Ginger are mannequins that come to life, and start dancing as well. We get 80’s camcorder font realness, which compliments Ru’s 80’s outfit for the colorized fashion montage. We get Hello Ginger, Death becomes Violet, Ugly Waters dress Pearl, Headpiece Hello Kitty Violet, Shakesqueer Ginger, Madonna Pearl, Marilyn Pearl, Fashion week Violet, and Snatch Game Adele, Ginger. As if all that fabulousness weren’t enough, we get to see the pit crew. Category is, censor bar couture. The icing on the cake? Pearl Smash! Don’t make me sickening. You wouldn’t like me when I’m sickening.

4 – The Beginning
This is the beginning of the record you like… We open with Jinkx, Alaska, and Roxxxy being brought before Judge Rudy. The video splits into two narratives. One is the court scenes, which are hilarious. We get great lines like, “You can’t handle the T!” “Objection! Reading the witness!” And “What is it you can’t face?”. The court story is fairly straightforward. Ru is clearly enjoying playing the judge, several celebrity judges from the season get to be the jury, and the top three get to be witness, defense, and prosecutor. The second narrative makes less sense. The trio are having fun driving, then I assume they crash, and are driving the car up to heaven to meet with goddess Ru. But that’s just my educated guess.

3 – Cover girl (Put the Bass in Your Walk)
Stroll down the runway, another pay day, cover of magazines… This video was shot with the season one filter, and is fairly soft. However, it was the season that started it all. RuPaul is in a catsuit getting her red Cadillac serviced. Giggity. We get Bebe, Nina, and Rebecca, the most normal sounding names of the top three in Drag Race herstory, on a road themed runway. There’s no real story for this video, other than singing, dancing, posing, and Bebe’s verse and that’s all we need. That and a hunky shirtless attendant help sing the chorus. Alright, I lied, there’s also the painfully adorable Lucian Piane playing the gas pump attendant. This video ranks as high as it does because of Lucian. We see an army of them. He dances with a gas pump in hand, and even semi thrusts against it. Put that on a loop. I’m set. Next!

2 – Sissy That Walk
Pick myself up, turn the world on it’s head… There’s no real story for this video either. We have Bianca, Adore, Courtney, and Darienne working this song for all it’s worth. They are all fierce divas, and Ru is just as fierce in this one. We’ve got cat suits, and an actual cat in the form of a literal panther on the runway. Not only do we get to see each of the top four in their own solo actions, there is some fun group choreography as well. That, coupled with the pit crew dressed up, and undressing, only add to the fun. The message of this song speaks to me, personally. If I fly or if I fall, least I can say I did my all. Of the songs on this list, it’s actually my favorite, but the next video is better overall.

1 – Glamazon
Everybody wants her, miss sexy in the city… This is my absolute favorite of all the contestant music videos, obviously. Bianca may be the top of my favorite queen’s list, but before her season, it was Sharon Needles. Hers was the only meet the queens I’d watched that year, and that was it. I wanted her to win from that moment on, and she did. For this video, Sharon, Chad and Phi Phi and enlarged in a non-sexual, still tucked, kinda way. They stomp their way all over the world. They take out their fellow queens from the season, as well as all the guest judges. The whole thing is themed like an old school video game, and they get points for each person they destroy. After taking out the last judge, an even larger Rupaul shows up and stomps the three of them at once. 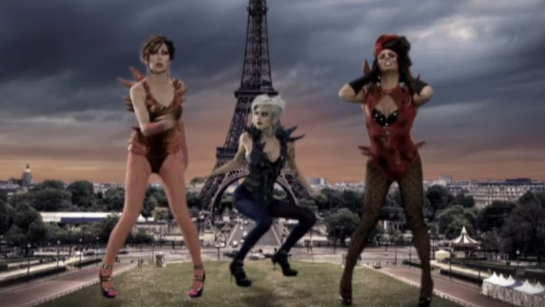 I hope whatever queen you supported won. We at Gay Geek Gab support all three. #TeamViolet #TeamPearl #TeamGinger

Just for fun, here’s a bonus Lucian for your enjoyment. Happy Pride month everyone!