Good day to you readers! What a wonderful holiday weekend it was. My mate and I made an excursion to Pinball Kingdomz, which is exactly what you would expect. A castle filled with pinball machines, old arcade games, ticket games, and craft beer. It was Bevianna heaven. After a day of playing the pins and drinking delicious beers, I was inspired to discuss pins here on the blog. Joshie and I have been discussing introducing a new recurring segment, Top Five Tuesdays, so what better way to start it off than to count down my top five favorite pinball machines of all time. Again, these are simply my personal favorites, not the top five in terms of revenue or general consensus. 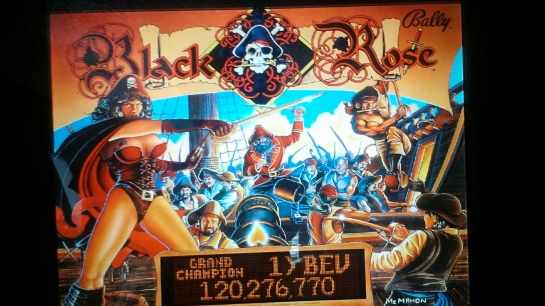 Shiver me timbers!! Black Rose is a swashbuckling themed table of beauty manufacturered by Bally-Williams in 1992. It was unique for having a cannon in the center of the lower playing field, and upon lighting broadside, you launched the pinball to sink the ship. Also, Black Rose had 2 mulitball modes and multiple video modes. 3746 of these tables were made, and I currently have the grand champion score on my home machine.

Scared Stiff is the second Elvira licensed pinball machine, and was by Bally-Midway in 1996. The first was Elvira and the Party Monsters in 1989. While both are great machines, Scared Stiff has the better gameplay and the better naughty Elvira quotes. “Now there’s a scary stiff”, “Who oesn’t love a little head”. Set in the realm of midnight horror bad movies, the premise is to light all 6 scary tales to activate the stiffometer and get scared stiff. The unique animated backglass of the spinning spider wheel adds an interesting element to activate bonuses when the ball is dropped in the spider hole when activated. This machine has 2 multiball modes, and the unusal ability to play bonus modes simultaneously when activated to really rack up the points. Bally made 4028 of these machines, and is currently fetching upwards of 20k in the collector market. 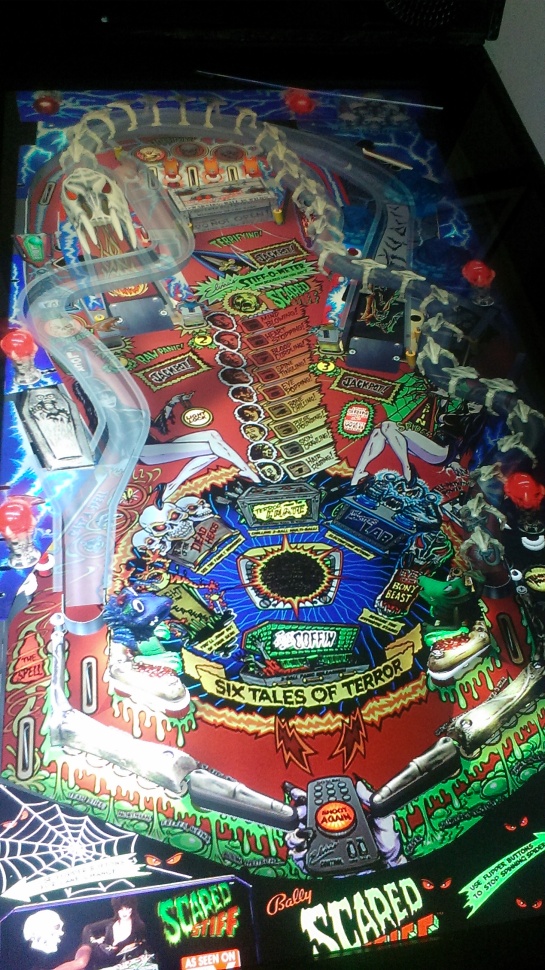 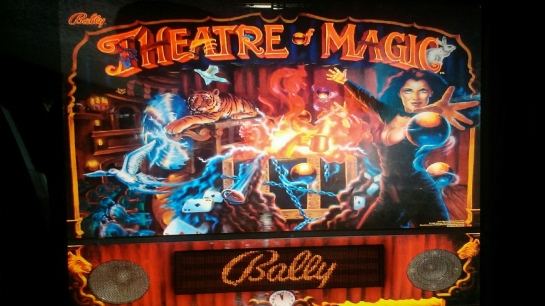 Released in 1995 by Bally-Midway, this table was instantly one of my favorites the first time I put my 50 cents in and heard the voice say, “Welcome to the Theater of Magic! Shoot for the magic trunk!” The goal of the table is to light all of the magic shows and work your way up through magician apprenticeship to unlock the grand finale. Several different playfield oddities are on this table, such as the hidden basement, levitating balls, and a mirror that extends the playfield. Multiball was an easy unlock on this table. Bally made 6600 of these machines, and there is a supposed Easter egg, that if you hold down start and a flipper at some point in the game, vs codes for MK3 are shown, however, having never done this myself, I cannot confirm.

Another great Bally table released in 1997, this table featured a renaissance theme and Monty Pythonesque humor. Tina Fey even did some of the voices. The purpose of the game is to destroy the 6 castles of various roalty types, working your way through the kingdom to ultimately destroy the Reign of Payne. King Payne that is. Along the way, there are plenty of humorus modes to activate; peasant revolt, save the princess, catapult shots, and trolls to destroy. 3 multiball modes and a playfield castle that you actually get to destroy, make this a must play machine for any pinball or Monty Python lover. Bally produced 4016 of these machines, and it remains one of the most sought after by collectors, fetching nearly 15-20k dollars a machine.

My personal favorite, is different than many other people’s. Most pinball junkies will tell you that Addams Family or Twilight Zone, or even Terminator 2 are their favorite machine, but mine hands down is Twister. One of the last machines that Sega produced before getting out of the pinball business, it’s easily one of their best. This was a licensed table, based off the movie, so gameplay basically was driven around chasing the storms and unleashing Dorthy. This table has an impressive 4 ball multiball, and 4 different multiball modes. Filled with dialogue and music from the film, no one can imagine the pleasure of starting Chase Multiball and hearing the game tell you “We got cows!!” Oh it’s pure pinball greatness. And to add to the multiball madness, there is a spinning twisted disc in the center of the table that flings the balls throughout the playfield. The backglass even has a fan that blows “wind” on you to get you further in the mood.  While this is not a well known machine, or highly sought after by collectors, it’s multiball mayhem will always hold it the most special place in my heart.

All images in this article were taken from my virtual pinball cabinet that I built for use in my home. The cover image was taken at Pinball Kingdomz in Buda, TX.