Video games used to be so simple, yet so challenging and engaging. You competed against others for honor of top score or reaching kill screens.  There were no bosses, no real “end” to most games, as you completed all the boards, most games simply looped and became increasingly difficult. The pursuit of high scores as major achievements is something that has been missed in the new generation of gamers. It started back in the NES days, when finding all of the warp zones in Mario, finishing out Link’s quest, and not trying to shoot the duck hunt dog became more important. Arcade games soon followed suit with the same format; side scrolling beat-em ups with backstories and plotlines.  While some of the games born of that format are on my list of faves, and topics of discussion for another day, today we are going to harken back to the glory days of old. A time before that. A time when they have digital games about serving beers. Yes, before the ever popular iBeer, we had to entertain our digital beer needs with the coin-op machine Tapper.

Tapper was released by Bally Midway in 1983. Sound familiar. This company had stakes in both major coin operated entertainment industries during this time. They marketed video games under the Midway trademark, and marketed their pinball division under the Bally trademark. They got to have their cake and eat it too up until the mid 90s when they closed their pinball division, amid waining popularity due to the uprising of such major video game franchises such as NBA JAM and Mortal Kombat. Both produced by Midway, nonetheless…can we get some useless information?

The premise of the game was simple. You, the player, took the role of Bartender and accepted the challenge of serving “delicious” Budweiser (officially licensed btw) beer to thirsty patrons in 1 of 4 bar settings, depending on the level. Western bar, Sports outing bar, rock bar, space bar. Because aliens get thirsty for their Bud too. The bars were laid out with 4 taps and thirsty patrons marched onward until you served them a frosty brew to keep the teaming hordes of customers at bay. Extremely thirsty guests would throw their empty mugs back at you, grateful ones would leave a tip. Let any parched patron reach the end of the counter sans brew, lose a life. Drop an empty mug, lose a life. Waste a precious, precious glass of frothy goodness, lose a life. After each consecutive level, the number and speed of patrons increases, and amount of time they are subdued (or pushed back rather) is shortened.

Dancin’ girls and all Ya-hoo!

After every few levels, there would be a bonus level. A villain would appear behind the bar and play a shell game with you. He would shake up 5 of the 6 beers and if you managed to pick the one he did not shake, you would get bonus points. Otherwise, you’d get sprayed in the face, no points, and gain an understanding of what 8-bit pornography would have looked like. 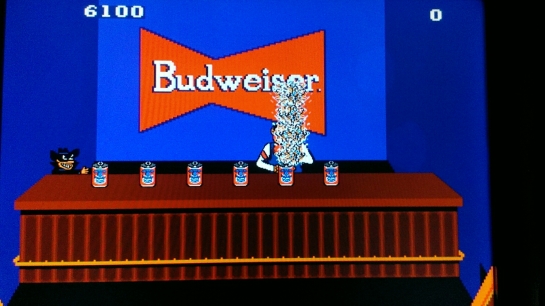 The hamburgler was young, and needed the money…

That’s it that’s the game, it was thirteen boards, and if you were good enough to pass them, they just cycled back through with increasing difficulty. It is recommended that while this game is licensed by Budweiser, and basically a giant advertisement to use it’s product, don’t. Think of the children. As exactly was the argument from consumers as Midway faced one of the first of many censorship battles in the name of the children. Thus, 1984 brought us both Root Beer Tapper and Soda Pop Tapper. The Budweiser logos all recoded as Mountain Dew and root beer advertisements. Aside from these changes to each board and the cabinet art, the game itself remained unchanged.

Tapper has withstood the test of time, and remained relevant throughout the history of gaming. Home versions were released for Atari, ColecoVision, and Comadore 64. A modern revamping of the game, Tapper World Tour was released for PC, Android, iOS and XBox Live Arcade.  Tapper also was featured in Wreck-it-Ralph, as the bar all the characters go to after the arcade closes. And now, with the closing of this article, it’s time to tap a few myself. Until next time, game on.