These were days of peace and prosperity on Third Earth. When one empire stood above all others. Ruling with a just heart and a razor claw. And though omens foretold in the book would be ignored, the tragedy to come was necessary. For it was written that he would be born of fire. A King to lead his people to victory, against ancient spirits of evil. Damn, Jaga, that is some good series set up. Not as catchy as Thundercsts are on the move. Thundercsts are loose, but I’ll take it. I love all things Thundercats, and this reboot is no exception. I love the voice acting, the plot, and the gorgeous animation. Let the geeks begin!

I can’t pretend we don’t already know these characters on sight, so I’m not gonna. Snarf, and a hooded Lion-O are walking through the bad part of town. It’s worth mentioning that in this version, Snarf isn’t anthropomorphic; he’s just a regular cat. It makes him oodles cuter. We see a canine thrown into a stand, with a hulking looking merchant cat threatening him. Lion-O says even though he’s a dog, no one should be treated that way. The threatening cat turns his sights on Lion-O, who makes short work of him and his crew. Snarf, bring a normal kitty, runs between the legs of one of them, and makes him fall. Two minutes in and he’s already being useful. The merchant grabs Lion-O from behind, and has him in a sleeper hold. That is, of course, until he’s rescued by Cheetara. She points out that the king’s son shouldn’t be playing with ally cats. Revealed as the prince, the merchant cat and crew flee from Lion-O. Cheetara wants to know why he’s in the slums. It depends on if she can keep a secret or not.

Kitty Castle, throne room. King Claudus is complaining that Lion-O is neglecting his princely duties. Why can’t he be more like Tygra? Tyrga tells his father that’s impossible. Father? How did a lion make a tiger? At the very least he should be called Lygra. Back in the slums, Lion-O takes Cheetara to a friend of his that deals in collectibles, er, black market items. Lion-O says it’s what’s outside Thundera’s walls, it’s what the Book of Omens called, technology. He hands her a Berbil arm, as she calls it fairy tales. The merchant shows him a piece of tech. Lion-O says as cubs they heard tales of ships that could sail through the sky. He never bothered to outgrow them. A bell tolls, and Lion-O splits after paying the merchant.

Tygra looks bored as they wait for Lion-O, who comes running in, apologizing. Claudus tells Jaga to begin the rite of passage. The clerics are ordered to bring in the Sword of Omens. Tygra winks as the one holding it, who has very familiar eyes. Jaga explains that though he’ll one day wear the crown, the Eye of Thundera will be able to see if there is a King inside of him. Lion-O takes the sword as Claudus tells him that it’s what allowed the Thundercats to build their empire. He says he’ll show Lion-O what it’s capable of in the right hands. Tygra tosses him a sword, and Claudus goes after Lion-O with the Sword of Omens. As they clash, Claudus gives us a history lesson. “The book told that it was the Thundercats, our ancestors who first defeated Mumm-Ra. It was the Thundercats who brought law and order to a world of warring animals. It is now the Thundercats who are strong enough to maintain this fragile peace.” Now, I don’t know if he’s setting up the history for this universe, or if his history lesson is in reference to the prior series. Not wanting to make the heads of the modern kids hurt, I’m sure they pretend the original series didn’t exist. However, they cast the original voice of 80’s Lion-O to play Claudus. A small nod for fanboys like me.

Claudus punctuates his story by driving the sword into the ground, as it crackles with electricity. Lion-O takes it, and begins to swing. Lightning builds along the blade as he continues. He touches the sword to the Thundercat symbol on the ground, and holds it in front of his face. Sight beyond site shows him two red glowing eyes. Spoiler alert- they’re Mumm-Ra’s. Lion-O stops, and when Claudus asks why, he says he saw something. Jaga asks what it was. Not wanting to share, Lion-O decides to point out two girls in the courtyard. Meow! Claudus tells him the sword is ready, but he is not. 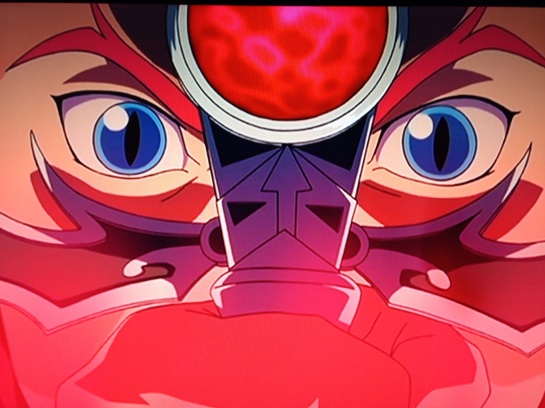 Later that day, it’s announced that something is approaching the walls to the city. Claudus looks, and is pleased. It appears to be a massive crystal that looks like the corruption in Darksiders II, and Diablo III. As Claudus and sons ride out to meet it, we see that it is being pulled by lizards in chains, as a sabertooth with one fang rides atop it. Um, Slavery is bad, mm kay? Anyhow, Tygra is happy to see Grune, as is Claudus. Anything that big has to be a trap, but I only know this because I’ve seen cartoons before. Claudus asks where Panthro is. Grune says that it’s because of Panthro’s sacrifice that he’s even there, and gives his nunchucks to Claudus. Tomorrow they will mourn, but today they will celebrate.

That night, Claudus tells his people of the treasures Grune discovered, and new lands they can conquer. The Trojan stone sits in the middle of the square. We pan through the festivities, and meet Wily Kit, and Wily Kat. She offers to play a man a song for money. He refuses, but once she starts playing, he’s hypnotized by the melody. Meanwhile, Kat picks his satchel for change. She stops playing, and the spell is broken. Elsewhere, cats are throwing fruit at two lizards in the stocks. Lion-O tells them to stop. The lizards beg for mercy. They only stole to feed their families. The one lizard says trying to get mercy from a cat is like trying to get water from a stone. Methinks Claudus isn’t the leader he’s made out to be. The cats have the best land and resources. The other species only get scraps. Tyrga approaches, and calls the lizard a criminal. He mutters that the lizard’s only crime is being weaker than the cats. I smell a revolution. 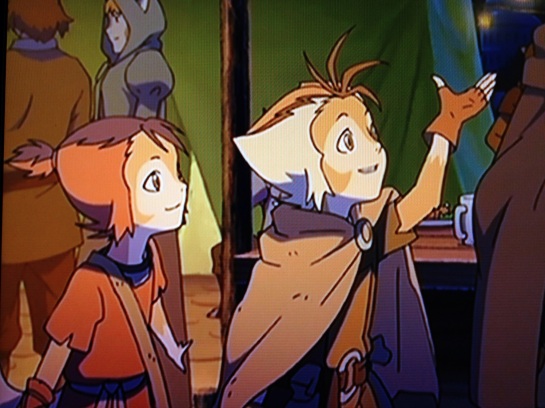 Tygra takes Lion-O back to the castle. It’s time for the games. Claudus dedicates them to Panthro. We see some large, intertwined branches above a pool. Two cats compete to get to the top first and ring the bell. Hitting, kicking, clawing, are all legal. In the royal box, Lion-O asks Grune if he saw any technology on his journey. Grune tells Claudus nothing has changed; one son with his head on his shoulders, the other, up in the clouds. He tells Lion-O he saw all sorts of things, but not technology. Tyrga says technology is a myth, like Mumm-Ra. Grune says he’d have made a great king, but the honor is reserved for the bloodline. Tygra’s adopted. It all makes sense now. The rivalry flared, Grune says they should settle it in the games. Both claw and climb to reach the top. Aside from the crown, Lion-O will always be in second place. Tygra kicks Lion-O down to the pool, and rings the bell.

Later, Lion-O says they all think he’s a fool. Grune said there’s no tech, so he’s just chasing a childish dream. Jaga approaches, and says their greatest king will have the gift of sight beyond sight. Sight is useless without action. Lion-O wants to confess about the mini vision he saw. Jaga says there’s time later, and to go enjoy the party. In the city, Kit & Kat rush home with food and scarf it down. Kat tells his sister that he’ll find the map to the city of treasure, and then they won’t want for anything. Elsewhere, a crowd has gathered around the stockade. Cats are waving torches in the lizard’s faces. Lion-O sees it, and wants it to stop. Tygra says the lizards are their greatest enemy. Maybe they don’t have to be. Lion-O tells the crowd that the lizards don’t deserve this. The crowd says they deserve death. One takes a swing at Lion-O, and Tygra steps up. Cheetara runs through the crowd, and ups the odds. The crowd, knowing full well that two of the three are royalty, attack. This cat society is seriously messed up.

Tygra breaks out his whip, and does the now you see me, now you don’t, schtick. He must be announcing that for the radio audience, as there’s really no need to announce to the people you’re fighting, that they can’t see you. It’s not like he’s John Cena. Cheetara, Tygra, and Lion-O whoop on the crowd, until Claudus steps in. He can’t believe Lion-O is protecting lizards. No, he’s protecting themselves from becoming the cold blooded creatures they fear. The cats fear the lizards? Not good. Lion-O asks for their release. Claudus says no. Lion-O says he’s thinking like a King, and there are ways to rule beyond the sword. They wouldn’t have lizard problems if they’d stop repressing them. Claudus has the lizards released as an act of good will between the species. I’m thinking too little, too late.

Lion-O watches as the lizards leave the city. Cheetara says she was right, and there is something different about him. Back in the square, kitty-cat Snarf is making faces at one of the crystals in the Trojan corruption stone. Snarf walks away, and we see a reptilian shadow in the crystal. Credits

Once again a Thundercat premier with no Mumm-Ra, but at least he was mentioned. This series has a darker, more societal tone to it, and I love it. Until next time, stay geeky, and keep gabbing!