Happy Independence Day readers!! It’s a great day to be a ‘murican. Whilst y’all are enjoying your roasted weiners, a radio-cooler full of ‘stones, and blowin’ shit up (all in the name of freedom of course) I’d like to turn your attention to the darker side of the holiday. Yes, in keeping with the spirit of tradition, (my tradition of bringing you a truly terrible b-movie holiday “horror” delight) I bring you, Uncle Sam…I Want You Dead!

When Joshie and I were discussing what we should do to celebrate our fabulous independence, it occurred to me that I didn’t have a fireworks filled patriotic b-movie staple in my repertoire to share with you good people. I debated using Birdemic, and pulling another, “whatever, I do what I want” on you, trying to justify the correlation of birds=eagles=murica. But, I felt like that would be cheating you, and ultimately myself from the true magic of the holiday. Or at least from enjoying a holiday horror flick.  The one thing that rings true for all of these holiday themed gems (not Jem, there are no holograms here) is that they are always so chaulk full of ingenious holiday-horrific deaths and the killer always, always is armed with an array of witty holiday puns. (Exp: Thankskilling-“You just got stuffed!”) Long story short, I set out on the interwebs to find answers. Was there a July 4th themed horror movie? While I’d like to take the easy way out and use Independence Day (the thought of sitting through it a second time was too difficult), I found the object of desire in Uncle Sam. From this one screen shot, I knew I had found the one.

Uncle Sam in a King Vitamin mask licking off a bloody clever? Oh the potential! Thank you, internet, thank you. You have again opened my eyes to something magnificent…or had it?

The plot of Uncle Sam follows the story of Sam, a Master Sargent killed in Kuwait as a result of friendly fire. The movie takes place in his hometown, Twin Rivers.  His adulterous wife is shagging the local sheriff, and upon finding out about his death, she finds it best that they hole up the sarcophagus in her sisters house for some untold reason.  Jody, the brat, obviously disturbed,  finds it best to bring Uncle Sam’s ammo box full of war decorations to class , and thus suffers them through a story about how he died and then the Vietnam draft dodging cowardice teacher tells him how lovely it is, but it was a different time then and he just wouldn’t understand. Jody goes home and is upset that he can’t see his Uncle’s body, but the kindly old creeperphile General tell him that Sam’s suffered a great deal, and that he’s sure that one day, Jody will enlist and become a great war hero too.  Insert two important plot points…one…the general is a creeper and trying to get some bereavementass

And that, secondanly, coffins are not something to play with.

I wasn’t playing…then what were you doing Jody…?!?

All this talk, talk, talk building relationships and entirely not enough killing up to this point might I add. The most frightening thing so far has been Jody’s apparent obedience to the president. 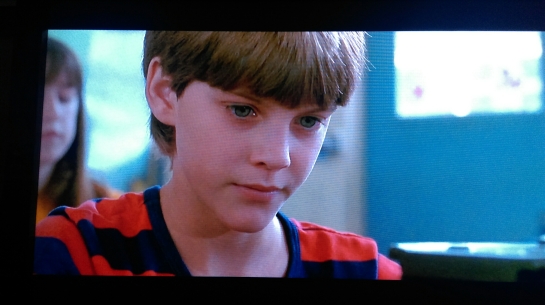 I’ll do what the president says, because he knows best….

Again people…Actual dialogue from this thing. What’s wrong with me. I’m going to bed.

Yep, that’s another one…this kid’s got More zingers than I’ve got useless quips.  But anyway, it’s 45 US minutes into this film, and by golly, we need some deaths already.  Give it another 15 minutes or so, and then we’ll actually get one. You see, it’s all building up to the Fourth of July shindig that’s about to go down…and Sam’s not having it you see.  So many unpatriotic folks in Twin Rivers. Except for good old Jed.  The wise old Negro. 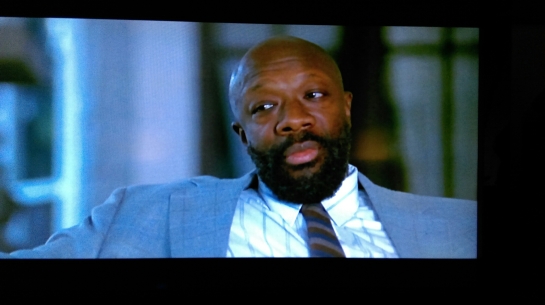 Ya see, Jed was an old sergeant that had his leg, and not to be mistaken, none other parts blown off in a land mine. (Actual dialogue again…this thing makes its own jokes) Anyway, Jed used to tell Sam his old war stories, back when they knew what were and what the why’s and what for’s were. In classic Chef wisdom, Jed convinces Jody that war is not all its cracked up to be.

One zinger too many, and Jody is sent off to bed without supper and falls asleep reading a very murican letter from uncle Sam about how all those unumerican peeps should have their butts kickedfor bein’ unumurican and someshit.

Flash to the youth. The youth are always causing trouble in movies, and leave it to them to be very unumerican indeed. What with their graffitin and flag burnin…Sam just can’t take this shit anymore. His corpse rises from the sarcophagus and steals back his medals from the creepy kid, pins them on his zombichest and seeks out to get amurican on all these unumerican bastards!! Liberty!!!!!

But wait…before we get to any actual killing, still nearly an hour in, let’s get to what’s really
important. The obligatory boobies scene

But it’s really ingenious in this one how it sneaks up on you…they tie it into the first killing. And not in that kill the slut kind of way that most horror flicks do…this one sets it up nicely. The first victim…the creeper dressed like Uncle Sam, is peeping in a window. And well, peepin Tom’s are just unumerican and Sam sets forth to kill the little pervy with some garden sheers. Finally, tits and death in the same 5 minutes, this movie is alright afterall, but more importantly, this is where Sam gets THEE Uncle Sam costume. He even tailors it to fit with the bloody garden sheers.

Time for more killing. Sam just got started and now he’s on a roll. Off to the cemetery to take care of the rest of those flag burnin youth. He takes out the leader of the pack via ocular spray paint; red, white, and blue, of course and then buries him alive on account of a
broken leg. Eagles scracaw!! Let freedom ring!!!

Not assaitiated yet, the next Nazi youth is strung up to hang to death on flag pole. I will give this movie this, as slow as it was to get going, it sure took off in excitement in the last half.  Well, we’ve made it to the 4th of July celebration. The townsfolk are all gathered together to celebrate. But wait, there’s something missing. The hatchet. Of course. But where is it? In the draft dodgin’
teachers’ head of course!

For no apparent reason, or plot arc, we are now introduced to a blind burnside kid in a wheelchair, who’ s family shows up to the festivities. No one can believe it, for this is the dangers of playing with fireworks people.

There are lessons to be learned here. In addition to being maimed, apparently, his freak accident left him with a 6th sense, to where he can speak with resurrected killing machine zombie veterans, and he knows exactly what plan Sam has hatched and how to thwart it, and how Sam will trust him; all this develops later on in the movie…via a single dialogue interchange at a random time, much like most of the character development occurs in this film. I just feel it important to point this out to you now, because its likely I will miss this in the future, as I’ve watched it three times now for the purposes of writing this and just now reflected on this revelation. A’murica!

Now, with that introspection aside, we move on to our next victim. The blonde jock. Making a mockery of national anthem. He even moons the crowd. Uncle Sam’s gonna have his way with him, but not just yet. There are other killings that hold a higher priority.  Like how about the last guest to the bbq, the corrupt senator, starts to try and schoomze the crowd. Sam is ever so upset. He best just kill them all.

Btw, this movie, and it’s killings, are brought to you by Country Time. A’Murica’s lemonade

The lost episode of To Catch A Predator…

A potato sack race later and Blondie Jock is finally about to get hacked.  It was Uncle Sam, in the forest, with the clever. 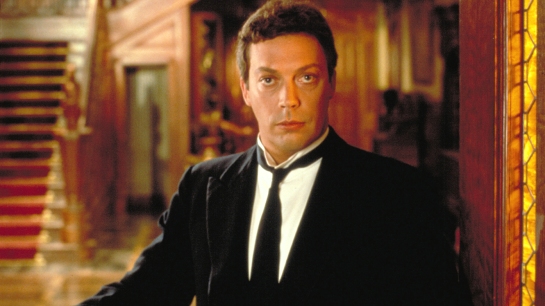 Insert scene of wifey an beau; I’d really like to tell you there’s a plot here, but there’s not. Sister finds Ralph dead…And in case you missed it, there’s a half of second clip of Sam snatching a pellet gun from a shooting gallery. Guess what?!? Honest Abe was shot in the head…how original. That’s probably why no one but the crooked politician seems to give a damn. He see’s this as a golden opportunity to hit it with the voters and show off his new pair of sunglasses. How fucking a’murican can we get? Guess what guy’s…The politician is about to get Sam’d next…And he’s gonna get it in the way I was dreaming about pun filled glory when I first found this piece on Google. That’s right, FIREWORKS.

But before that, let’s have another vaguely crappy scene to elude to some sort of predecessor that was to set the film up that never actually occurred. We get that Sam was bad to his wife and sis…But how bad? Beating bad? Raping bad? We don’t ever really know except it seems that no one really liked the guy, including family, and this is what Wikipedia had to say about it. Although none of this was actually ever discussed in the movie. 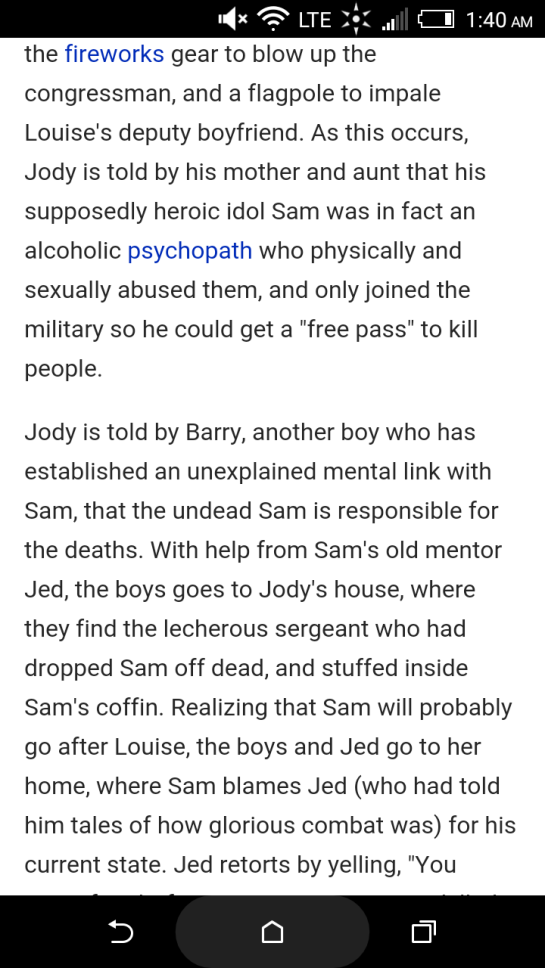 But at least wiki makes some sense for us. 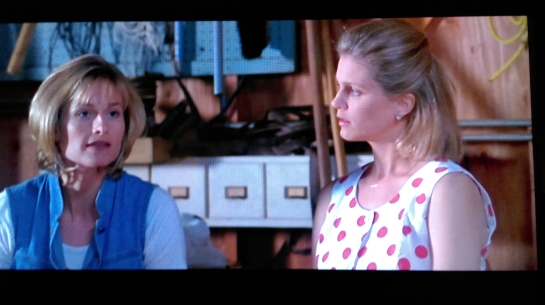 And he did bad things, only the love for denim can replace.

Back to the killing!! And epically. Do you ever feel, like a plastic bag drifting through the wind, waiting to start again?? So do the ashes of the corrupt congressman, and this is finally the event that makes the townsfolk wonder what’s going on. And we get a twofer death, as Sam knocks out the sheriff at the same time. Impaled on Old Glory? How American is that?

The blind kid, the creepy kid, and the wise old negro come up with a plan to stop Sam once and for all…

After a whole lot of introspection, and a couple more non plot related deaths, Chef..err, Jed…decides that since Uncle Sam can’t be killed with bullets, it’s best to use Jody as a distraction to gain his trust, whilst Chef wrangles the town cannon (every town should have one) to the back of his pickup and hauls it off to take out Uncle Sam once and for all. ‘Murica!!

My very favorite part of this film is the cannon balls Twin Rivers is packing. 20% Mortar, 90% Michael Bay, these babies pack an explosive whallop and leave Sam buring in the rubble after only two, countem two Michael Bay cannon balls… 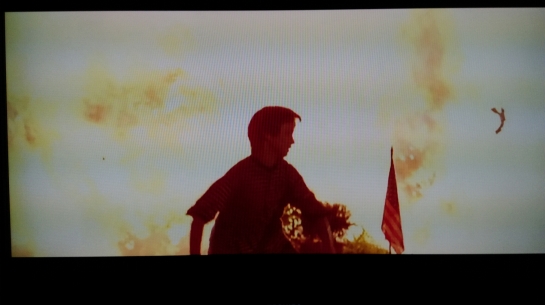 And then the secondly epic cannon ball mortary extravaganza. 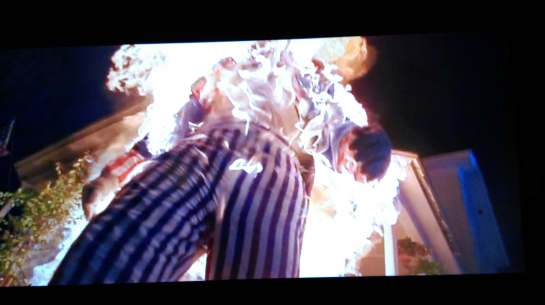 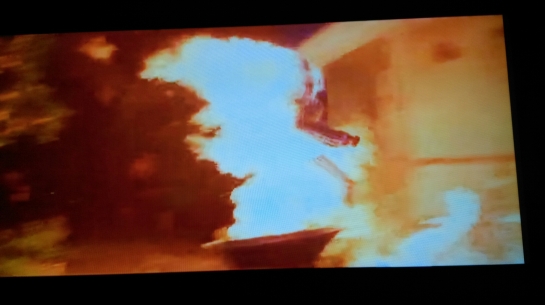 So essentially, the climax of the movie consists of the blind kid, the creepy kid, and the wise old negro blowin shit up on the fourth of July. And here it is that the movie comes truly full circle. A’Murcia.

But seriously, about the ending of the movie tho, super weak. And super unamurican. With what I was waiting for the entire film for an awesome one-liner of “I want you!” We sadly didn’t get. In fact, we didn’t get any at all. In fact, it’s almost safe to say that I made this sound entirely more enjoyable than it actually was. Watch at your own risk. But if you don’t celebrate the fourth with this terrible atrocity, celebrate with a true spirit of independence in your heart, because its often forgot amongst many, but it’s truly a great thing to be an American. And if you don’t believe it, someone at your BBQ is likely to go all Uncle Sam on your ass…