Good evening, afternoon, morning, or whatever it may be to you, readers; today I want to talk to you about something special; today I want to discuss the times that video games have given me the feels. It doesn’t happen often, but when games bring the feels out in a gamer it’s an important event. Inspired by my recent play through of The Last of Us, I thought to myself, “self, this is game is a genuine experience to play.” And then I thought, to myself, “self, the last time you felt this many feels from a video game was when you broke down your brother’s bedroom door to weep, blubberous, sobs into his arms because Sephiroth had just impaled Aerith…” So in the spirit of getting the feels on, I bring you my top five moments games have brought me the feels. Not always the sad feels, mind you, just so long as there was a genuine emotion produced, (other than delight of simply playing) it was enough of a qualifier for the candidate to make it on the list. Here they are, in no particular order…

I challenge anyone to play this masterpiece of a game and not have a single moment of feels. Naughty Dog so splendidly captured the human spirit, they in every way earned all of the accolades and awards this game was bestowed. “Dis is da most human zaambie ting you half evah seen…” Oh wait, that was Arnold talking about his role in Maggie. Nonetheless, this is a great game, and a great experience that tugs on your heart strings in all ways. Suspense, horror, hope, fear, love and loss; this one’s got it all.

I was 16 when Final Fantasy VII came out for the PS1, and when I first played it, it was single handedly the greatest game experience I had ever witnessed. The only things I had ever loved as much up to that point were Final Fantasy Adventure and my dog. (This still holds true in most cases)  As I played through this adventure for the first time, it was on a 5″ B&W television I had hard wired (via much splicing) my PS1 into. Much was lost in the beauty of the game, but it still sucked me in nevertheless. I became fully engrossed in the story and the characters, and then, one sad evening that bastard Sephiroth had to go and slay Aeris. Even though I knew it was coming, it still produced all kinds of feels and my brother was left to pick up the pieces of a weeping Bevianna.

Who let the dogs out?! The first installment was a masterpiece in it’s own right. Albeit, awards for its Oscar-worthy voice acting performances aside. By no means does it live up to games in the current gen consoles (all though, the hd remake of the GameCube remake is a beautiful experience); not only did this first game really pushed the limits of the original PS1, but it was a completely new venture for Capcom, and introduced the world to “survival horror” games.  I had borrowed this game over a long weekend from a friend. My brother and I sat in the basement, playing all day, all night to try and complete it without using a strategy guide. The initial scare that was genuinely dealt out when Jill walks down the hallway for the first time and the Cerebrus jump through the windows will never be matched.  Except of course if they cast original Jill into more voice acting roles.

“What’s this?!”, I say, as I’m browsing the cheepy bin at Gamestop…a “game of the year” for the Wii that doesn’t have Mario on it? Actually made by a third party developer? Why not?! I have to see this to even believe it.  Dead Space: Extraction was the Wii integration of the Dead Space franchise. A space-horror rail shooter. Maybe it was the motion controls, or the notion of being abandoned in a space mine with terrible space creatures…or both…but this game legitimately pulled me into, at often times, an unpleasant sensory experience. All the while, from start to finish, the game never loses sight of the suspense it was intended to put you in. Most deserving of the E3 GOTY award it received, and by far the most horrific experience available on the Wii, aside from trying to play Dance on Broadway with a group of drunken lesbians. 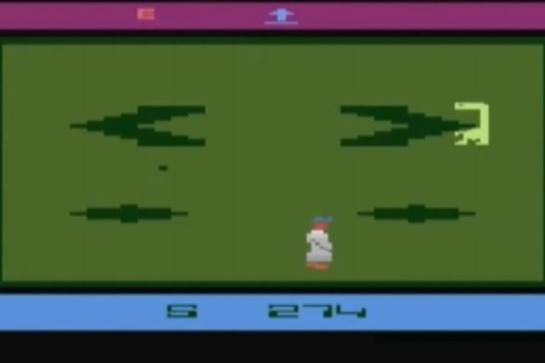 Alright, I’m not just trying to be funny here, but for me and many other gamers out there, this was the first time there was a resounding and accurate sense of “what the fuck?!?” ever created in digital form. And never has there been since. Perhaps, if Atari had thought a wee bit wiser, they could have remarketed the project to the military as a “confusion inducer,” rather than burying the lot of them in a giant landfill. Why does ET keep falling in holes? Why does he look like a pixel penis? And why does a man in a lab coat suddenly and randomly appear?? Howard Scott Warshaw was trying to make the most epic Atari cartridge ever, but sadly it was a rush job and limited by the hardware itself, so the nuances got lost in translation. Much like my Star Wars post… Oh the irony…

Until next time…I’m off to weep over the YouTube video I just saw that suggests that Cloud actually killed Aerith…le sob…le really big sob!!!