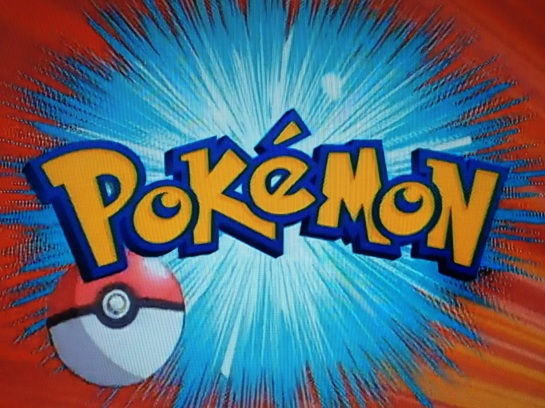 You ever have a moment that you can pinpoint almost 20 years later? I can do that with Pokemon. The first time I saw Pokemon, it was an ad for the game, in my Spider-Man comic book. I had the original red/blue, and watched the anime, even though I was in high school. I still play the new games as they come out. I also own nearly all the anime on DVD, except for some of the Johto Journeys that came out during my not living at home, no money phase. Anyhow, I love nearly everything about the franchise. Let’s start the show! 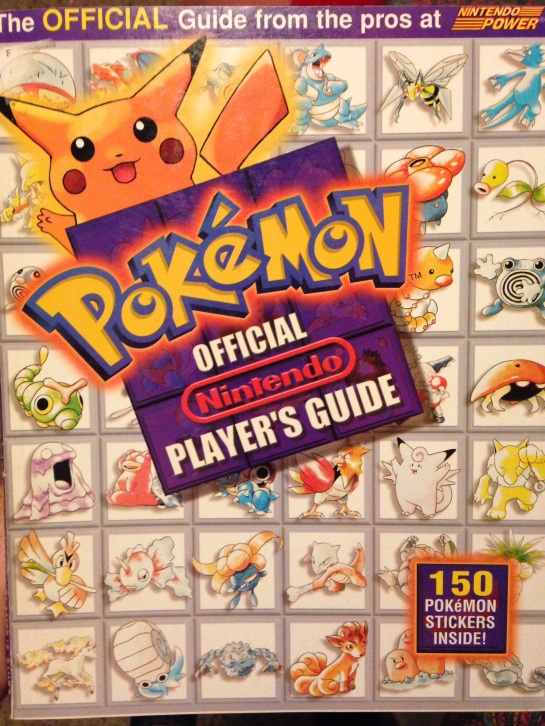 I can still sing the opening theme verbatim despite not watching any of the Indigo League for several years now. It has everything you could want. Mewtwo, Mew, Brock & Misty, Team Rocket, Gary, Professor Oak, Officer Jenny, Nurse Joy, Delia Ketchum, and of course, Ash & Pikachu. Buckle up kids, this isn’t the cutesy version that airs today. This is old school, black and white Gameboy era stuff. Speaking of, we hear the opening game credits, and see Gengar battling Nidorino, just like in the game. Then we pan out and get normal animation. As Gengar puts his opponent to sleep with hypnosis, it is recalled and a new Pokemon is sent out. It’s episode one, so I’ll forgive the fact that Onix emerged from a green pokeball, instead of traditional red. 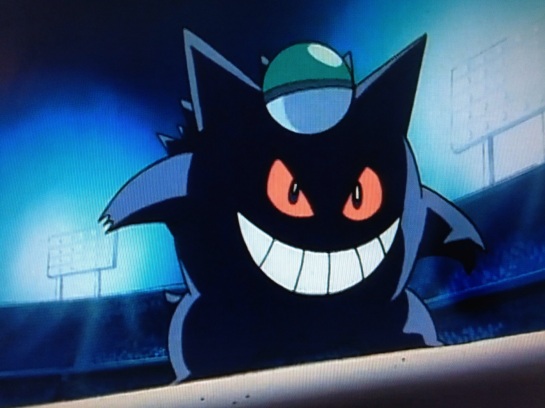 It turns out that the match is on tv, and Ash Ketchum from Pallet Town is watching. Ash is ten now, and can finally get his Pokemon license. He declares to the Pokemon of the would that he’s going to be a Pokemon master. They never tell us what that means. Will he master all Pokemon everywhere? Is it a job title? Breeder, coordinator, those titles are descriptive and make sense. Pokemon master, not so much. Ash’s mother comes in and tells him to get to bed, but Ash is too excited to sleep. He starts his journey tomorrow. That’s right, ten year old, out in the world, on his own. What could go wrong? Delia tells him to watch something educational, and turns it to Professor Oak talking about the three starters available; Bulbasaur, Charmander, and Squirtle. Ash dreams about what it would be like to have each one.

Ash is so involved in his dream, that he breaks his Voltorb alarm clock. Realizing he overslept, he hauls ass to the Professor’s to make his choice. Upon arrival, we meet Gary, Ash’s rival. He’s arrogant, but doesn’t have any of that Kaiba charm to balance it out. He’s just obnoxious. Poor Ash, just starting out and he’s already behind. Professor Oak appears, telling Ash he looks ready for bed, not his journey. Ash doesn’t care, he just wants a Pokemon.

In the lab, Ash chooses Squirtle, but it’s already taken by someone who was on time. Alright, Bulbasaur then. Nope, also given to a punctual kid. Well, he wanted Charmander anyways. Too bad it’s gone too. Isn’t there anything left? Cue the fourth pokeball. The professor tells him there’s something wrong with this last one. Ash doesn’t care, releases it from the ball, and Pikachu is revealed. The professor says they can be shy, or have an electric personality. Yay, poke-puns! Pikachu shocks the hell out of Ash. This is gonna be fun. 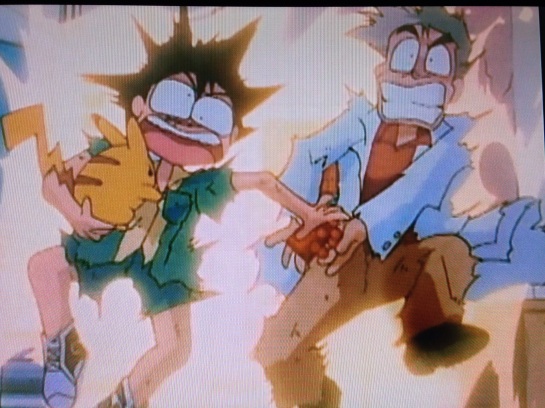 After getting his Pokedex and pokeballs, Ash heads outside. His mom and a small group are waiting, and cheer for him. She’s just so proud. He’s old enough to take care of himself now. Still ten, by the way. Delia gives him his clothes, shoes, backpack, gloves, and undies. Darn moms. She sees Pikachu out of his ball, and finds it odd. Ash tosses the ball at him, and it gets knocked right back. Several attempts later, it’s still not happening. Episode one, so I’ll overlook the lack of red return beam that was used in the battle on tv. Delia says it’s odd that Pikachu isn’t in his ball, and that rubs him the wrong way. He shocks the entire crowd, and the professor tells us Ash’s gloves will be useful since they won’t conduct electricity. 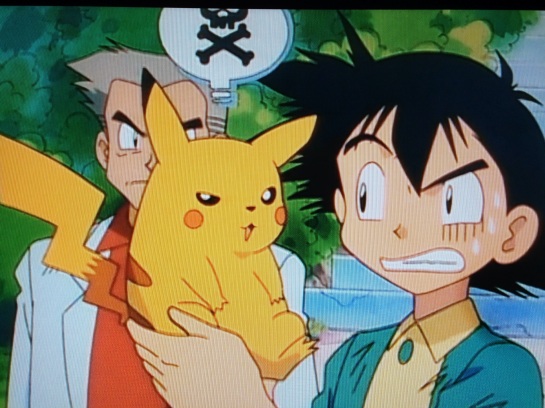 Cut to Ash wearing the gloves, and pulling Pikachu down the road. Great animal care, Ash. He stops, and asks if Pikachu is gonna be like this the whole time. Is it because you don’t like me? Pikachu nods. Ash tells him to open his mouth and say what’s wrong. Pikachu complies, but it doesn’t help. He can only say his name. Kinda like when I greet my cats, they only meow a hello back. Animals don’t talk, dumb ass. Since Pikachu is just like any Pokemon, he should act like one. The Pokedex says he should be in his ball. Pikachu pushes a button and it goes on to say that some Pokemon hate to be confined. Ash undoes the line he was pulling him with, and removes the gloves. Maybe that will help. Pikachu prefers to be free, with no rubbers, it just feels better. Sorry, that one was too good to pass up.

Ash sees a Pidgey, and tells Pikachu to go get it. Pikachu responds by climbing a tree to rest. Ash doesn’t need him. He vowed to get every Pokemon in the world. He throws the ball, and for a moment we think it works, until the bird escapes. Pikachu just laughs at Ash’s failed attempt. Not one to give up easily, Ash tries to use his pajama top to catch Pidgey. After being hit with a gust and a sand attack, Ash watches as it flies off. Pikachu continues to snicker. A Rattata gets into Ash’s bag, and the Pokedex says they steal from stupid travelers. Pikachu is gonna wet himself he’s laughing so hard.

Three more Pidgey pop up, and Ash decides to try throwing a rock. Not only is it a bad idea in general, you don’t throw rocks at wild animals. He misses the trio, but sees a lone one. Going back to his rock idea, he connects this time, right on the head of a Spearow. It looks pissed, and rightfully so. It goes after Ash, who manages to dodge. Then Spearow sees Pikachu, and attacks him too. Ash tries to say he threw the rock, but birdy don’t care. It circles and circles trying to knock Pikachu out of the tree. Pikachu unleashes a lightning attack, and zaps the bad bird. Too stupid to try and catch it, Ash just watches as Spearow calls it’s friends from a nearby tree. Ash asks Pikachu if they should run. Pikachu nods.

Ash says no matter what, he’ll protect Pikachu. Pikachu runs ahead of him. You don’t have to be faster than the Spearow, you just have to be faster than your trainer. That is, until they outnumber you, and start attacking you. Kids, the lesson here is to be kind and respectful to all animals. Ash learned the hard way, so you wouldn’t have to. He gets Pikachu away from them, and even jumps into a river to escape. We see a girl fishing, and she manages to catch Ash. She sees Pikachu, and starts yelling at Ash to get it to a doctor right away. I love Misty. The Spearow flock catches up to him, and Ash puts Pikachu in the basket of Misty’s bike and takes off. Thief! 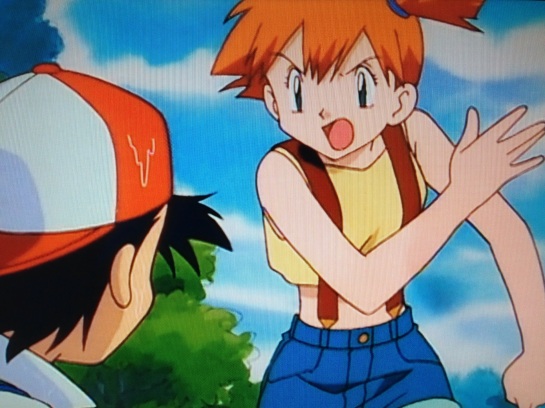 As he rides, dark clouds fill the sky, and rain starts to fall. This isn’t good. The Spearow catch up, and Ash crashes. He crawls his way over to Pikachu, and asks him to get in his pokeball. Ash knows he doesn’t like it, but if he trusts him, he may just be able to save him. Ash sets the ball down, and stands between the Spearow and Pikachu. He’s Ash from Pallet Town, he’ll be the world’s greatest Pokemon master, and can’t be beaten by the likes of them. The birds don’t care, cause they don’t know what a Pokemon master is. Join the club. 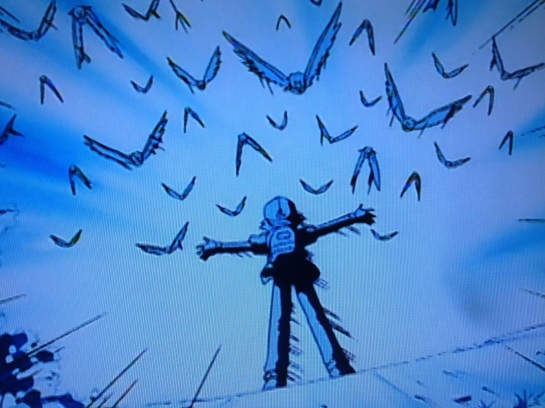 Pikachu does, and is so moved, he climbs up Ash to take on the flock. Now, I don’t know if a bolt of lightning happened to strike him and power him up, or if Pikachu summoned it, either way, a massive electric column takes out the Spearow, and Misty’s bike. The clouds clear, and we see a golden Pokemon fly near the rainbow. We now know it was a Ho-Oh, but at the time, the Pokedex had no clue. The voiceover tells us Ash and Pikachu’s adventures are just beginning, and will be filled with laughs. We see Pikachu lick Ash. They’ve bonded, and are now lifelong friends. Now that’s the way you finish a series premier.