Greetings, geek fans! It occurred to me that with all the post categories we have, we didn’t have one dedicated to handheld gaming. From the original Gameboy to the PSP and 3DS, there is a rich vein of material to tap. Granted, I haven’t been heavy on gaming posts so far, which is something I’m hoping to change. Although they don’t offer nearly the inappropriate humor that old cartoons do. I haven’t been too involved in my consoles, but I’ve been able to carve out time for handhelds during these busy times in Joshie world. With that being said, I decided to start with a more recent game, rather than our usual retro style posts. However, as you can tell from the title, I decided to start with a series that has a great history, rather than some new series. Let the geeks begin!

First order of business, you’ve gotta create your avatar. Name, gender, and skin tone are a given. You get to select your voice as well. Though it isn’t as though there’s a lot of dialogue for your character to speak. It’s more Link level shouting, grunts, etc. Then there are several facial options. Stop it! As well as selecting your eye color. You also get to choose your hairstyle, and color. I went with pink eyes and purple hair, cause that’s just how I roll. 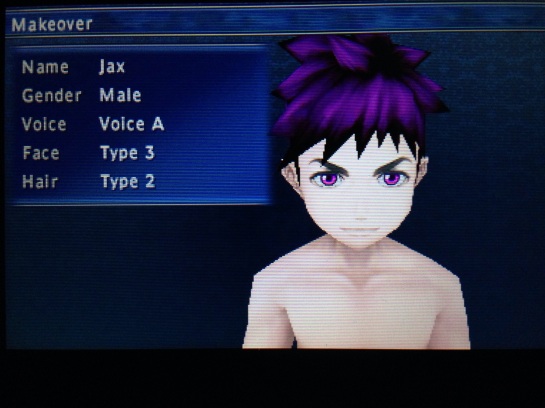 The game starts with your character in a cave, with a giant eidolon behind you. You’re prompted to run, as that is Bahamut, and you’re nowhere near ready to fight him yet. After escape you’re brought to the hub town of Libertas. The NPCs establish that you’re a freelance warrior, and in order to get a license, you have a complete a few tasks first. There’s a character named Cid, this is a Final Fantasy game after all. He tells you to talk to the woman in charge of quests, which starts you off on the tutorial quests that will give you the basics of the battle mechanic of the game. You can just slash your way through most of them, but as you continue, you’re able to forge abilities, techniques, and magics. Sub-Quest will open up as well, allowing you to earn extra rewards for meeting the conditions. Main quests are handled one at a time, while you can have multiple subs going at once. Accepting quests in either category costs Gil, but you more than make up for it by the time the quest is completed. 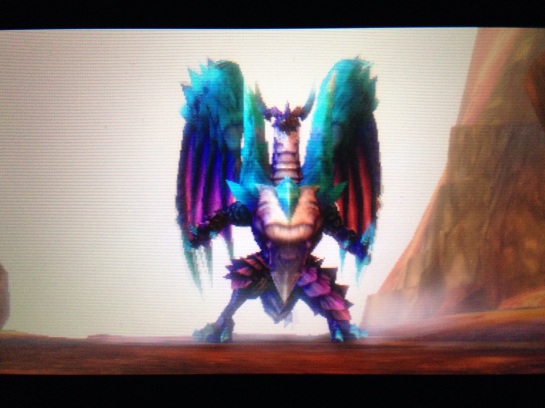 In Libertas there’s a fortune teller, shop, and workshop. You’ll be able to spend your Gil on weapons, armor, upgrades, and items. There’s also an airship, but you aren’t allowed access to it until you’ve competed a quest to earn the right. A Final Fantasy game wouldn’t be complete without Moogles, and there’s a Moogle shop in town as well. There’s a migrant Moogle merchant that I just adore, since any excuse to use alliteration makes me mildly merry. The Moogle shop items change, and they warn you that if you see something you like, get it right away. So far I’ve only seen basic items. The fanciest thing I’ve seen him stock so far was a Phoenix down. I’m hoping the goods will improve as I progress further. Another of the town’s features is a monster lab. I just gained access to it, so I’m still learning. The gist is that on your quests, as you defeat monsters, you can obtain their essence. If you take that essence to the monster lab, they can create a friendly version of the monster that you can then take with you as a party member. So far, I’ve made two.

I’m still struggling to get the plot of the game, as I’m used to the numbered entries like VII, VIII, and IX, where everything you do is to advance the plot. This seems more like monster hunting quests with a plot kind of woven into it. Granted, the crystal element isn’t exactly new to any Final Fantasy series. There are crystals throughout the world, and people appear to be fighting over them. There’s a main crystal in Libertas which is where you can spend your crystal points (CP) to create and improve your abilities. There’s a job system in place, but only a few of them are initially available. Currently, I’m a knight, as I like using swords, and slashing at the bad guys, er, monsters. There’s Streetpass enabled for FF EX, which allows you to exchange your license with the people you pass. It shows your current stats, as well as your role you play, as far as Damager, Tank, Healer… There’s another quest counter where you can get/give quests for Streetpass people to help with. I have yet to pass anyone with the game yet.

I know there are 12 Eidolons and 11 classic Final Fantasy characters that will eventually come into play. I’m only a few hours in, so I haven’t encountered them. I’ll need to either write a new post as I get further in, or I’ll update this one. I haven’t decided yet. Until next time, stay geeky, and keep gabbing!