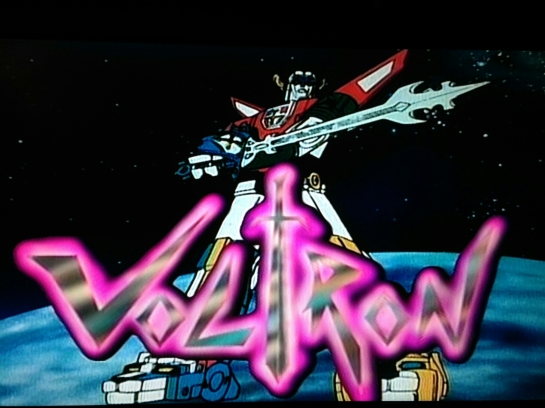 I loved Voltron as a kid. It was full of excitement, colors, men in tight suits. Alright, I didn’t know when I was that young that I was gay, but looking at it, a lot of 80’s cartoons had homoerotic tones. I’ll cover them later. I had the full lion set growing up, and still have my black lion, Haggar, and Zarkon figures. When they started airing them again I was in high school, and I would literally run home to catch them. Anyone who knows me knows I don’t run. Ever. Let alone back then, but for a cherished piece of childhood nostalgia while dealing with the drama of high school it was worth it. Where was I? Oh yeah, I also have a full lion set from the rerelease. No, that’s not where I was. Damn shiny kittens. Right, the episode. I haven’t sat and really watched Voltron in at least a decade. While I know it hasn’t changed, I know that I have. I may have to use the nostalgia filter for this one.

From days long ago… What a great way to start a show/series. The opening credits give us the history of Voltron. A mighty robot, loved by good, and feared by evil. The galaxy alliance of the “good” planets in the solar system maintained peace, until a new threat emerged, and Voltron was needed once more. Damn that’s good voiceover. One thing, it says Earth is where the alliance is, but when they say that, there are far too many planets/moons in the shot. Hmmm. The opening credits end with five men in clean, form fitting attire. There’s something for everyone, slender, short, tall, bulky. This isn’t comic books, so there’s no bulge of anatomical correctness. That, or they were edited out because this is America, and things like nudity, penises, and such don’t exist here. Or, it was the 80’s, and we weren’t ready for that on tv yet. Either way, the intro has me hooked.

Keith is transmitting that they’re approaching Planet Arus. Calling Galaxy Garrison! It appears that Arus is under attack! Keith and the others are serving up spacesuit realness as they watch the destruction through the telescanners. Looking at the ships that are attacking, they conclude that it’s King Zarkon and his forces attacking the planet. Keith says they’re gonna get closer. We see the destruction of what I presume is several cities. However, something eerily resembling a fallen Eiffel Tower is there. Keith says the people of Arus must have made it to their underground shelters. That or they’re, you know, dead. This had to have been Earth before the dubbers and editors got ahold of it. Paused and researched. Yep, Earth. It was Earth in 1999. Funny to be writing that in the year 2015. Alright, I can already tell that certain changes made to protect the children are going to bother me. I’ll press on. C’mon nostalgia filter. Hang in there. We’ve only just started. 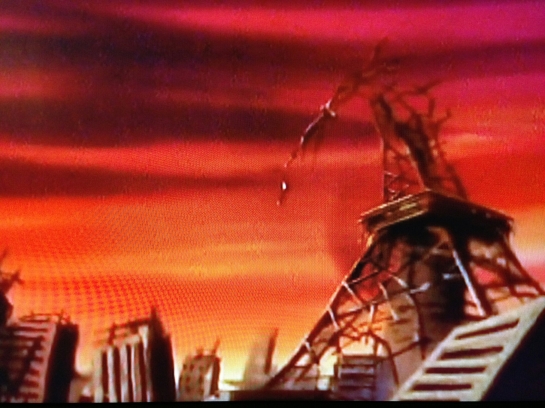 Sven says they need to get down there as fast as they can. This time when we see they crew, they’re in normal clothes. Where was the continuity checker for this episode? It’s the premier, guys. At least TRY to be consistent right out of the gate. Anyhow, one of Zarkon’s ships is there, and tries to tractor beam the explorers ship. At least, that’s what the dialog would have us believe. The animation looks more like they were blasted. Keith says they need to eject, it’s better than crashing. Which is it guys? Kid me didn’t care, but I do.

Galaxy Garrison. High ranking officials discuss the fact that Keith and company are in danger, and they need to send help. Sgt. Buzzkill says they’re over 2000 light years away, and they’ll never get there in time. Here’s hoping they can escape. The grey haired officer recalls a legend of Arus, about a castle of lions, and super robot, Voltron. Voltron could save them. Let’s break this down, their people are missing, or captured, and since they can’t get there to save them, here’s hoping the crew can discover the secret of the legendary Voltron, from their possible prison cell, and get him to help them. Sure, Jan.

On the good ship Zarkon-pop, they alert Plant Doom that they have a fresh group of slaves from Arus, and five space explorers too. The guy saying all this sounds like a cross between the Monarch, and Stewie Griffin. It’s distracting. Meanwhile, in Castle Doom, Zarkon is saying how he now rules the universe, and thanks to catching Keith and crew, he need no longer fear the galaxy alliance. Um, how, exactly? I don’t wanna be that guy, but how does catching five astronauts give you immunity from, you know what, I’m just gonna go with it. All hail, Zarkon! Who, by the way, is serving up playing card realness, complete with scepter and ball thingy I’m too lazy to look up the proper name of. Haggar warns that the castle of lions holds the secret of Voltron. Better hope they don’t discover it. Clearly she knows they’re gonna escape, or it wouldn’t be an issue. Shady witch.

The ship arrives, and they are told to throw the space explorers in the tower dungeon and guard them securely. As opposed to insecurely, I’d imagine. The rest of the slaves are to be brought to the arena. In their cell, Keith tells the others that Zarkon must be hosting a tournament, and they’re invited. Pidge is in no hurry. Cut to the guard captain telling the slaves to hurry, or they’ll suffer at his whip. We see him wind up. It looks like an energy sword, but on the downswing it doesn’t connect. Then we see him standing there holding nothing. Insert Mrs. Lovejoy. Won’t somebody please think of the children! 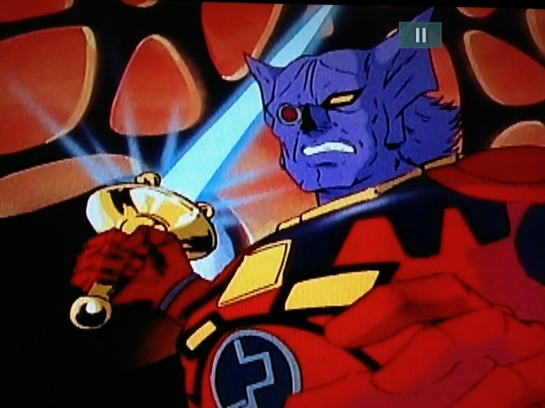 Zarkon is told the slaves are ready, and we cut to the arena. All of Zarkon’s people are dressed up for the occasion. Category is – Shakespeare eleganza. The blue Robeast is released, and it looks nasty. Can’t see a guard whip a slave, but this nightmare fuel is ok. The kids can handle it. Stupid censors. Some slaves try to flee, others try to fight. The Robeast beats them all. Zarkon and his people are pleased. Zarkon says it’s time for the space explorers to face the Robeast.

In their cell, Keith says they’re slated for slavery, or worse. We see that our heroes have been tattooed with a skull. Hunk says Zarkon will pay for that. He wanted his first to be tribal ink, or a nautical star. They see a window, and Hunk says he could bend the bars easy if he could just reach them. Pidge can, and leaps all the way up to the window. Dunno where these powers of theirs came from, but I’m going with it. Pidge can see right into the feeding pit, and wants to leave before they’re all next. Hunk wants to get his hands on Zarkon. Seriously, he wanted like a butterfly, or a dolphin, not a skull. They come up with a plan involving the rope they were originally tied up with, and getting Hunk up to the bars. After all, they’re space explorers, and they need space.

The guard comes to see if they’re ready to fight. They all pretend to be asleep. Being a benevolent, and not at all barbaric race, they allow them to sleep so that they can fight better tomorrow. Since the guards fell for their ruse, the explorers spring into action. Pidge gets the rope secure, and Hunk bends the bars with relative ease. Heights on the other hand, freak him out. Right after I think it, Lance voices my thought about a space explorer afraid of heights. They use what rope they have to go down to the next level. From there, they get attacked by large doom vultures. Each explorer grabs onto one, and they use them to get away. That’s actually pretty clever. My faith is getting restored. 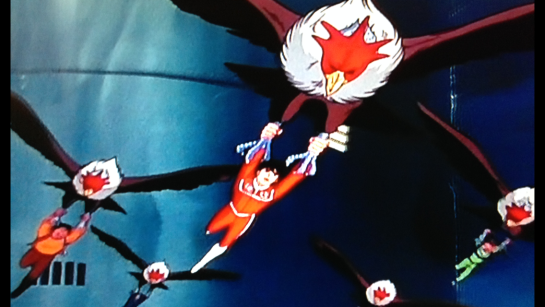 Our heroes are dropped onto a pile of bones, next to a lake of lava. Well, this is Planet Doom, after all. The team runs away as heroic music plays. I spoke too soon. They didn’t run away. They ran towards, and snuck into, the very arena they were supposed to compete in. Keith says they need to find the slave ship that brought them. The doors close, and they’re assaulted by the putty patrol. I mean, Zarkon’s men. Even though the enemy has swords, the explorers manage to defeat them. How is it Zarkon rules the universe again?

Take a moment to really appreciate their outfits before you continue. Back to the show. The crew steals the slave ship. This is a race capable of space travel, but there’s no security measure to prevent unauthorized people from taking their stuff. Dark Helmet said it best; Even in the future nothing works. Keith crashes into one of the castle pillars on their way out for good measure. Zarkon orders the captain to go get them back. The captain says the ship they took is slow, and he can overtake them. In no time, he catches up to Keith and the others. After a brief laser fight, it appears the space explorers are going to crash. The captain says Zarkon will be pleased. Doesn’t bother checking for wreckage or bodies, or even making sure they actually crash. Ah, the incompetence of 80’s villains. 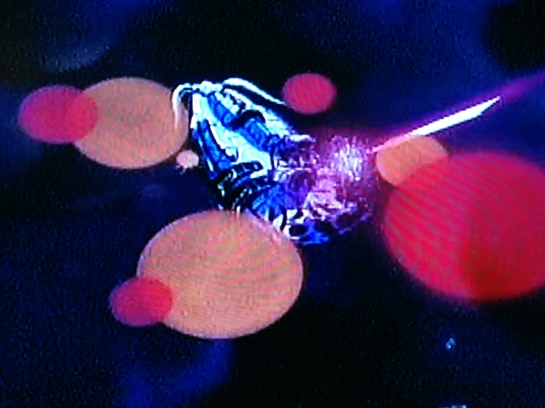 As the ship enters the atmosphere of a nearby planet, it’s hit with a glittering golden shower, which stops them from crashing. Keith says they’re being pulled to a castle, and are on Planet Arus. The source of the the beam is a statue of a lion with wings. That must be the legendary castle of lions. Hey, isn’t that where the secret of Voltron is hidden? Some secret if they all know about it. Keith tells the legend of Voltron. He was terrific. The most invincible fighter in the far universe. Voltron sent the evil robots packing. However, Haggar disguised herself as a beautiful goddess, and when Voltron approached, she cursed him. Not being able to destroy him, Voltron was broken into five robotic lions. Um, if it really was Haggar, she could just re-curse Voltron if he ever came back. Sadly, it was another dub issue. Can’t go mentioning actual goddesses in Christian America. Where was I again?

Hey, if we could find the lion’s hidden dens, they could merge somehow, like the legend says. Two for the legs, two for the arms and body, and one for the head. Then we’d have Voltron, defender of the universe. Oddly non-specific legend. Maybe that merge part is the secret everyone keeps talking about. Keith doesn’t know where they’ll land, but if they can find Voltron, they can save Arus, and defeat Zarkon. Fun fact, despite not getting the form fitting attire, or the lions in this episode, we do get the lions uniting footage during the legend, which is almost as good. Alright, they got me back on their side with that. I’ve loved that sequence for nearly 30 years. Oh lord that makes me feel old.

Pretending I know nothing of the series, I’d say it doesn’t seem good that during end credits there’s a yet unnamed princess, but no Sven. I’ll leave you to ponder/remember/google that. Until next time!