That is a very long episode title to start the series with. 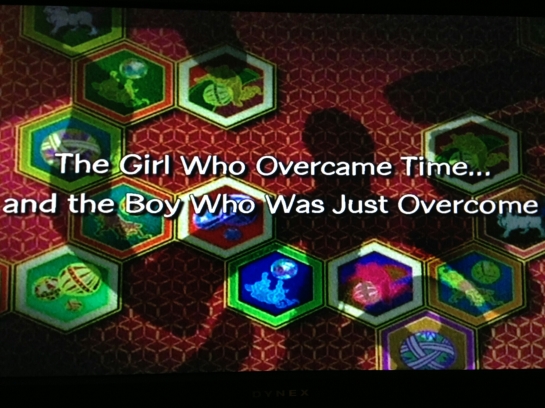 We open with villagers screaming the series’ name. Alright, they’re actually screaming at the red-clad, white-haired half-demon that just broke out of a net. He crashes into a temple, and takes the shiny jewel of awesomeness. Finally, a way to be a full demon at last. We see a clearly injured woman call his name as she draws an arrow and fires. The arrow of sparkly magic hits him in the shoulder, and pins him to a tree. 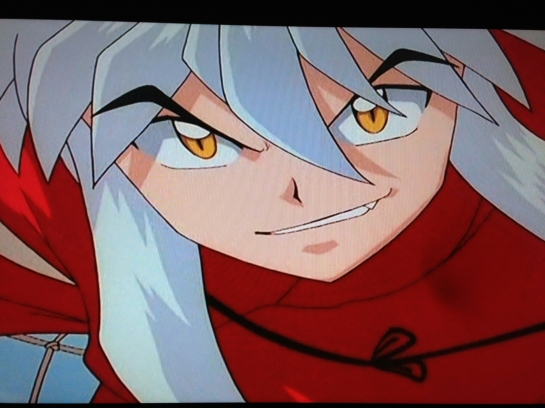 The jewel falls from his hand. Inuyasha sees who shot him. Kikyo, how could you? He thought- Before he can finish, he passes out. Kikyo retrieves the jewel, as her little sister, Kaede, comments on her injury. Kikyo isn’t worried out the pain. She won’t feel it much longer. Kaede is instructed to take the sacred jewel and burn it with her body. Kikyo will take it with her to the next life. We cut to the jewel glowing as the flames consume Kikyo. 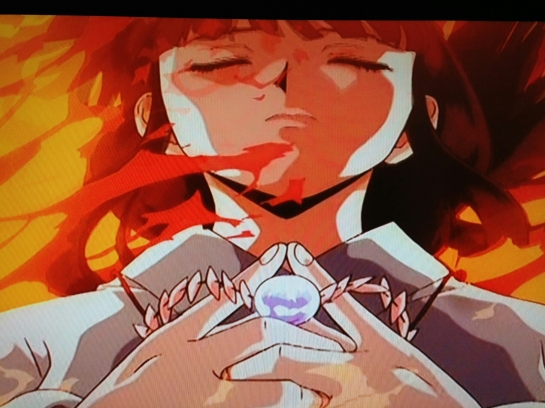 Modern times. Shikon no Ma? No, Shikon no tama. Kagome is getting schooled by her grandpa on what the sacred jewel was. She’s looking at the keychains he ordered, and is surprised he thinks people would buy them. As he tries again to explain, her cat keeps batting at the one in her hand. It makes me giggle, as I have three cats, and that’s exactly what they do. Kagome reminds him that it’s her birthday tomorrow. He got her an authentic mummified hand of a water imp. She gives it to the cat.

The thousand year old sacred tree. The legend of the hidden well. Kagome has heard these stories all her life, but didn’t believe them until today, her fifteenth birthday. As she leaves for school, she notices her brother is hanging out to the door to the well. He can’t find the kitty. They hear a noise, and he says there’s something down there. Yeah, the cat. Kagome is a bitch, and I love her for it. She hears a noise coming from inside the well. The calls are coming from inside the house! The boards on the well break from the inside, and spectral hands reach out and drag Kagome into the well. They belong to a topples, multi-armed lady demon. Uh oh. Kagome screams for the demon to let her go. Let her go! Can’t hold her back anymore! Kagome’s hand glows, and she gets free. 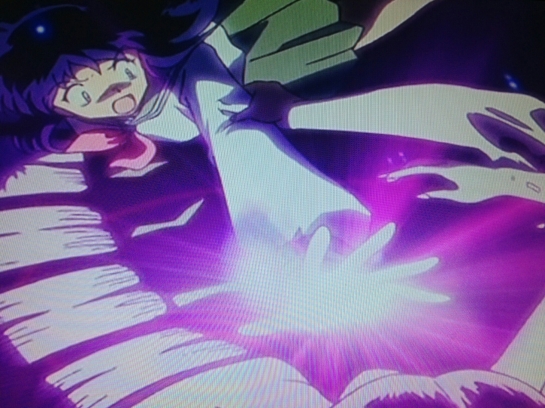 Landing in the bottom of the well, Kagome starts to climb out of it. Despite not being in the building she was in when she entered the well, she still feels the need to call for her mom, gramps, brother, and cat. She realizes she’s not in Tokyo anymore. She sees the sacred tree, and heads towards it. Upon arrival, she notices Inuyasha still secured to the tree by the arrow. Roots and/or branches have grown around him, so we the audience know it’s been a while since he’s been there. Kagome goes up to him, and touches his ears. Just had to get that out of her system. Villagers with arrows fire on Kagome, and capture her.

Bound in the village, Kagome is looking around. She’s noticing all the clothes and hair. What is this, Japanese medieval times? High priestess Kaede arrives, and throws salt or powder on Kagome and tells the demon to be gone. She’s not a demon, she’s just serving Japanese schoolgirl realness. If she’s not a demon, why was she in the forest of Inuyasha? Um, why were the villagers that shot at her? Whatevs, Kaede. She really looks at Kagome, and says “it’s there”. Cut to that night, and Kaede is feeding Kagome. She looks at her, and sees her sister Kikyo. Kaede says it’s been fifty years since she died.

The centipede demon attacks the village, her target is Kagome. She demands the sacred jewel. Kaede asks if Kagome has it. Schoolgirl is clueless. She’s heard of the jewel, that’s about it. Kaede says they need to get the demon to the dry well, in the forest of Inuyasha. Kagome asks if that’s where the light is shining. Kaede is surprised that Kagome can see the unseen. Kagome flees the village, trying to draw the demon away. As she runs, she pleads for help. Someone! Anyone!

Inuyasha twitches awake on his tree. He can smell the blood of the woman who trapped him. He reaches for the arrow, and it glows. No breaking your curse today. Kagome arrives, and Inuyasha taunts her about playing with bugs. The Kikyo he knew would never take this long to finish off a demon. Kagome is surprised that Inuyasha is alive. As he calls her Kikyo again, the demon arrives. The villagers manage to harpoon it, but can’t do much else. Inuyasha calls her pathetic. She says she’s not Kikyo. Then why do you smell like her? He sniffs her again, and says she’s not her. Getting her teenage attitude on, she says she’s Kagome. Ka-go-me. Snap! The demon grabs Kagome, and she in turn grabs Inuyasha’s hair.

Kaede and the others see that Inuyasha is alive. Kaede says the seal should have lasted forever. Time travel moment, but he wasn’t on the tree in Kagome’s time, so we had to know he’d get free. Granted, he’s the title character, so we knew that anyway. The demon mentions the jewel again, and that has Inuyasha’s attention. The demon grows fangs, and Kagome holds out her hand screaming to go away. Her hand glows, and forces the demon back again. Her chest glows, and before she can wonder what’s happening, the demon bites her, and the jewel falls from her body. Inuyasha begs her for the jewel.

Lady centipede wraps up Kagome against Iniyasha and the tree. She’d heard about a half demon out here. Half is all he needs to kick her hide. He’s so arrogant, I love it. Kagome asks if he can back it up. The demon taunts that they’re both pinned, and helpless. She then eats the jewel, and takes on a more horrific form as she says her power is complete. Inuyasha asks Kagome to pull out the arrow. C’mon, nothing bad will happen if you pull out. Kaede says not to, or he’ll destroy them all. He tells the old hag to shut up, at least with him they have a chance. The centipede just wants to eat them. 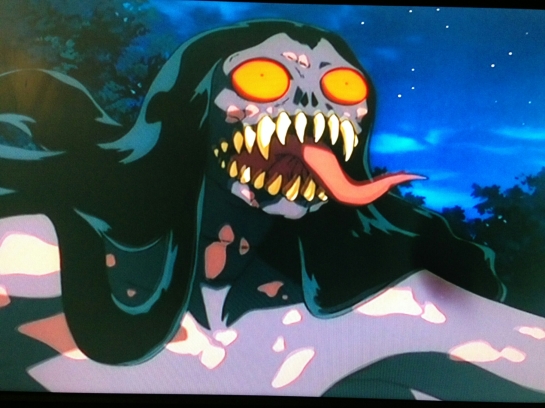 Kagome chooses life, and grabs Inuyasha’s arrow. It dissipates in her hand. Well, it had been fifty years since he’d been touched. Inuyasha is free. The centipede tries to crush them, but with a flex of his power, parts of her are blasted off. He calls her a nasty hag before attacking her. Iron reaver soul stealer! He uses his claws and cuts her down the middle, and into pieces. Kaede tells her to get the jewel or she’ll revive. Once extracted, the body turns to bones. Kaede gives the jewel back to Kagome, who wonders how it got inside her to begin with. Inuyasha tells her humans can’t use it, and to hand it over before he sharpens his claws on her. Wait, he’s not the hero? Credits 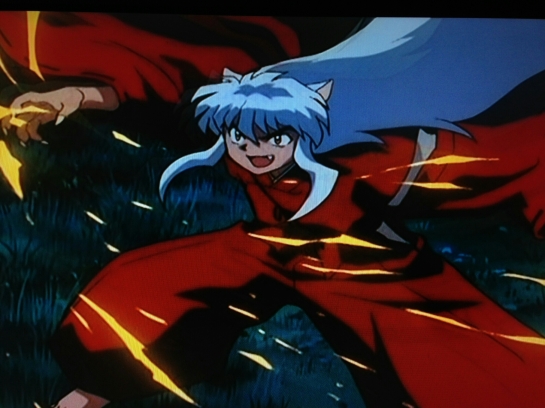 I didn’t get as into Inuyasha as I have other anime. Made it halfway through the series, then was distracted by something shiny. After rewatching the premier, I may need to go back and finish it. The snark and bitchiness appeal to me. I can’t imagine why. Until next time, everyone!
–JJ