Morning in Berry Land. Shortcake wakes up her own alarm clock, and tries to wake her cat, Custard, and he ain’t having it. She tells him he needs a Smile that’s worthy of a cloud, and we enter a musical number as we wander Berry Land waking up the birds and bunnies. 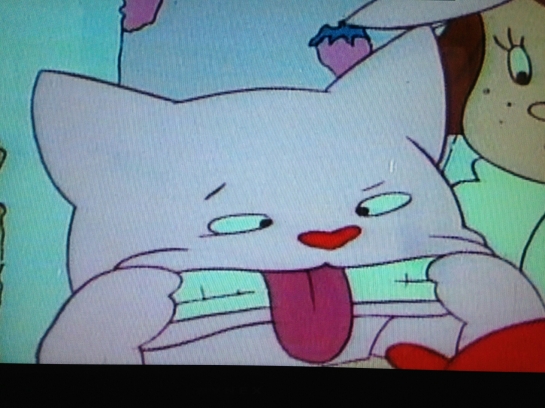 Watching this, I notice that Shortcake is the size of a strawberry, but we’ll touch on that more in a bit. The sun tells us that the Peculiar Purple Pie Man, of Porcupine Peak is watching her from his magic pie tin. He sends his berry birds after her to go get berries for his pies. Cause if you’re a pie man, you’ve gotta have berries for your pies. Pudding, fruit, or custard just won’t do.

The birds attack, and our title character is defended by the whomping willow, that hadn’t yet been cast in Harry Potter. She calls him her official scarecrow. His evil (?) plan thwarted, the Pie Man cries, and vows to get those berries. Then he states his full title, and does a little dance, ending in jazz hands. No, seriously. The only thing peculiar about this guy, aside from being the the only adult around, is that he seems a little light in the loafers. C’mon, affinity for purple, loves baking, breaks out into song and dance, gurl. 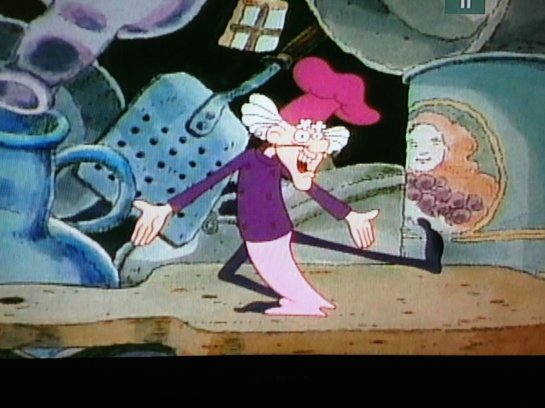 Moving on. Huckleberry Pie is loafing again. Doesn’t he know it’s Shortcake’s birthday? Bitch needs to plan a party. Off to Blueberry Muffin’s! She’s a space cadet. We need Plum Pudding for this. He’s the smart one, you know. He’s got a chalkboard with numbers on it and everything. He concludes that it should be a surprise party, but they need to get Raspberry Tart.

She says that Shortcake is 7 if she’s a day, and is chastised by our loafer, Huckleberry not to say what she thinks, until she thinks about it a little more. Cause, ya know, she’s a girl and all. There’s a baby, Apple Dumpling. Um, they’re all kids, and the only grown up is a purple queen. Where’d this kid come from? Hashtag Mysteries of Berry Land.

Shortcake wants to have lunch with her friends, but they all make bad puns about why they can’t, including this gem; “I plum forgot”. In reality, they’re all meeting to discuss her party and gift. Huckleberry’s bug, Lucky, is sent to spy on her.

The Pie Man is in an older male drag, and serving dildo nose realness. Um, Shortcake is smaller than a book of matches. What ARE these kids?? Sorry. Moving on. He opens his coat to reveal his big, selection of watering cans. No flashing the minor today. He offers her a discount on his magic can, but she can’t afford that, and walks away sad. Lucky bug springs into action, and tells the peddler to go to the park. Shortcake’s friends buy the can, and he ominously says they won’t regret it. *Record scratch. Hold up, he was just paid in money. Can’t old Purple P just, I dunno, BUY some berries? 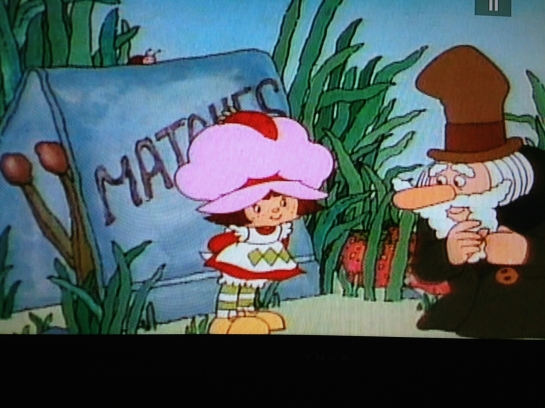 Shortcake is in a field, angstily wondering why no one likes her anymore. Boo hoo. I eat lunch alone all the time. It’s nothing to cry over. Or maybe it is. I should look at my life, but that comes later. The Sun ain’t having that. He sends Prima Strawberina to the park and her party. She’s so surprised. You like me, you really like me. Wait, that was Sally Field, not a berry field, anyhow, Raspberry Tart asks Shortcake if she’s a little old for such things. If Tart wasn’t the inspiration for Robot Chicken’s Bitch Pudding, I’d be surprised.

The magic watering can sprinkles, then starts gushing water. They try to stop it and plug it, but nothing works, not even a berry! Gasp! He really wanted those kids soaked. Oh no! It’s flooding Berry Land. The kids announce Lord Purple Pants by his full title, and of course he has to dance and pose. He says he’ll stop the water in exchange for all the berries. They reluctantly agree, and along with all the berries, he gets Apple Dumpling. These kids just can’t win.

Shortcake is sad, and once again, the Sun, who let this all go down, by the way, says he can give her a gift. She tells him a gift won’t help, but this is a special gift. It’s a wish. She’s always had the power to return to Kansas, oops, wrong show. She wishes real hard for an army of whomping willows, and the wood rises for her.

Pie man, defeated, agrees to give back the berries. She tells him he can bring his pies to market, and they can all be friends. Cause every girl needs a GBF, right? Shortcake says they can have a berry grand time. He comments on her berry-speak. This leads to our final musical number with numerous examples of where to use “berry” instead of “very”. The highlight of this number is Purple Pants saying his mouth won’t do what it’s told. I seriously doubt that, girl. Then again, no Berry Grindr for hookups, or even another adult male for that matter, he’s just never had any practice. The song ends with everyone in a lineup as friends, cause, you know, the 80’s.