He is Adam, Prince of Eternia, and defender of the secrets of Castle Grayskull. His companion, Cringer is his fearless friend. Cause, with a name like Cringer, you’ve gotta be fearless. Fabulous secrets were revealed to Adam when he held his sword aloft and said, “By the power of Grayskull, I have the power!”. It transformed Cringer into the mighty Battlecat, while Adam became He-Man, the most powerful man in the universe. Only three people know his secret. Their friend the Sorceress, Man at Arms, and Orko. Together, they defend Castle Grayskull from the evil forces of Skeletor. Now that’s an intro that gets all the exposition out of the way, so that we can dive right in. 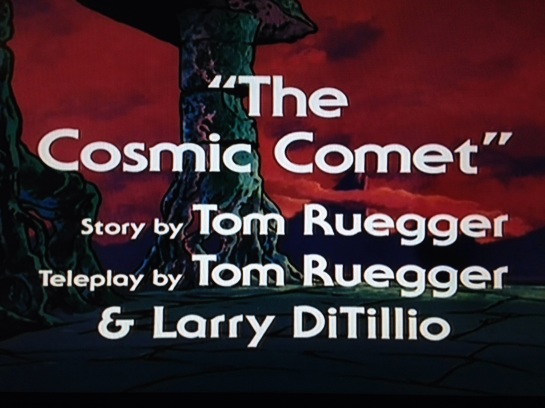 We open on Castle Grayskull with Evil-Lyn and Beast Man stating that the stars are just right, and the cosmic comet is passing. Time to open the gates of Grayskull. Evil-Lyn’s eyes glow, and the drawbridge opens, revealing He-Man and Man at Arms. He-Man calls Beast Man fur face, and the latter takes offense. To add injury to insult, He-Man tosses him off the bridge into a lake of mud. I swear that Beast Man says “fuck”, but as this was 1983, and a kids show, I’m sure it was really “suck”. Dude needs to enunciate better. Evil-Lyn attempts to conjure energy bolts to hit He-Man, but they backfire, and she falls in the mud too. Evil-Lyn swears they’ll be back. He-Man says they should clean up first. He’s a little OCD on cleanliness. The Sorceress tells He-Man that it was only a test, and they need to find the comet’s keeper, Zagraz. Where can he be found? Zagraz mountain, of course. Well, that’s convenient.

In the throne room, Man at Arms is telling the king and queen that he and Adam need to go away on a secret mission for the good of the kingdom. *cough Eternia white party *cough. King Randor says if it’s so important, Teela should go too. Adam and MaA exchange a look that clearly says, cock blocked. Orko invites himself along as well, and Randor refuses. That is, until Orko offers to practice for the banquet. Randor quickly changes his mind. Again, Adam and MaA look at each other. Dude, really? We’re never alone any more. Poor, frustrated muscle men.

Snake Mountain, Skeletor says the time has come. He joins hands with Beast Man and Evil-Lyn so they can join their powers. Since when does Beast Man have powers? I know it’s episode one and all, but come on. One of these things is not like the other… Whatever. Let their evil grow! They summon an energy orb, and send it after the comet. A short moment later, Skeletor says the cosmic comet is under his control, and then proceeds to wave his arms in the air like he just don’t care. White party weekend, y’all! 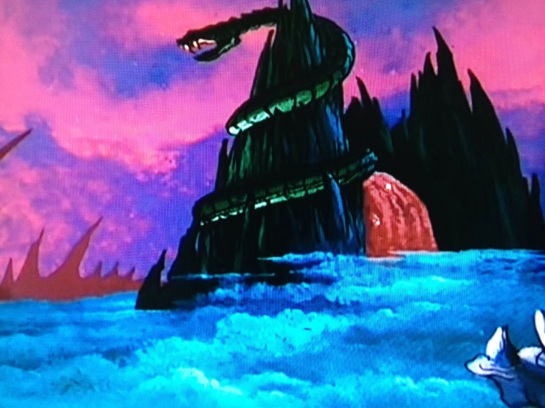 Adam, Cringer and company travel in a tank, with automated voice response technology. Man at Arms tells it to stop, and it confirms, then asks for instructions. Cringer tells it to turn back. Bad kitty! They arrive on Zagraz Mountain, and he’s glad to have the company. It’s been one, no, two hundred years since he’s had visitors. They ask Zagraz about the cosmic comet, and he says it’s all his fault. There used to be two, but he accidentally destroyed one during a display of his power. The other comet grew lonely without it’s friend. It lost it’s heart. Zagraz feels bad for what he did. Teela reassures him that anyone can make a mistake. That’s great and all, but Zagraz can’t control the comet, and Skeletor can. 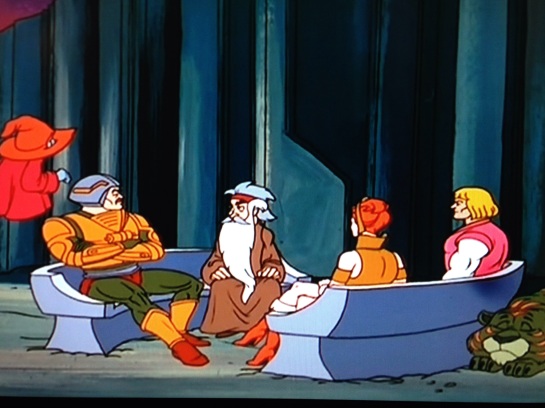 Speaking of Skeletor, he’s busy telling Beast Man that they need to take care of Zagraz, as he could try to interfere, despite losing confidence in himself after his little mistake. Skeletor orders the comet to send creatures to capture Zagraz. Adam sees them coming, and he and Teela run. He trips, and she goes back for him, so that she can knock him out of the way of the incoming comets. They land, and take humanoid shape. Zagraz says they were made from the comet’s power, but they aren’t alive; they’re more like golems. Cringer ain’t having it, and runs off. Adam is right on his paws, er, heels. Teela attempts to blast one, but nothing happens. Orko tells us that it was Teela’s freeze ray. Man at Arms tries his blaster, but it’s deflected back at him. This isn’t good.

Adam found the cave Cringer was hiding in, and tells him they have work to do. Cringer refuses. That is of course, until Adam pulls out his sword, gets all hunky, and shoots his white magic all over Cringer. Make it rain! He-Man mounts his newly confident Battlecat, and rides to save his friends. Meanwhile, Zagraz tries and fails to control the comet creatures. He-Man smashes them to pieces. Around that time, Teela comes to. She asks where Adam is, and doesn’t get an answer. Zagraz is upset that Skeletor controls the comet. Orko collects the pieces of the comet creatures, and stores them in hammer space. They need to get back to Grayskull.

The Sorceress says she should be able to help Zagraz. He-Man says it’s time to visit Skeketor. Only problem is, Skeketor can see that he’s coming, and sends Beast Man to slow him down. While he does that, Evil-Lyn will help Skeletor summon the comet to defeat He-Man once and for all. On the road to Skeletor, He-Man and the tank discuss old bone head. No one mentions that Adam is still technically missing, and so is Cringer. You’d think He-Man would be better at not blowing his cover story. Then again, if he’s always busy blowing, never mind. Beast Man tries to block their path, but the tank drives right over it. They shoot the wings off his plane, and send him crashing into another puddle of mud. Filthy beast!

On top of Snake Mountain, all covered with cheese… Sorry. Skeletor and Evil-Lyn are holing hands. He orders the comet to raise their powers, so that they can defeat He-Man. The comets blasts them with energy, and Skeletor feels so good, he jumps down the mountain, landing in front of He-Man and the tank. Skeletor tells him to greet Eternia’s new ruler. He-Man calls him a villain, and is blasted for his trouble. Evil-Lyn celebrates the defeat of He-Man. Skeletor reminds her that he’s the one who controls the comet. In a rare display of 80’s villain competency, Evil-Lyn says they should chain He-Man and crew up. As Skeletor tells her not to worry, they are teleported away. Damn that Sorceress. No more games. Time to set the comet on Castle Grayskull.

In Zagraz chamber, the Sorceress says that there’s nothing she can do to stop the comet. Apparently she can teleport three people, but not a chunk of space rock. Zagraz says if they make another cosmic comet, and fill it with light, maybe that will cancel out the other one. If only they had comet pieces. Oh wait, they do. Orko releases the pieces from hammer space. Teela is so happy she could kiss him. Zagraz says the Sorceress will have to meld all the pieces together again. Still no mention of the missing Adam and Cringer, by the way. Zagraz says to touch the reconstituted comet stone, and to focus on the good and light. The new comet glows, and thanks them for allowing it’s heart to beat once more. Talking comet, cause why not?

In the backup jet, Beast Man asks Skeletor if it’s safe. What if Grayskull wasn’t destroyed. Stupid coward, nothing can stop it now. Besides, he wants to watch it happen. He’s kinky like that. Alright, let’s just pause a moment. Nowhere in the opening, or this episode, have they explained why Skeletor wants Grayskull as much as he does. All we know for sure is that he’s the bad guy, just because he’s the one with the skull head. Maybe he’s trying to free Eternia from Randor’s rule, and gay heir, in Adam. We don’t know. Maybe Evil-Lyn was Evelyn until some bitch in high school called her Evil-Lyn, and it stuck. Poor villains. 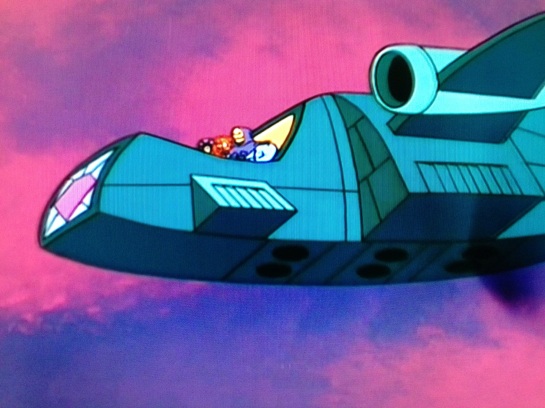 Zagraz is told by He-Man to get the comet into the sky. He can’t. If he makes another mistake… He-Man doesn’t care about your mistake. Try harder. Zagraz pleads with the comet to fly, but with no confidence, it’s just not happening. I’m sensing a theme. In an effort to buy time, the Sorceress uses her spirit fingers to send He-Man flying at the cosmic comet. He collides with it, but since they’re in the air, with no traction for his feet, I’m not sure how much of a delay they expected to cause. Teela pep talks Zagraz some more, and he managers to get it up for her. The comet, you pervs. The comets collide as He-Man falls to the ground. The talking comets thank them all for their help. Zagraz thanks the group for having faith in him, when he didn’t. Awww

The moral of the story is to have confidence in yourself, even if you fail. If at first you don’t succeed, try, try, again. No really, that’s the lesson. Man at Arms said so.