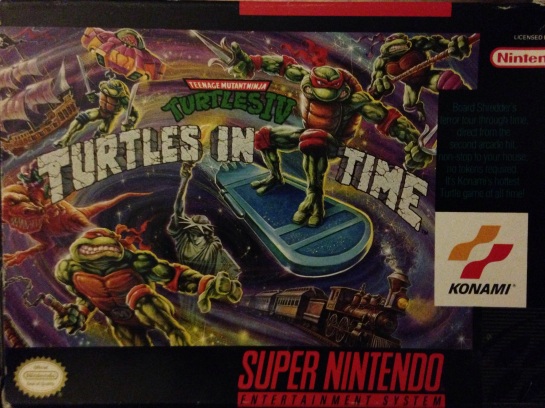 By Joshie Jaxon
Major nostalgia attached to this game. Not only did I used to play it in the arcade, I played it at home on the SNES. My cousin and I had a record that we used to able to beat the entire game in roughly half an hour. Sadly, when writing this piece, it took me over an hour. I blame it on the fact I was playing with myself. I mean, that there was no second player. Pervs. Let the geeks begin!

The game itself is simple enough. You control either Donatello, Leonardo, Raphael, or Michelangelo. Krang took the Statue of Liberty during one of April’s broadcasts. Once again, Shredder is up to no good. Rather than regular human authorities trying to stop him, cause who can fight a giant android with a living brain in it’s belly? It’s up to our pizza loving heroes.

The first few levels have us travel through Manhattan, alleys, and the sewers. The entire time we get to whomp on the seemingly never ending Foot Soldiers. They’re robots though, so it’s ok that we kick their asses. It’s even more satisfying when you get to throw them at the screen. The end of each level features a member of the Turtles’ rogues gallery. They have a visible health bar, but in case you’re too engrossed to look at it, the weaker the boss gets, the more they glow red/orange/yellow.
The real fun doesn’t begin until the Technodrome level. You fight your way through it, to battle Tokka and Rahzar. Upon their defeat, they revert to a wolf and turtle. Should you accidentally hurt the wolf version, it makes whimpering noises. Very odd thing to put into a cartoony kids game in the early 90’s, but whatever. After beating those two, it’s time to take on Shredder. He’s in a tank, and firing at you from the screen. Remember how I said you could throw Foot Soldiers? Guess how you defeat Shredder? That’s right, you summon Magneto and tell him that Shredder is anti-mutant. Actually, maybe that was just some bad fan fiction. Moving on.

Once you’ve tossed enough of his flunkies into him, Shredder announces that he’s banishing you to a time warp. Vat the hell is a time vorp?

Alright, I’m just gonna say it, Shredder has time travel technology, and rather than using it to say, I dunno, stop your enemies from mutating in the first place, you decide to hurl them back in time, as well as some minions and a boss, and hope they die before they reach you? Da fuq? Seriously, Saki, your boss is a literal brain and neither of you thought that through? Sigh. The game is fun, but as an adult the logistics of it baffle me a bit. For example, once you beat Slash in the dino-themed level, you just move to a new time period. There’s no explanation as to how or why. Logically, I’m sure the boss has a way to return to their proper time, but why not just ditch the turtles back there, and leave? For that matter, with the boss vanquished, do the Turtles just leave them back there to muck up history? Doubtful. Why not just return to their normal time period? The real reason for this behavior is that this was an arcade game, and we didn’t want a lot of story for our quarter. We wanted to mash buttons and kick some bad guy ass.

After going through all these levels and bosses;

Skull and Crossbones – Bebop and Rocksteady

Starbase Where no Turtle Has Gone Before – Krang
We return to the final level, Technodrome the Final Shellshock, where our opponent is none other than Super Shredder. Available now, for only two easy payments of $19.95, plus shipping and handling. Wrong super shredder. This one has three distinct attacks, based on his super saiyan aura color. Red, where he throws fire. Blue, where you can be turned into a turtle-cicle. And green, where you can be turned back into a harmless turtle.

Wait, wait, wait, didn’t I have that idea earlier? Now, not only can he do it, he doesn’t finish you when he had the chance. I know, I know. Whose side am I on? It’s been well established I love villains. That’s not going to change.

With the Shredded vanquished, the Statue of Liberty is returned to her home. April thanks the Turtles, as Splinter stands right there on local, or maybe national tv. Good thing it’s just a game, or there would be consequences in the next episode. In conclusion, this game still holds up 23 years later, and is still challenging. So go play with yourself, or play with a good friend. Just play; you’ll be glad you did. Goodnight everybody!