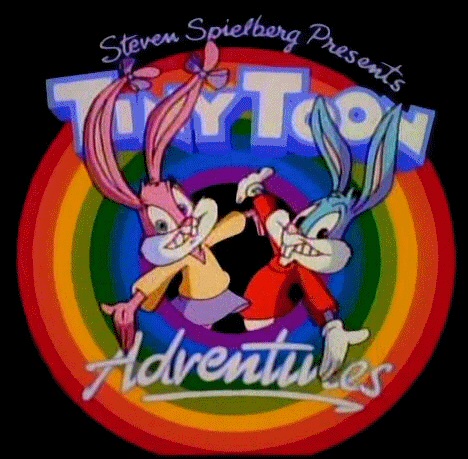 Let me preface this by saying, I prefer to post the pilot/first episode of a series before deviating to others, but as this is a special occasion, I’ve decided that will be my conditional allowance. In honor of Star Wars day, I bring you the second episode of Tiny Toon Adventures. Trust me, it’s worth the pilot skip. Although it’s more of an homage than a direct spoof. Enjoy!

Alright, I lied. One more warning, since you didn’t get the pilot first. The characters know they’re in a cartoon, and often break the fourth wall. NOW we can begin. 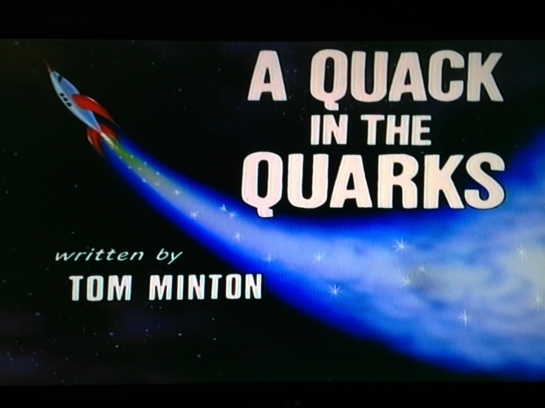 We open on Acme Looniversity, where Plucky Duck is boring his classmates, and Professor Leghorn, to sleep with the heroic tale of… his weekend. When he finishes, the sudden silence startles Buster Bunny awake, and Babs Bunny too. They read him for being a bragging diva. Babs doesn’t wanna tip the plot, but warns him that one day his bragging will get him in trouble. On cue, two exchange students come into the class. Their names are Frank and Ollie. Foghorn Leghorn asks who wants to show them around, and Plucky is more than willing. After they leave, Forhorn tells the audience “that duck spits out more words than a dictionary in a garbage disposal.” Speaking of garbage, Buster wants to know who wrote the script. Babs tells him to be nice. 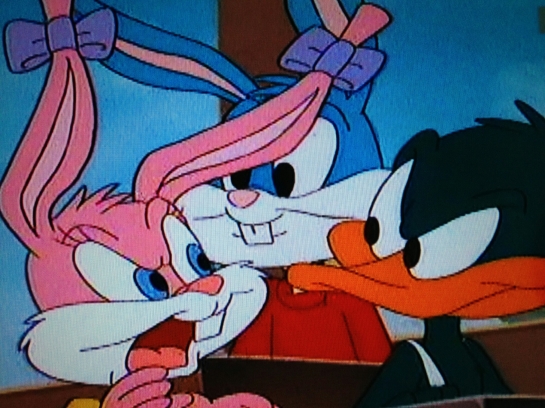 In the chemistry lab, Plucky continues to boast of his brilliance. His mixes a chemical cocktail which causes him to go through several physical changes, and colors, before settling back to his normal form, smacking his bill, cause ducks don’t have lips, and saying it was root beer flavored. Cut to the stadium and Plucky bragging, yet again. This time it’s about his athletic ability. He tells the new kids they should have seen him plant the old pole. Not at all a dirty joke. This is a kids cartoon. 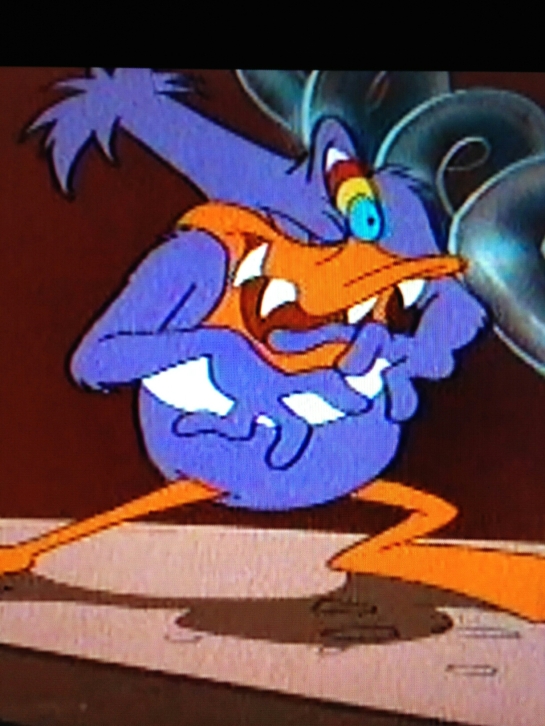 School lets out, and the gang wonders where Plucky is. Babs says that old motormouth must still be on his tour. Buster remarks that even Plucky’s tours don’t go this long. Back in the stadium, the new kids reveal themselves to Plucky. Not like that! I just said this was a kids cartoon. 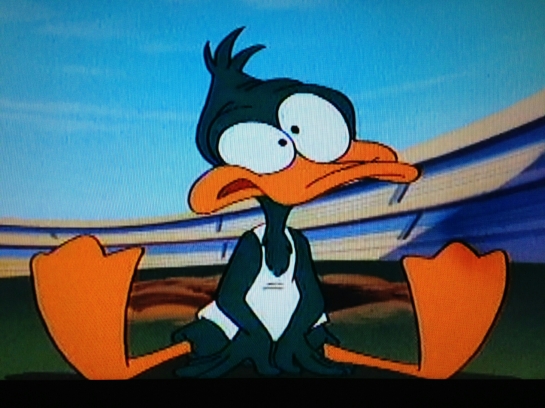 They reveal that they are aliens, and are looking for the bravest and strongest earthling alive. They summon their rubber ducky shaped spaceship, as Buster, Babs, and Hampton reach the stadium in time to see Plucky get abducted. Frank and Ollie apologize for kidnapping him, but they need a new leader. Having appealed to his ego, Plucky agrees, and they’re off to Planet X. 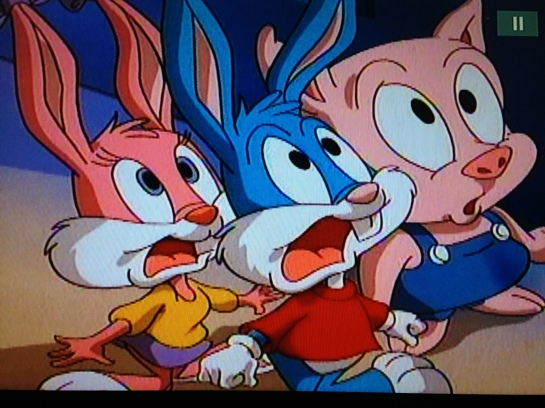 When they arrive, they announce that Plucky is there new leader, and the three people who showed up, cheer and celebrate. Plucky is sporting an outfit similar to, but legally distinct from, Luke Skywalker’s. Ollie says Plucky will have his work cutout for him if he’s going to beat Duck Vader. Even though Lucas and Spielberg are friends, I’d wager back in 1990 Lucas wasn’t quite as liberal with his intellectual property as his is today. Can we say Family Guy Star Wars Trilogy, anyone? Plus, Spaceballs had just come out at the end of the 80’s. Sorry, I suffer from Shiny Kitten Syndrome, and tend to get off topic now and then. Ooh, a rhinestone! 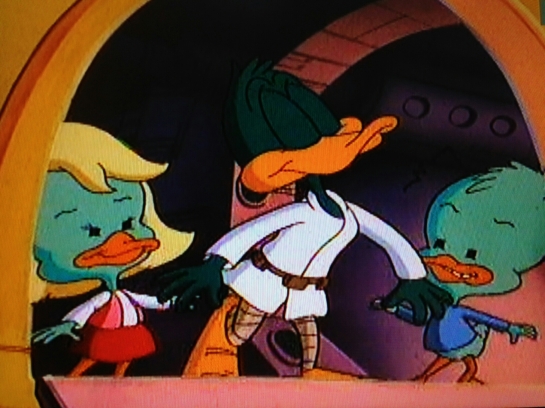 Buster, Babs, and Hampton stand around Craft services discussing salaries, and how much the duck makes. Babs says that’s what she hears. Hampton asks with or without points, and Babs replies, with. Buster says that can’t be right, he’s not even the star, and demands to get his agent on the phone. The director calls for the scene to begin, and the trio get a quick touch up before “action” is called. Buster restates that Plucky has been duck napped, and tells the others to meet him in the prop department, before looking tearfully at the sky and saying they’ll find Plucky, wherever he is. It’s worth pointing out that this is 9 years before Family Guy and cutaways happened. 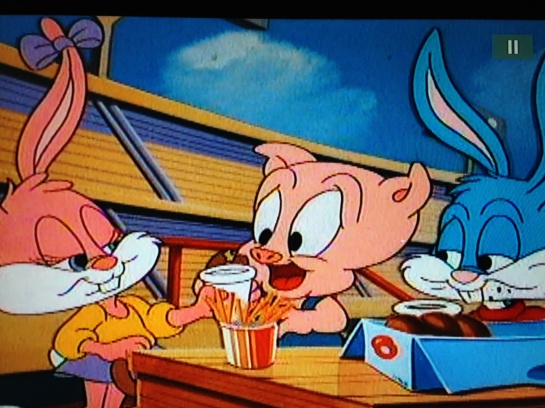 Back on Planet X, Plucky is being put through hero tests to show the Talosian-esque elders that Plucky is worthy. First up, G forces in a giant paddle ball. Where, upon his exit, Plucky’s head is still moving back and forth. What kind of test was that? Next test, weightlifting. They drop a giant slab on Plucky, and when he can’t lift it, the elders get frustrated. I’m guessing they wished they’d been in the paddle ball to administer the test, personally. Kids show! Stop it! 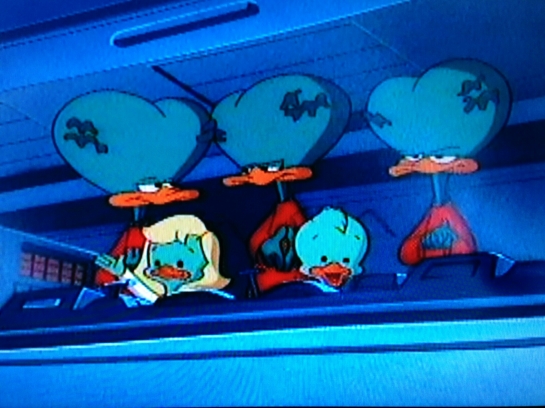 In Acme Acres, Plucky’s friends are looking through the prop room. There’s a crate labeled Rose Bud, as well as one labeled Lost Ark. Nice one, Steven. Nice one. Hampton says he’s found what they’re looking for. It’s a giant crate labeled Duck Dodgers (in the 24th 1/2 century). Buster opens the crate, and they get inside. There’s a costume change, of course. Buster is serving up Han Solo realness, Babs is featuring Princess Leia eleganza, complete with the Leia buns, while Hampton is debuting R2D2 couture. Now they can save Plucky!! 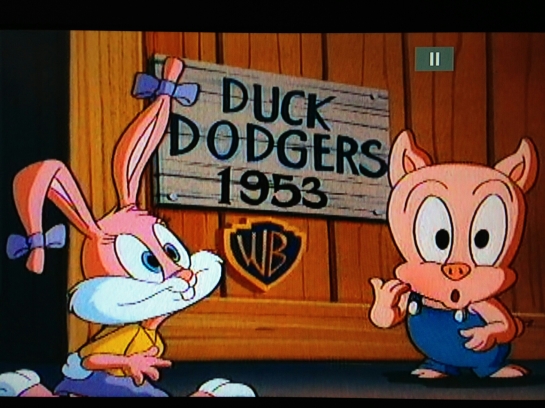 On Planet X, guards throw Plucky, Frank, and Ollie on a ship, stating it’s the ultimate chance for Plucky to prove himself. Plucky quips about being a busy leader, and goes to recline in his royal bean bag chair. Only it isn’t a chair. It’s the missing member of the Star Wars homage. No, it isn’t 3PO. No, it isn’t Obi-Wan. It’s Chewcudda, the bull. Yay, puns! Plucky sticks out his tongue, and the bull charges. We’re given a warning; never show Chewcudda anything red, not even your tongue. This warning is given from Ollie, while sporting a red skirt. They’re also inside a red ship. Whatever. The Chewcudda warning is there for plot purposes, not to make sense. The ship gets taken into custody by Duck Vader. Plucky attempts to stand up for them, but gets zapped for his trouble. 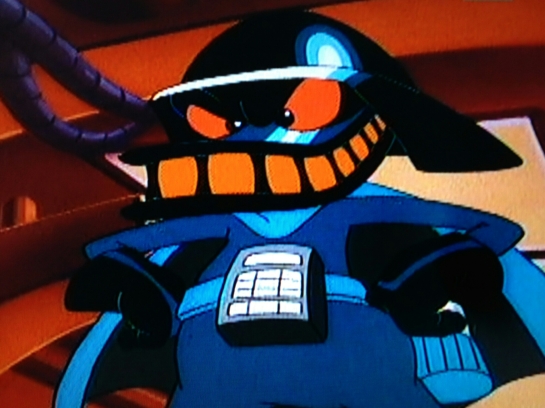 In space, no one can hear you quack. Buster doesn’t know how they’re ever going to find Plucky. Babs says they’ll use their Acme computer, and one of Plucky’s feathers. They put it in the computer, and it starts laughing. Not because it’s small, but because it tickles. You readers are sick! I’m talking about the feather. 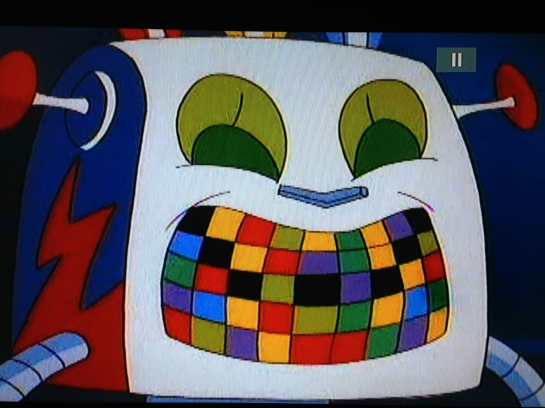 Plucky is bound on a table in the star destroyer. He asks his captors why they’re called Storm Troopers, and in true toon fashion, they make storm sound effects and sprinkle him with water. He had to ask. Duck Vader arrives, and says his laser will turn Planet X into goat cheese, but first he’s going to test it on Plucky. In a very 007 style trap, the laser turns and starts it’s way up between Plucky’s legs. I’ll leave that one alone. 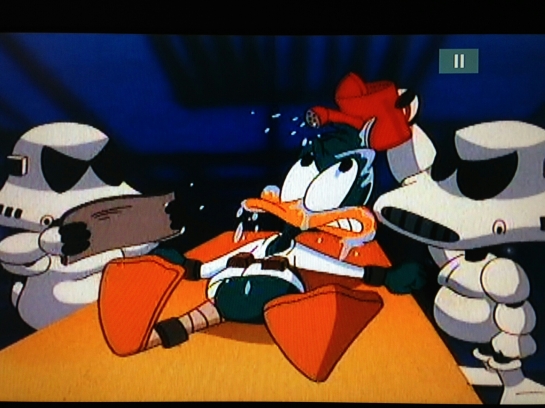 As the laser gets closer, he asks Plucky if he has any last words. Plucky says he’s allergic to goat cheese, and violently sneezes the laser broken, and himself free. He, Frank, and Ollie all run away. They make it to an elevator, and Plucky confesses to lying. The other are disappointed in him. Now their planet will be destroyed. Plucky says he’ll fight. He’s not running another step. The doors open, and they’re outnumbered by troopers. Ok, maybe just a few more steps. 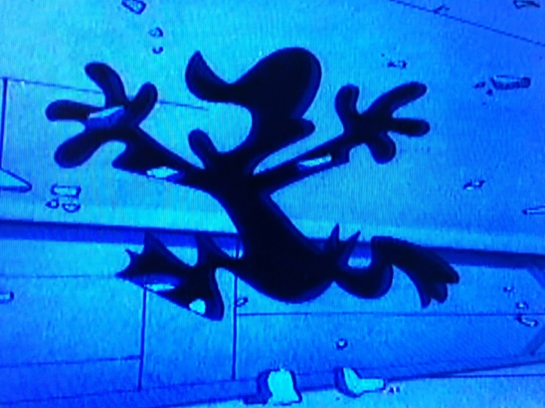 Duck Dodgers’ ship is still laughing it’s rear thrusters off. I said laughing, not getting. Anyhow, at this rate they’ll never find Plucky. Babs has an idea, and the three of them start peeling onions. They’re crying. The computer is crying. The ship is crying. The computer says it’s been bad. Buster puts on a helmet to look outside and see where they are. I’ll repeat that, he puts on a helmet. No spacesuit. No oxygen. Just. A. Helmet. Remember that. Even though they’re toons, they can’t breathe in space. 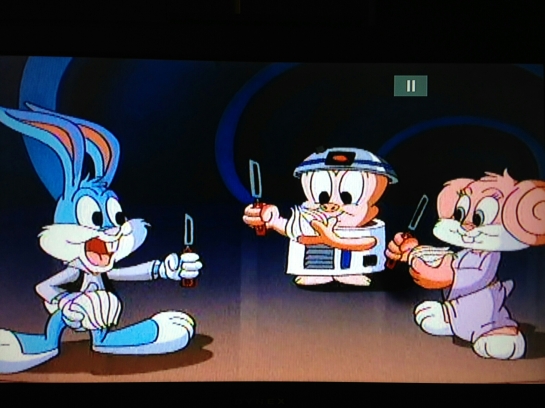 Buster bangs his head on the star destroyer, and the computer shows that Plucky is aboard the ship. Buster pilots it inside, with no resistance. All enemy ships welcome. Come take potshots at our exhaust vent, it’s only two meters wide. They park near the Tardis, the Enterprise, a Tie-fighter, and the ship from 2001 A Space Odyssey. I love visual gags built in for adults. 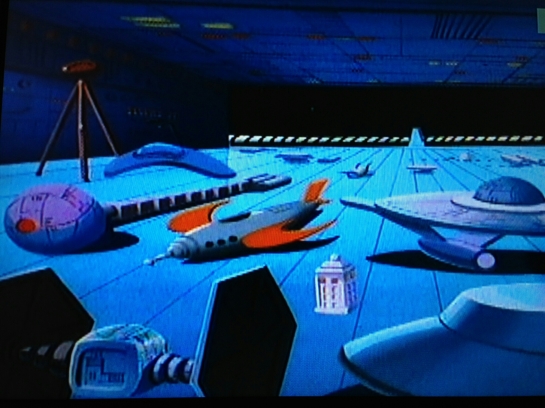 Plucky and the others hear the two minute warning to the destruction of Planet X. Plucky offers the following not at all helpful pieces of advice: “Never say never. Nobody can beat you but you. Let the force be your umbrella. If you believe you can do it you can do it. A stitch in time saves a lot of embarrassment. You can lead a horse to water but a pencil must be lead.” When the going gets tough, this duck goes bye-bye. Somehow, it whips Frank and Ollie up, and when Buster and Babs Bunny, no relation, come through the door, they get whooped. 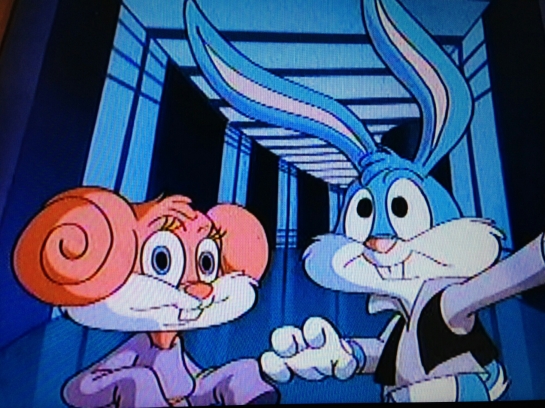 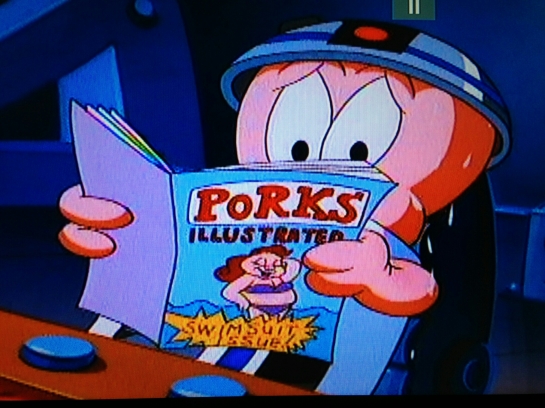 In the laser room, the troopers are preparing to fire on Planet X, while Chewcudda is bound, and grazing. Meanwhile, Buster unleashes a can of sleep spray that knocks the troopers out. I should mention that their eyes close, despite the fact it’s their helmet. Toon Logic, I suppose. Plucky days he’d like to see Duck Vader stop them now. Wish granted. Vader appears from a lift in the floor, and Babs tells him he smells like 30w motor oil. Buster snatches her away before he bangs her with his finger. Ok, that was dirty, but he does have a finger zapper, and uses that, rather than, what if it weren’t copyright infringement would be, his lightsaber. 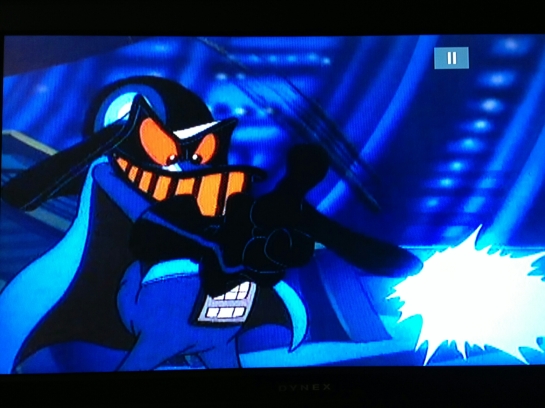 Plucky comments on Vader’s anger, and calls him steam iron breath. Ooh, burn! Vader says they can cheer him up by standing on the platform. Buster says no thanks, helmet head. Ooh, double burn. Hope they have aloe in space. Plucky says he can’t make them. Vader then threatens to finger bang Hampton. Dunno if he’d really mind. Sorry, kids show! Wait, adult readers. Bang that pig, Vader! Make him squeal like a, oh forget it. That one’s too easy. Babs says the platform looks nice. Buster says the pig works cheap. Plucky says that he’s getting double scale for this episode. Ouch! Money burn! 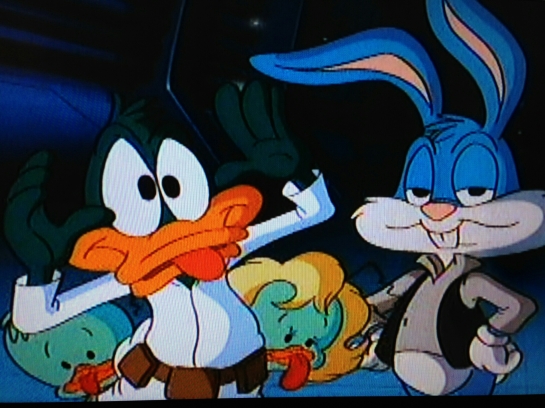 As Frank and Ollie ponder all the advice Plucky gave them, they settle on Ollie’s warning about Chewcudda. They charge at Duck Vader, who shoots at them like ducks in a gallery. A blast opens the fridge, and there’s a bottle of Acme Ketchup near a gallon of milk from discontented cows. They cover Vader in ketchup, and Chewcudda does the rest. He knocks Vader into a console that causes the laser to destroy the ship. Buster and company get flung into space with no helmets, and live. Funny, he needed one earlier. On Planet X, Frank and Ollie are made the new leaders, as Plucky complains, before uttering the phrase, if I’m lying may I be zapped by a laser. Several lock-on to him, and credits. 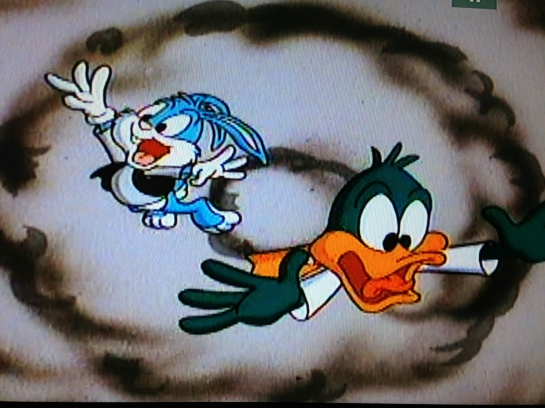 If you’ve never paid attention to the credits of Tiny Toons, or Animaniacs, I highly suggest you do. There’s usually a gag credit. This one is; Secret of Quality Amination – Lotsa Shadows. They also end with the “star” of the episode saying something to close it, ala Porky. Plucky appears, and says “parting is such sweet sorrow”. Happy Star Wars day, everyone! 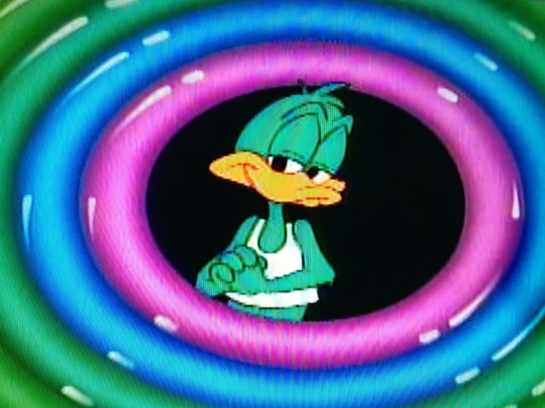